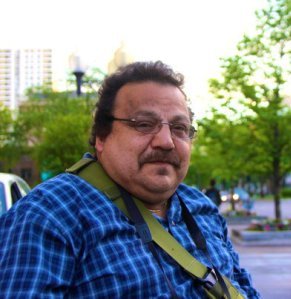 Gary Moostoos was astounded about his 15 minutes of fame that has unfolded in a way he never could have envisioned. Moostoos became the centre of media and public attention after he was banned from Edmonton City Centre Mall on October 27. He is a member of Sturgeon Lake Cree Nation and works as an Elder and Cultural Support Advisor at Boyle Street Community Services. Moostoos is well known and respected in the Native and inner city communities and has garnered enormous support since the incident.

While eating a meal in the food court, much like he does almost every day, Moostoos said he was approached by security personnel who began to question him. 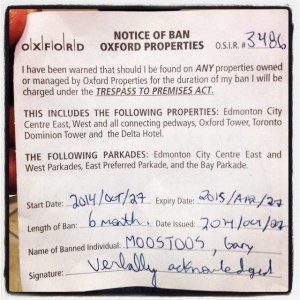 “They asked me for my name and I asked: Why?”

They told him he was being observed and was suspected of being involved in suspicious activity. They said he “looked familiar” like a person they had previously banned.

“I told them: I’m not alright with this I want to speak with your supervisor.”

During the altercation Moostoos turned on his cell phone video recorder. The captured footage is almost 10 minutes long and includes a female voice stating that he is a “known violent man.”

He said he told himself to remain calm and keep his composure.

“I said: You’re going to tell me who I can and cannot talk to? I talk to the people that nobody wants to talk to. I help people. That’s what I do. I’m not going to refuse anyone. I’ve had gang members come and cry to me to help them. You’re telling me I have no right to talk with these people?”

His ID was checked and his name cleared but soon after up to 10 security officers gathered nearby and asked him to leave. Moostoos was given a six-month ban notice and escorted off the property. 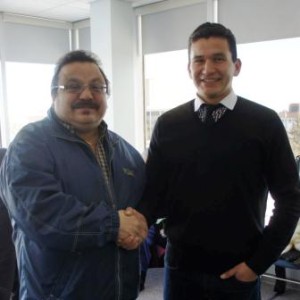 Feeling humiliated and breaking down at home that night he smudged and said a prayer. He discovered a deeper purpose to the experience and saw an opportunity to make good of it.

“I asked creator: Why have you put this on my plate?” said Moostoos. “Then I understood. This is what needed to happen. I can’t stay quiet about this, it needs to be told.”

His sister encouraged him to share what happened online. From there, social media exploded with messages of support, which flowed in from coast to coast.

Ultimately, Moostoos believes he was a target of racial discrimination because of his Aboriginal decent. He said he all too often hears from Aboriginal clients about similar experiences – this is not an isolated incident and that it regularly happens across the country.

Today was an overwhelming and emotional day for Moostoos, filled with press interviews and combing through hundreds of messages of support. Boyle Street commented via their official Twitter account that the treatment of Moostoos by mall security was “appalling.”

“I’ve been in my office all day crying here and there,” he said.

“I didn’t realize that I was anything special. This is the first time ever I’ve had my door closed because when I’m here my door is always open, but today I can’t.”

The management of Edmonton City Centre issued the following statement:

“Our top priority is to ensure that Edmonton City Centre is a safe and positive environment for customers to visit and shop. In response to an incident that occurred on October 27, 2014, the management of Edmonton City Centre is committing to review the interaction between our security team and an individual who was subsequently banned from the property.

“Management will be conducting an investigation that will include reviewing the engagement by security, the policies we have in place and the training we provide. We will also be reaching out to the individual to request a meeting as part of this review.”

Moostoos said he hadn’t checked his telephone messages as of yet, but heard the management wanted to meet with him this Thursday.

He is considering seeking the support of a lawyer to advise and accompany him to the meeting. He hopes that this will encourage Edmonton City Centre to reexamine their policies in dealing with Aboriginal patrons.

There is a flash mob round dance planned for Saturday, November 8 at City Centre Mall in solidarity with Moostoos.

Click here for updated information including video and a statement from Mayor Don Iveson.

Be the first to comment on "Respected Elder banned from city mall in Edmonton, says he was racially profiled"