(ANNews) – Strathcona High, an Edmonton Public Schools District high school, known as Scona, is located at 10450 72 Avenue. Originally constructed to hold 1200 students the facility underwent $455 million in renovations in 2014/15 and that number has since increased to about 1500. Historically, the school, like many throughout the country, did not have a great deal of Indigenous representation or programming that was Indigenous-specific, but in recent years that trend has changed and today, cultural programs are regularly scheduled.

The most recent cultural activity at Scona took place on Tuesday, November 29 when the Founding Cultures Club hosted a Métis Cultural Celebration and Indigenous Cultural Market in honour of Métis Week, an annual event that celebrates Métis culture and identity.

I was introduced to the classroom by Taylor Rubin, the Cultural Liaison: Student Services at Scona, Avalon and Lendrum Schools. A University of Alberta graduate who earned both her Bachelor of Education degree and her Community Service-Learning Certificate in 2014, Rubin is also a Scona High School alumni.

A half dozen students, who were introduced as part of the Fun and Culture Group, welcomed guests as we arrived at the classroom door to participate in the school’s 2016 Métis Week event. In all, the initiative saw more than 60 students and guests participate and enjoy such things as Métis dancers, learning basic beadwork, line and round dancing, visiting one of the crafts booths or munching on some very tasty student-made cupcakes.

“The Scona’s Founding Cultures Club,” explained Rubin, “is a revamped version of a previous club here at the school. Our purpose is to bring students together who share a common interest in Indigenous issues and activities. This club is fully inclusive, all students are welcome. The goal is to have our students take a lead role in the majority of our meetings and activities. With a diverse group of students, we look forward to learning from one another and giving students the opportunity to share their knowledge and strengths. I look forward to supporting all First Nations, Métis and Inuit students here at Strathcona to be successful, well-rounded individuals.”

Rubin, an advocate for social justice and community-based learning, was “born and raised” on Treaty 6 Territory. She knows the community and what it offers and is able to connect students with supportive members of the community who aid and encourage them in their personal growth. Benefits derived from these connections include such things as employment, volunteer opportunities, academic support, cultural growth, health and wellness activities and more.

Kayla Mockford, a Métis student of Dene/Scottish ancestry, welcomed the students and guests to the event, noting that “it is important to honour and celebrate Métis culture and recognize them as a distinct people who have brought yet another meaningful way of life to Canada.”

Educational entities and students and chaperones from numerous other schools also attended the Scona event. These included Lendrum Elementary, Avalon Jr. High, J. Percy Page, Centre High, FNMI Education and the University of Alberta. Sharon Morin, the manager of the St. Albert-based Heritage Museum also attended and offered students the opportunity to learn a few basic finger-weaving techniques that they could take home and practice with. She was accompanied by St. Albert Museum employee, Brett Lamoureaux.

“I really enjoy coming out to these types of cultural events,” noted Morin, who for many years has been involved in local initiatives designed to promote and enhance Metis culture, identity and participation. “The finger weaving technique I share with the kids is fairly simple and it allows them to make some unique items – both for themselves, their family members and friends.”

The braided strands she demonstrated to the students can be made to any length, and used for such as things as bracelets, neck-pieces, bookmarks, zipper pulls and as identity tags on luggage and suitcases when travelling away from home.

“The girls catch on to it but the boys excel when it comes to finger-weaving,” smiled Morin, noting that, “boys play more video games and as such they have very dexterous fingers.” 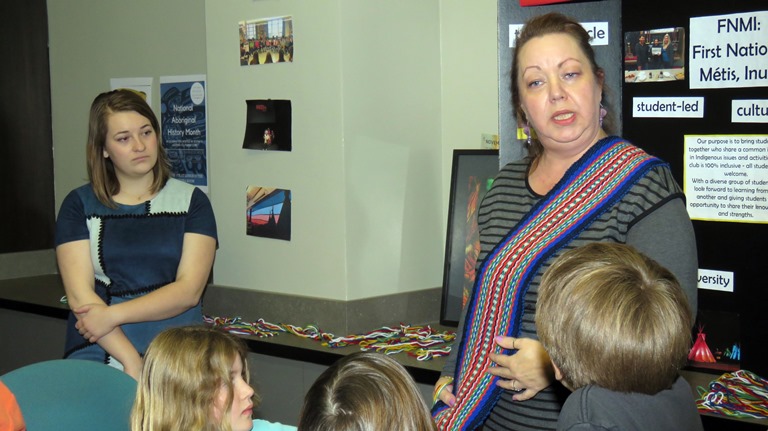 Morin visits many schools over the course of a year to work with students and conduct culturally-oriented artistic workshops that encourage awareness of Métis traditions. Together with Terry Lusty, Calvin Bruno and others, Sharon Morin participates on the Amiskwaciy History Series, which is broadcast on Shaw TV’s Cable 10. The Amiskwaciy History Series is an Aboriginal led grassroots initiative aimed at creating awareness regarding the often-untold Indigenous history of the Edmonton area. The name Amiskwaciy comes from Amiskwaciy Waskahikan or “Beaver Hill House,” a Cree term used to describe the area now known as Edmonton. Through free monthly educational sessions, the Amiskwaciy History Series is designed to provide accessible and culturally appropriate education to the public on Aboriginal history as lived and told by the people. 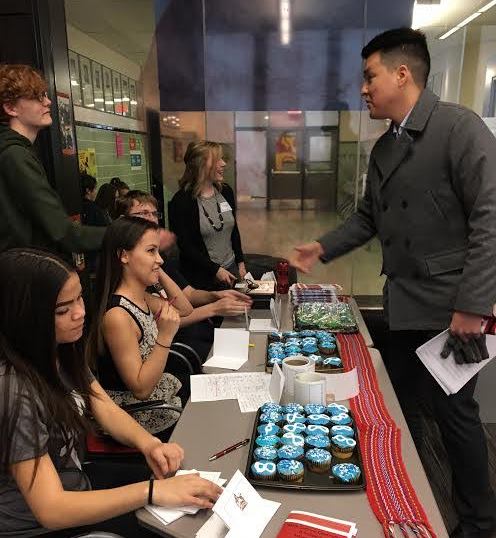 “Naim initiated the program because he wants to see more of our boys involved in sports, particularly basketball, something he is quite good at,” explained Amiskwaciy Academy teacher and sports buff, Terrace Mah. “Naim is working with two other role models, Michael Swampy and Dakota Nepoose. They attend university and both are young, healthy and community-involved Aboriginal guys who are making a positive difference in the lives of some of these kids.  Youth need role models and they need to participate in activities that keep them healthy and I believe the basketball program has improved attendance and the overall well-being of the student body.”

The basketball program has become a source of pride and achievement for the school.

“This is our first year as participants in the Metropolitan League, a league that sees various schools within the district compete in high school basketball. We play games every week and we pretty much have a full complement of players,” noted Mah.

Two University of Alberta students, Ambrose Cardinal and Cassidy Halcrow attended the Strathcona celebration and performed several traditional Métis dances. Ambrose is a member of the Student Council while Cassidy is a representative of the New Studies Student’s Association.

Cardinal has been jigging for about a year. Originally from Prince Albert, Saskatchewan, he hopes to pursue a career in physiotherapy and is currently in his second year as a Kinesiology student. Halcrow, who has been involved in powwow dancing for three years, has been dancing the Métis jig for about one year. She is enrolled in Education and Native Studies. Both students are among a group of university students making an effort to have Native Studies mandatory in all faculties.

“I’d like to one day see Indigenous education taught in every school from elementary to high school to post-secondary through university,” noted Cardinal. “It’s important that all Canadians come to know and understand all of the diverse cultures that we celebrate in Canada.” 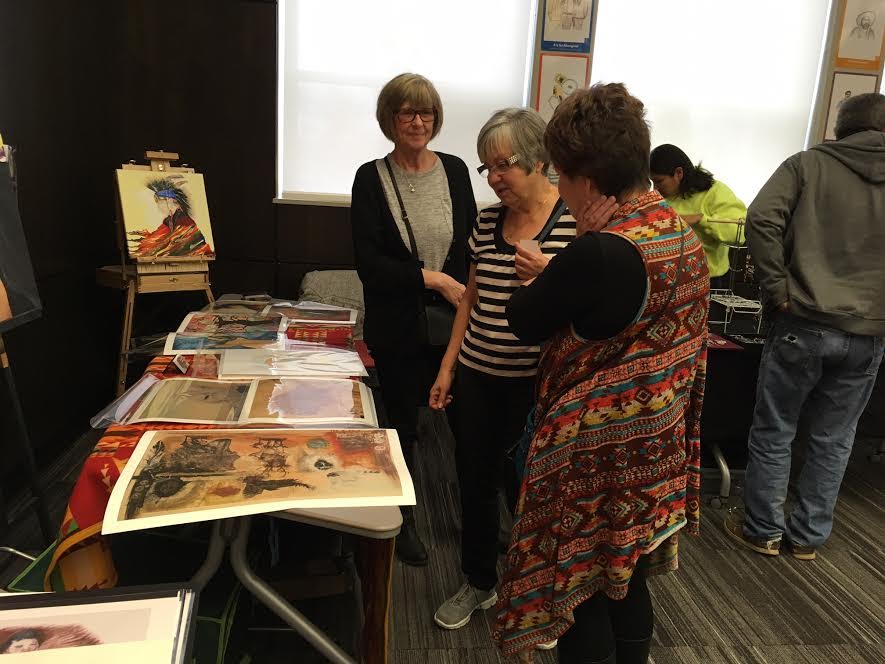 Visitors look over some of the artwork available at the crafts booth.

Métis Week, an annual event that celebrates Métis culture and identity, was designed to coincide with the death of the Right Honourable Louis Riel, who was executed by the Government of Canada  in Regina, Saskatchewan on November 16, 1885. Each year on this date a commemorative ceremony is held in his honour. The ceremony “symbolizes the commitment Métis people share in striving for and promoting the visions of Louis Riel and is one of the most important dates on the Métis calendar.”

In addition to recognizing Louis Riel Day on November 16, the Métis Nation of Alberta (MNA) declared the week surrounding November 16 as “Métis Week” and has hosted the annual event for the past eight years. The week is devoted to commemorating the sacrifices of the Métis, who continue to strive toward rights and recognition as a distinct nation. The legacy of Louis Riel, a devoted Métis political leader who sacrificed his life defending the rights of the Métis people, continues to inspire both Métis youth and adults as it resonates throughout the Métis homeland.