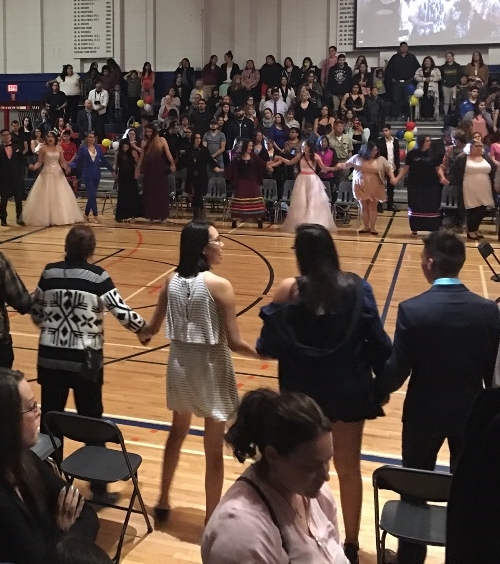 (ANNews) – For the past ten years the Edmonton Public School Board (EPSB) has celebrated the outstanding accomplishments of First Nations, Métis and Inuit students from across the district in an honouring ceremony dedicated to their academic achievements.  On May 25, 2017, W.P. Wagner High School, on Edmonton’s Southside, hosted this auspicious and well attended event.

“You are a generation of overcomers, you are a generation of champions,” announced School Board Trustee Sharon Adams to the crowd of beaming graduates and proud families.  “This is an incredible journey you’ve been on, you’ve made your mark,” continued Adams. “Now begins the next season of your lives.”

After a sumptuous feast prepared by W.P. Wagner’s students of culinary arts, Principal Jennifer Allen welcomed the honourees and their families in a reception held before the commencement.  Next, parents, grandparents, aunts, uncles, siblings and friends crowded into the gymnasium while excited graduates, dressed to impress, took their places at the front of the seating gallery.

As a circle of drummers began to play, MC Devin Bellerose explained to the audience that “the closest a person will ever be to another person is during the nine months they live in their mother’s womb.  The beat of these drums symbolizes the heartbeat of our mothers, our givers of life – and these rhythms heal us.”

First the graduating students formed a circle and began a celebratory round dance, and soon, spectators flocked to join turning the procession of dancers into a sea of rhythmic bodies joined hand-in-hand.

Edmonton Public School Board held an Honouring Ceremony for its Indigenous Graduating Students and their families.

Student MCs Nick Cook and Tiawan Makokis took the podium expressing their sincerest hopes for the success of the 2017 graduates.  Each student, they explained, would be given a blanket in recognition of his or her academic achievements.  The blankets, the MCs continued, would help to heal and protect the graduates along their future paths.  Each student’s name was announced, the community from which they came, their graduating high school, future goals and a favourite quote.  There were students who adorned themselves in full traditional regalia while others wore glamorous prom dresses.  Some students chose inspired quotes of inspiration and reflection, while others took a more jovial route and selected iconic lines from pop-culture, like one taken from Ferris Bueller’s Day Off: “Life moves pretty fast; if you don’t stop and look around once in a while, you could miss it.” 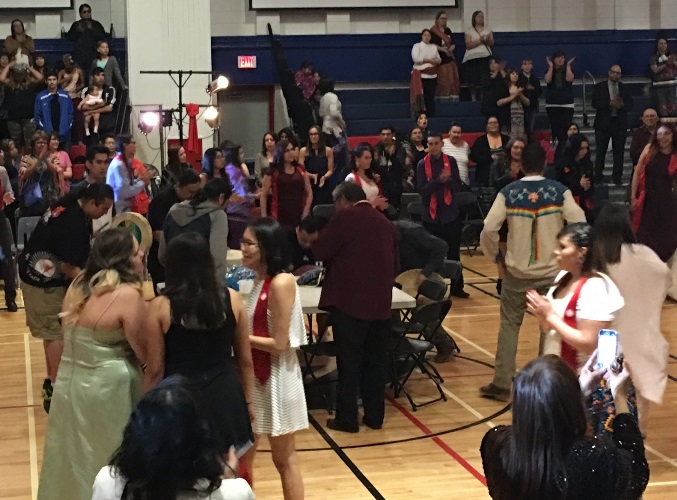 ESBP Honouring Ceremony for Indigenous students in the graduating class of 2017.

Perhaps the most touching of moments was when five young women ascended the podium carrying their infant children – a true demonstration of strength and perseverance.  Both the names of mother and child were called for these graduates – the insurmountable odds that these young women overcame brought tears to the eyes of strangers and family members alike.  The ambition that empowered these honourees to succeed and contribute positively to the world around them was evident to all as the MCs announced their future career goals: social work, nursing, teaching.  Their ability to care for their young children while succeeding in school was a moving reminder of what amazing feats can be achieved through sheer determination.

In August 2015 Arik Motskin and Zach Gallinger of The 10 and 3 reported that Canada, with a high school graduation rate of 85%, was slightly above the world average.  However, as Motskin and Gallinger observed, these statistics were far lower than the national average in Alberta and the territories.  Although Maclean’s Magazine, according to Motskin and Gallinger, theorized that Alberta’s 69% high school graduation rate stemmed from the province’s wealth of lucrative employment in the oil fields and trades, The 10 and 3 disputes that this statistical disparity is due to the province’s education system failing to support its Aboriginal students.  In an article published by the CBC in December of 2015, Geordan Omand reported that British Columbia’s graduation rate for Aboriginal students climbed from 54% to 63%, but still fell short of the province’s overall average of 85%.

“Your journey reminds me of David and Goliath,” remarked Trustee Sharon Adams.“David stood up against a giant – but he was the champion.”  The David and Goliath analogy in reality is very much synonymous with the obstacles faced by First Nations, Métis and Inuit students who after a lifetime of being marginalized are expected to compete in academic environments that fail to adequately support them.

Despite these averages the graduates of 2017 defied statistics.  What was most clear when listening to the dreams the graduates had for their futures, was how inspired and motivated they all were to make a lasting impact on their communities.  EPSB Superintendent Darrel Robertson was the final speaker for the evening.  He jested that it was ironic that he became so passionate about education after he himself had not taken high school too seriously.  Robertson praised the students for investing in themselves through education and predicted great things for the next chapter of their lives.

He told the students:

“It will happen, a door will shut in your face. But the fact that you sit here today shows that as you encounter life’s obstacles, you will always find a way around them.”

As the excited graduates began filing out of the gymnasium ready to celebrate with family and friends, the shadows of camera flashes still flickering in their eyes, there was a sombre tone of a chapter ending.  The students, many of whom did not know one another before the event, hugged with well-wishes and promises to keep in touch.  One could overhear excited chatter about acceptances letters from MacEwan, NAIT, U of A and even UBC.

2017’s EPSB First Nations, Métis and Inuit graduates are, as Adams stated, champions!  But they also stand as a reminder that throughout Canada there is a very real disparity of privilege – there is a present need to find new and effective ways of properly supporting and encouraging Aboriginal youth.  While we as a nation speak of reconciliation many are still encumbered by social barriers; one of the most essential aspects of this desired healing is the universality of education.