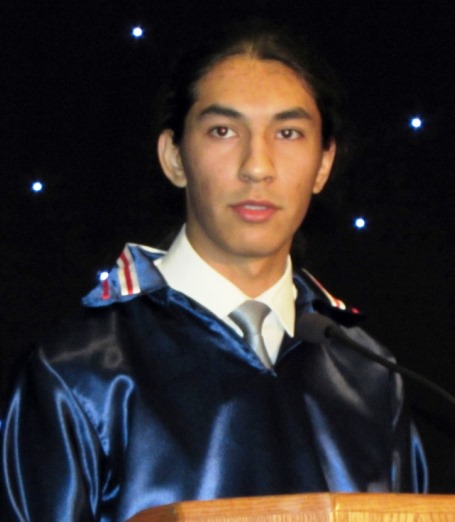 (ANNews) – He’s a laid back guy – chill they say these days. He’s easy to get along with and he’s both liked and respected by his peers, his teachers, school administrators and just about everyone else who has ever met him. But more than that, he is an achiever, a mentor, a role model, an accomplished musician, a valedictorian and the recipient of the Edmonton Catholic School’s 2016 Superintendent’s Award of Excellence.

His name is Rio Satchel Houle, a Grade 12 student who will graduate from Edmonton’s Blessed Oscar Romero High School later this month. He will enrol in the University of Alberta’s (UofA) Bachelor of Arts program later this year, where he will work to gain his post-secondary degree in music.

“Being named valedictorian was a very special moment for me,” smiled the 17-year-old. “I also feel honoured to have been chosen for the Superintendent’s Award for Excellence. I guess what they say is true; hard work does pay off.” 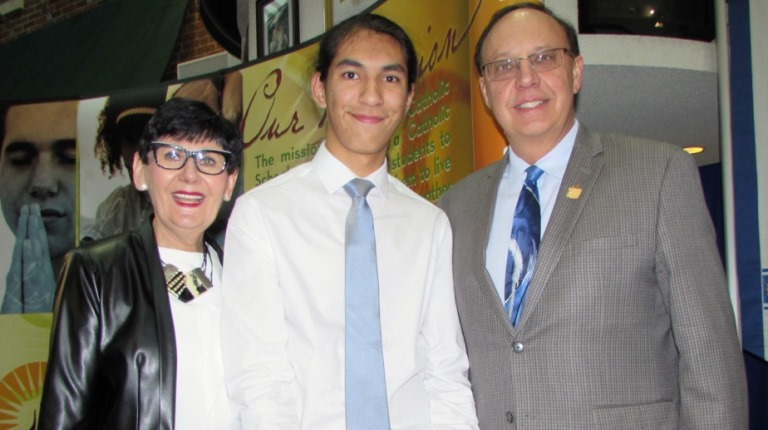 Blessed Oscar Romero Principal Simon Pryma agrees. He referred to Rio as “a hardworking and industrious student who keeps up with his studies, acts as a mentor to students needing some extra help and by his actions and commitment, he’s a role model respected by his peers and looked up to by younger students. He’s also an incredible guitarist with a good understanding of music.

“Rio is a self-driven individual who works hard to accomplish his goals. The Superintendent’s Award for Excellence is the most prestigious award offered by Edmonton Catholic Schools and is testament to Rio’s dedication to his education and his determination to succeed. He graduates in two weeks and he will be missed by staff and students alike.”

“I can’t say enough about the help and encouragement I’ve received from everyone at the school – my teachers, the staff, and Principal Pryma,” noted Houle. “The atmosphere at Oscar Romero is conducive to good learning; everyone is supportive and passionate about what they do. Many of the teachers as well as the principal are among the best I’ve ever had; I really enjoyed coming to school every day.”

Houle said that working with and encouraging younger students is “something that I am always happy to do; everyone benefits. Working with other students enables me to better my communication skills and gives me some insight into the teaching profession. My communication skills have continued to improve each year and I find that offering academic advice to others has helped me to grow as a person.” 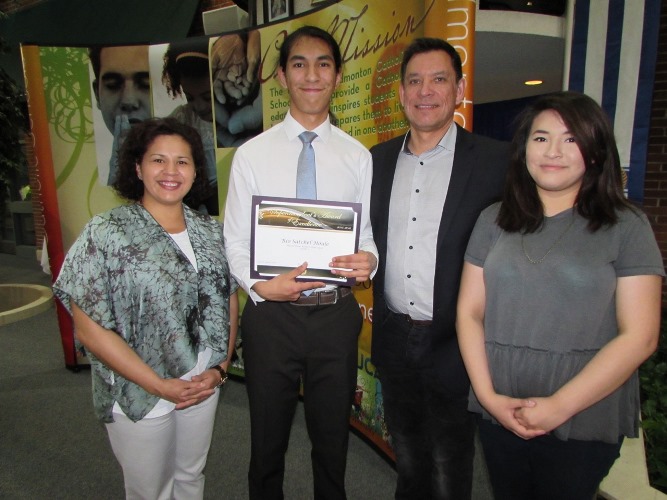 He also credits the Edmonton Catholic Schools’ Braided Journey’s Program for much of the success and growth that he’s experienced while attending high school.

“When I first signed up for the program,” admitted Houle, “I did it to lessen the load of classroom work, but I quickly discovered that the Braided Journey’s initiative had a great deal more to offer than I knew at the time. I met many interesting and important role models and came to understand the significant role that Indigenous people have played throughout Canada’s history. I’ve learned a great deal about my culture and our traditions and as a result I want to learn more and I want to continue to improve myself, both scholastically and as a person.”

The Braided Journeys program is designed to support First Nations, Métis and Inuit youth in their quest to become leaders of character, vision and action. Students are provided multi-component, culturally-based programs that challenge their creativity, build on their skill set, and increase their support network. In addition, youth have the opportunity to develop citizenship skills, thus enhancing self-esteem and confidence. Participants also gain skills from a variety of cultural and leadership activities that include goal setting, problem-solving, healthy risk taking, physical competence, teamwork, interaction, leadership and outdoor education.

One of the components of Braided Journeys is the Blanket Exercise, an initiative that explores the relationship between the Crown and Indigenous peoples in Canada, from the settlers’ arrival to modern times. Participants are guided through the impact of colonization of a nation including gradual appropriation, relocation, and removal of Indigenous peoples and territories. 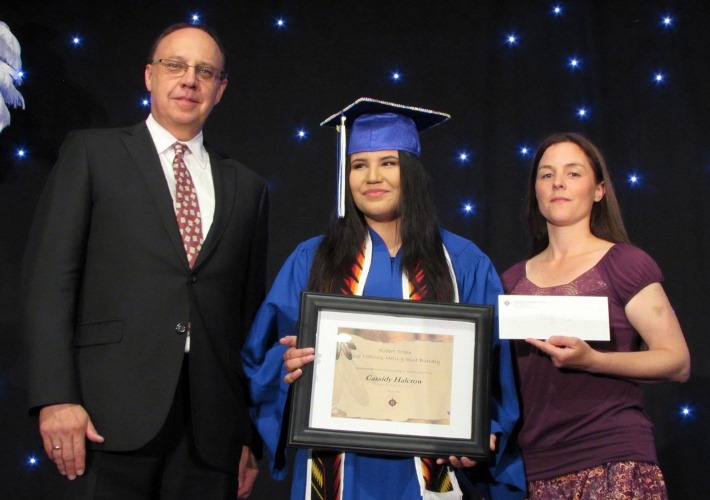 “Rio has played an instrumental role in developing the Blanket Exercise, a project that our students have delivered on numerous occasions,” said Principal Pryma, adding that he “is excited about the initiative and the educational” message that it delivers. “It is a unique undertaking that sees participating students deliver a story that walks the audience through Indigenous history before the coming of the settlers. It focuses on culture and tradition and spirituality but it also delves into the struggles faced by Indigenous peoples, including the injustices that befell them. It’s a remarkable initiative that everyone can learn something from; I know I did.”

The Blanket Exercise was offered in Social Studies and Canadian Studies classes in area schools, including a presentation at the UofA.

Rio is the first Indigenous student enrolled at Oscar Romero to receive the ECSD Award of Excellence. Each year every Edmonton Catholic high school submits the names of two deserving senior high school students and one junior high student as candidates for the Superintendent’s Award. 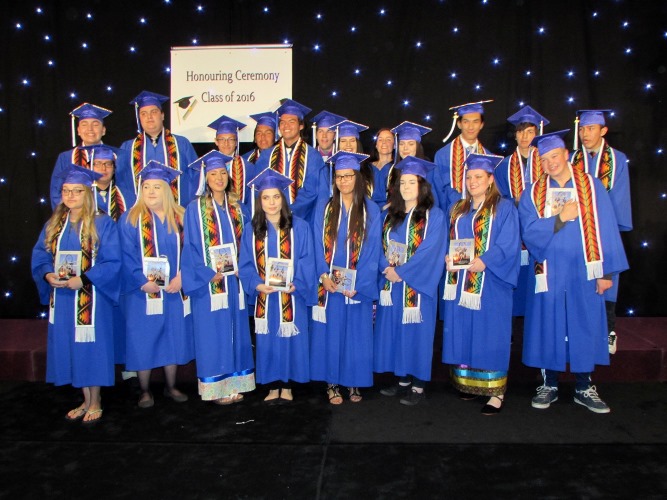 Honouring Ceremony for the Class of 2016

“I am both pleased and honoured to have been selected as a recipient of this significant award,” he reiterated. “It will add even more incentive for me to continue to work hard as I continue my journey.”

Rio was a participant in a recent Minister of Education propelled initiative that encouraged students to work together to come up with an action plan for fulfilling the recommendations of the Truth and Reconciliation Commission’s Final Report. Rio along with other Oscar Romero students and students from more than a half dozen area high schools, participated in the initiative. He credits Dwight Paul, a member of the Paul (Band) First Nation for giving him added insight and knowledge.

“He comes to the school each Tuesday and does smudges with the young men; he tells stories and shares knowledge and gives encouragement; I’ll miss those visits.”

What recommendations would Rio Houle (and his peers) like to see be put forward for consideration?

“An Indigenous History core in 10-20-30 (Grades 10-12) in all high schools; availability of Indigenous language courses/programs; Elders and role models as regular guests and speakers; Aboriginal History as a core subject – even an online course would work; a spiritual space, not too intrusive and if there is room, a place to smudge.”

“Rio has always been driven,” noted his father Floyd proudly during an interview after his son was named a recipient of the prestigious superintendent’s award. “He’s worked hard and any success he has in life he will have come by honestly. He’s goal-driven and doesn’t quit until he achieves it. He’s an accomplished musician; he’s very aware of social issues and succeeds because of the instilled values passed on to him. He’s 17 years old and already knows what his life’s work will be; he’s his own man that’s for sure – and a really good one at that.”

“He’s always been an achiever; he doesn’t know the meaning of the word ‘quit’ and when he sets a goal for himself he works at it until he succeeds,” she beamed. “When he was just four years old he wanted us to buy him a Game Boy, but we said that couldn’t happen until he was able to read. He took that to heart and before his next birthday he could read almost anything; he got his Game Boy. And that was just the beginning. Over the years that followed Rio kept his nose to the grindstone, often giving up an evening out with friends so he could complete his studies, both scholastically and musically. And it’s paid off in hearts; in two weeks Rio Houle will graduate with honours and will soon be enrolled in university where he will work to achieve his goal of becoming a composer.”

Heather continued, “When he applied to the university’s music program, he had to audition; he had just six weeks to learn how to play the classical guitar. He practiced long hours and after the audition was over, he was accepted into the program. Rio knows how to achieve his goals; we are so very proud of him. He will succeed no matter the career path he chooses to follow.”