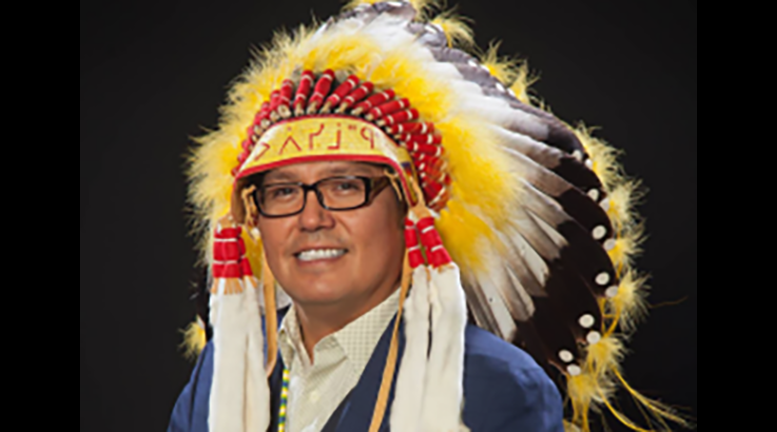 Okimaw Vernon Watchmaker is Grand Chief of the Confederacy of Treaty 6 First Nations.

(ANNews) – The Confederacy of Treaty Six First Nations are so disillusioned and upset with the Alberta government that they have dissolved their historic protocol agreement with the province.

Late last year, the Confederacy and the Alberta Government partnered in a protocol agreement meant to facilitate meetings between the two parties.

The agreement outlined a formal process for ministers and Chiefs and Councils to meet periodically throughout the year in order to discuss topics such as land, resources, health care, education, and so on. The agreement also committed to an annual meeting between the Premier of Alberta and the Chiefs of the Confederacy and was considered to be a “promise between governments about communication and collaboration with a focus on shared prosperity, now and for years to come.”

However, on June 2, the Confederacy announced that they have dissolved the agreement.

In a press release the Confederacy says that they have ended the relationship because the Government has been making unilateral decisions without consulting First Nations.

Grand Chief Vernon Watchmaker said, “The decision to dissolve the Agreement was made by the member First Nations at the Assembly meeting (in May). When we gave our notice, we left the door open to discussions when the Government was ready to work in a more effective and collaborative manner.”

Things appear to have escalated recently as the Grand Chief was “appalled” by the Premier’s comments in defense of the glorification of residential school architects whose names are currently attached to schools and other public places.

Last week the remains of 215 First Nation children were found in a mass grave at a former residential school in Kamloops, BC. With the discovery came a resurgent of calls to remove the names of residential school architects from schools, train stations, and more.

For example, an LRT station in Edmonton is named after Bishop Vital-Justin Grandin, an early supporter of residential schools who lobbied for their funding. There are also schools named for Bishop Grandin in both Edmonton and Calgary.

Premier Kenney, in response to the name-change calls, said “I think Canada is worth celebrating. I think Canada is a great historical achievement. It is a country that people all around the world seek to join as new Canadians.”

He said Canada “is an imperfect country, but it is still a great country.”

“Just as John A. Macdonald was an imperfect man but was still a great leader.

“If we want to get into cancelling every figure in our history who took positions on issues at the time that we now judge harshly, and rightly in historical retrospective, but if that’s the new standard, then I think almost the entire founding leadership of our country gets cancelled,” said the Premier.

In response to the Premier’s comments, the Confederacy said,

“Just when we think we are experiencing acts of reconciliation, the Premier contradicts all the efforts toward an understanding and confirms that the Treaty Six Chiefs made the right decision to dissolve the Protocol Agreement that was made.”

Grand Chief Watchmaker continued the sentiment by saying the Premier was insensitive to Indigenous people.

“Statements such as those grounded in the Doctrine of Discovery bring dishonour to the Crown and reveal an insensitivity that it is difficult to deal with,” said Grand Chief Watchmaker.

“The real Canadian story is that we entered into a Peace and Friendship Treaty with the Crown. Sir John A McDonald acted inhumanely toward First Nations, he aggressively implemented policies and legislation in order to assimilate our people at all costs and we continue to deal with the aftermath to this day.”

Richard Feehan, NDP Critic for Indigenous Relations, made the following statement in response to the dissolution of the Protocol Agreement between Treaty Six and Alberta:

“I am profoundly saddened and frustrated to see Premier Jason Kenney inflict so much damage on the relationship between First Nations and the Province of Alberta.”

“It’s clear from Grand Chief Watchmaker’s statement that the Kenney government has failed to work collaboratively with Treaty Six First Nations for some time,” continued Feehan.

“While Albertans are confronting the horror of a mass grave filled with the remains of hundreds of Indigenous children, the premier felt that was the moment for him to defend one of the central figures in the residential school system.”

“This follows a determined effort by the Kenney government to delay teaching the history of residential schools in their draft curriculum, in clear contravention of the Calls to Action of the Truth and Reconciliation Commission.”

“Through their words and actions, Jason Kenney and the UCP are unravelling years of work towards reconciliation,” concluded Feehan.