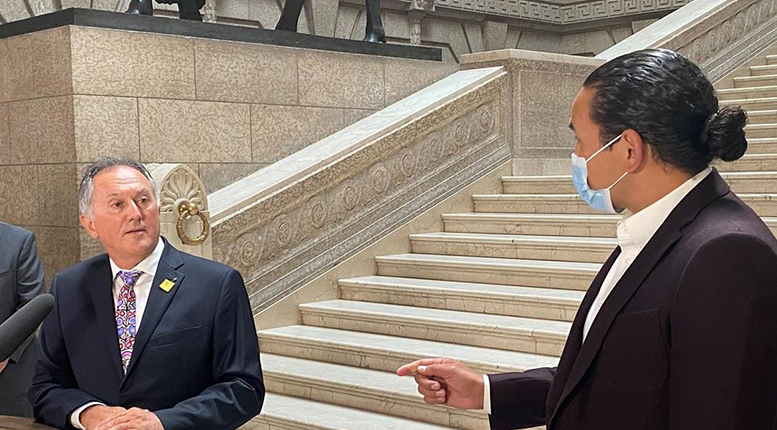 (ANNews) – In a dumpster fire of attempted reconciliation, the Manitoba Minister of Indigenous Relations has apologized for his comments on Residential Schools in which he said the system was created with good intentions.

On July 15, shortly after being sworn-into the position, Minister of Indigenous Relations Alan Lagimodiere said in his first press conference, “The residential school system was designed to take Indigenous children and give them the skills and abilities they would need to fit into society as it moved forward.”

“I am an honorary witness to the Truth and Reconciliation Commission. I’ve listened to the stories of the survivors and I cannot accept you saying what you just said about Residential Schools,” said Kinew.

“It was the expressed intent of Residential Schools to kill the Indian in the child. It is not cultural relativism, it is not revisionist history for us to say that [the residential school system] was wrong.”

“We’ll give you a chance,” said Kinew. “But you can’t be out here defending Residential Schools if you want to work Indigenous communities.”

“Killing the Indian in the child was wrong. That’s what they talked about at the time when they were started. When they were run. We all know that was wrong, so you have to move past that,” concluded the Leader of the Opposition.

While Minister Lagimodiere, who is Metis himself, released a statement to Twitter on Thursday saying he misspoke, he released a formal apology the day after.

“I would like to offer my sincerest apologies to all Indigenous and non-Indigenous Manitobans, and Canadians whom I have offended greatly with my remarks yesterday,” Lagimodiere said in the statement.

“I want to acknowledge the words I used to respond to a question about residential schools, during my first scrum as a new minister in this very important portfolio, were wrong, and I genuinely and sincerely ask for your forgiveness.”

However, the Minister and the Government of Manitoba have received much backlash.

Murray Sinclair, former senator and chair of the Truth and Reconciliation Commission said, “They are trying to unring the bell now.

The Manitoba Metis Federation president, David Chartrand, also commented on the situation by saying, “He’s raised in the North. There’s no way in hell this would be his position. He’d know the struggles of the Métis.”

“It’s just heartbreaking to watch this happen in front of us, and for a Métis person to sell their soul, or sell their principles, just to have that title of minister,” Chartrand said.

“I’m saddened he’s allowed himself to be used by this premier.”

However, the Progressive Conservative party caucus accused Kinew of having bullied the minister in a since-deleted Tweet.

”The political showmanship of storming into someone else’s press conference to bully a minister who was sworn in only 10 minutes earlier does nothing to advance that reconciliation.”

Fortunately, the National Centre for Truth and Reconciliation (NCTR) released a statement in support of Kinew “standing up for Truth.”

In fact, the NCTR even extended a gracious invitation to Minister Lagimodiere to visit the centre to be educated.

Edmonton Mayor Don Iveson also applauded Kinew. He tweeted, “Let’s start with the truth. As a fellow honorary witness for the Truth and Reconciliation Commission of Canada, thank you for honouring your oath in a powerful way.”