(ANNews) – The Bigstone Cree Nation and the Bigstone Cree Empowerment Society (BCES) have been working hard this year to have culturally relevant artifacts returned to the community from their current resting place in the Edmonton-based Royal Alberta Museum (RAM).

To enhance the success of that effort they have just completed a refurbishing and renovation project that has turned a former band office into a new museum. Most (2/3) of the funding for near-$100,000 renovation project came via the Bigstone Cree Nation’s trust fund; the balance came from the Municipal District of Opportunity.

President of the Wabasca and Area Museum Society, Elder Mike Beaver and members of his team met with RAM last month; the mission was to secure a deal that would see a number of artifacts returned to the community on a long-term loan basis. A permanent transfer down the road would be possible if the building that houses the artifacts is equipped with the necessary housings or casings required for permanent protection against the elements. 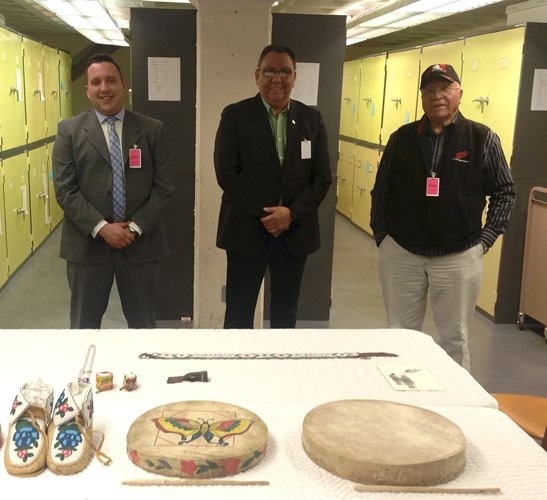 “There’s a long history on a wide range of the objects we are seeking to have returned by the museum,” noted BCES President Travis Gladue-Beauregard, in a recent interview.

“For example, some of the artifacts in question were acquired from Bigstone members that were former patients at the Charles Camsell hospital. The background and history of these objects is quite diversified. We are currently working with the provincial government because the responsibility for the RAM falls under its jurisdiction. At this time there is no repatriation legislation in place and the rules that govern these issues are outdated and no longer valid.

“What I hope to see is for the Notley government to introduce a Repatriation Act; at the moment we have to go through a loan process. A repatriation act would enable the Métis, Inuit and First Nations in Alberta to have returned to them what is rightfully theirs.

“It doesn’t really matter how an artifact was acquired – where it was taken, bought or traded, there still needs to be the formation of a repatriation act because these artifacts are culturally and spiritually important to our people, to our communities. These artifacts can highlight a community; they encourage cultural awareness, enhance community pride and restore personal values.”

Gladue-Beauregard said he hopes that the repatriation efforts by the Bigstone Cree Nation will help enable other nations to do the same.

“We have embarked on this journey not just for ourselves, but for every Indigenous community and nation in Alberta,” he stressed.

“Repatriation definitively falls in line with reconciliation and we are confident that by working together with government and the Royal Alberta Museum we will soon have our artifacts returned home.”

Support in the community and within other Indigenous communities has been strong; area politicians including Fort McMurray/Cold Lake MP David Yurdigahave have endorsed the work being done by the BCES.

In May, 2016 Alberta introduced Bill 22, An Act to Provide for the Repatriation of Indigenous Peoples’ Sacred Ceremonial Objects.

This was called “the first step in helping to ensure that all Indigenous communities will be able to reclaim sacred ceremonial objects in provincial collections.”

Under Bill 22, the RAM and Calgary’s Glenbow Museum have returned numerous artifacts to the Blackfoot, Siksika and Blood Nations in southern Alberta.

Gladue-Beauregard said items don’t have to be considered sacred or ceremonial to be intricate and important objects with significant cultural and traditional value. He wants to ensure that repatriation of artifacts isn’t relegated to specific items only, especially when there are so many important and meaningful artifacts that don’t fall under the ceremonial or sacred banner.

“This isn’t about picking fights or laying blame. It’s about reconciliation and repatriation, it’s about compromise and working together – if we can’t do that then we’ve really got more growing up to do. I don’t have any issues with RAM, in fact I am grateful to them.

“They go through the loan process and like us, they follow the rules they are governed by. I am grateful to the RAM for meeting with us but at the same time I do think we need more provincial and federal involvement as far as implementing a National Repatriation Act goes.

“We need an Act that will apply fairly and evenly to all First Nations, Métis and Inuit; an artifact considered sacred by the Blackfoot might not have any relevance to the Cree and that concept applies across all Indigenous nations.”

Gladue-Beauregard said he’d like to see legislation that is clean and clear, transparent and applicable to every Indigenous community that has a list of artifacts and culturally relevant material they want to see returned to their communities.