Powwow season was launched in Edmonton this month with a hugely successful, extremely well attended and culturally beautiful event.

Saturday, May 9, marked the 34th anniversary for the Ben Calf Robe annual powwow which returned to the Commonwealth Recreation Centre, which is “a wonderful venue,” says organizer Rhonda Metallic.

The event attracted a crowd estimated to be about 1500 for the day’s opening Grand Entry with Elder Betty Letendre offering the opening prayer. Once the day was over that 1500 increased to approximately 3000 powwow participants! 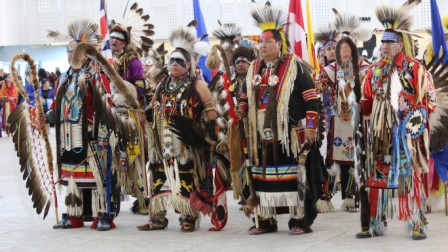 The Grand Entry at the 2015 Ben Calf Robe Powwow was a magnificent display of culture and artistry. Article and Photos by Terry Lusty

Devon Bellerose was at the helm serving as the main emcee of the festivity. He swiftly introduced the crowd to the vibrant colours and sizzling energy of hundreds of dancers – traditional, fancy jingle, grass, and so on.

According to Metallic, registered dancers were logged in at close to 500, an increase of well over 100 more than the previous year, 2014. The Stoney Park Drummers/Singers from Morley, Alberta, was the host drum this time around. All told, the drum groups numbered no fewer than 27.

In addition to the Eagle Staff bearers were those marching under banners that included these headings – First Nation, Métis, Alberta and Canada. There were also special dignitaries representing the Aboriginal Veterans Society, the Canadian Armed Forces, City Councilors Tony Caterina and Andrew Knack, the Ben Calf Robe Society and school staff and board members. Chiefs Tony Alexis, Kurt Burnstick and Calvin Bruneau also participated in the march as well as First Nation princesses, powwow volunteers and many others. 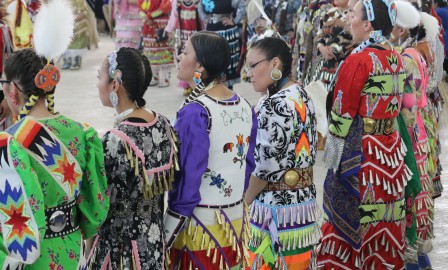 Traditional dancers never fail to grab the attention of visitors and other dancers on the powwow trail.

Metallic couldn’t help but heap all sorts of praise on the wonderful work of the volunteers, those who make the event happen. “They’re amazing!” chirped Metallic. Hosting the visiting Elders and volunteers, she added, was thanks to the thoughtful partnering of the city’s Aboriginal Relations Office in the CN Tower in downtown Edmonton. The partnership is now in its third year and also entails helping with the traditional Giveaway  Ceremony.

Two noticeable differences at this year’s powwow was the improved lighting and the increased number of vendors, 40 in total, that featured leather and beaded crafts, blankets, beads, bones and bells, artwork and, of course, the ever-present moccasins.

Inside the Recreation Centre were 30 retail sales booths plus 10 more dedicated to providing information about some of the community’s various services and programs, while eight others (food vendors) were situated outside the building. The most popular food vendor was Native Delights, which has a huge following all over Native country. 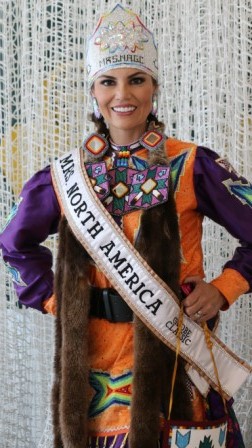 Among the royalty present was Mrs. North America in the person of Lisa Ground from the Enoch First Nation on the outskirts of Edmonton. The attractive and likable mom is somewhat new to her role having been crowned a mere two months ago. Her first major travel gig will involve a trip to China in the very near future. Needless to say, it’s an excursion she looks forward to with great anticipation. You can follow her at: www.facebook.com/MrsGlobe.MrsUSGlobe.

Ben Calf Robe organizers were absolutely delighted with this year’s powwow as it progressed from noon until 10 p.m. Everyone’s behavior was extremely commendable said Metallic who was likewise thrilled that there were no major accidents or negative incidents, especially given the large numbers of people in attendance. She further extended her appreciation to the Elders and community members who keep the traditions alive and the youths who volunteered their services and helped deliver water and chairs to the Elders and the physically challenged.

As for the future, “we’re really excited for next year,” she said.  “We thank all the volunteers, dancers and community. We look forward to seeing them all on May 7, 2016.”

That will likely prove to be an exciting and memorable occasion as it will mark their 35th anniversary!