(ANNews) – The 2016 Ben Calf Robe Powwow was an extraordinary gala that took place in Edmonton’s Commonwealth Community Centre on Saturday, May 7.

The 35th annual event, which appeared to be one of the biggest ever, heard from a variety of guest speakers and dignitaries, each of whom was ushered into the large arena as a Grand Entry participant in a long and winding line that included Chiefs from across the province, Ben Calf Robe/Edmonton Catholic School District administrators and staff, Elders, Aboriginal leaders, local and provincial government dignitaries and invited guests. 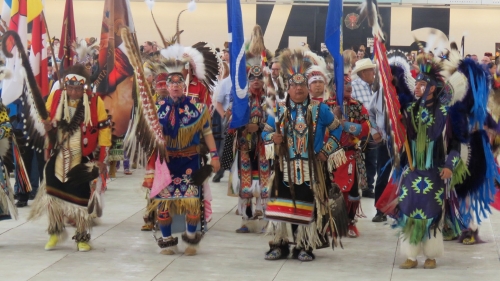 Leading the 1 p.m. Grand Entry procession were the flag and staff carriers, each of whom was dressed in full regalia, a sight, noted visitor Sandra Collinsworth that gave her “an awesome and breathtaking experience. It’s the first time I’ve been to a powwow; I didn’t know what I was missing. It is so beautiful, so energetic.”

Aiding and encouraging the Grand Entry walkers and the 900 or so beautifully clad powwow dancers biding their time on the sidelines, were the songs and drum beats that filled the large room thanks to the outstanding performances by the 27 different drum groups in attendance, led by the host drum, Blackfoot Confederacy Singers. 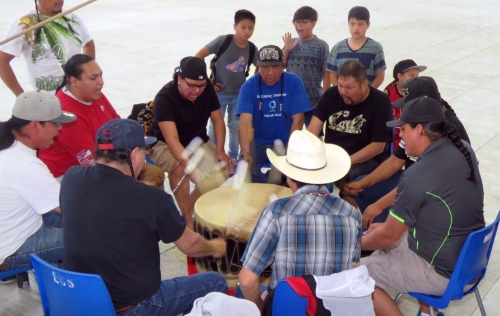 Powwow dancers come in all shapes and sizes, all ages, men, women, boys and girls – each clad in their own colours, their own regalia, most of which is hand-made and all of which are beautifully designed and illustrated. Masks, headwear, buffalo horns, feathered staffs and an array of splendorous costumes move across the vast dance floor like waves across an ocean. Some chatted, some chanted, most danced, moving to the rhythm of the drums. Some moms and dads glided slowly across the dance floor as they escorted the tot-aged dancers they’d brought with them. 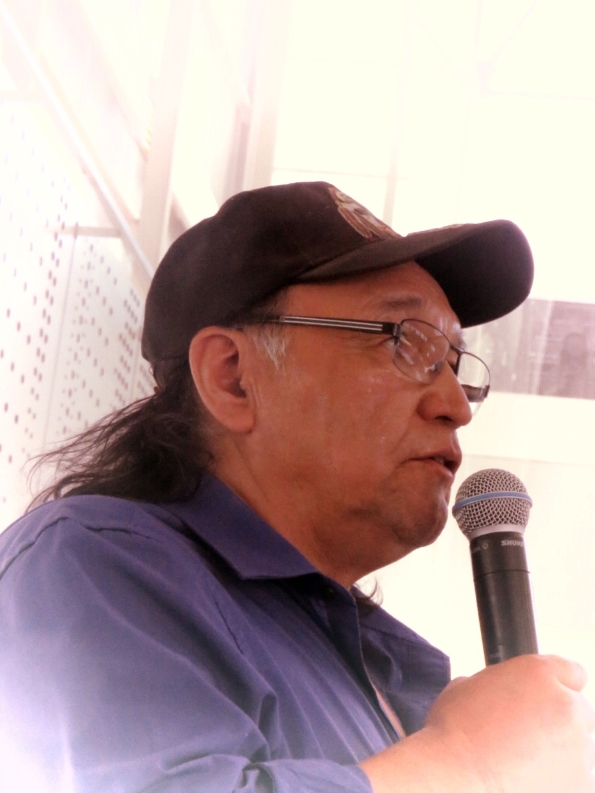 Master of Ceremonies, Jason Goodstriker, got the annual event underway when he introduced Council of Elders Chair Betty Letendre and Powwow Committee Elder Fred Campion. Elder Letendre welcomed the dancers, spectators, and dignitaries and spoke briefly about the history of the event, noting how honoured she was to be part of the annual celebration for the past 32 years. Elder Campion delivered a prayer to bless and open the 35th Annual Ben Calf Robe Powwow. Goodstriker called on others to say a few words including ECSB Trustee Cindy Olsen, ECSD Superintendent Judy Carr, Alberta’s Minister of Indigenous Relations Richard Feehan, Edmonton City Councillor Tony Caterina, Treaty 8 Grand Chief Steve Courtoreille and Treaty 6 Grand Chief Tony Alexis. City Mayor Don Iveson also said a few words to the several thousand people who filled the Centre. It is estimated that about 7000 people made their way to the event over the course of the day. 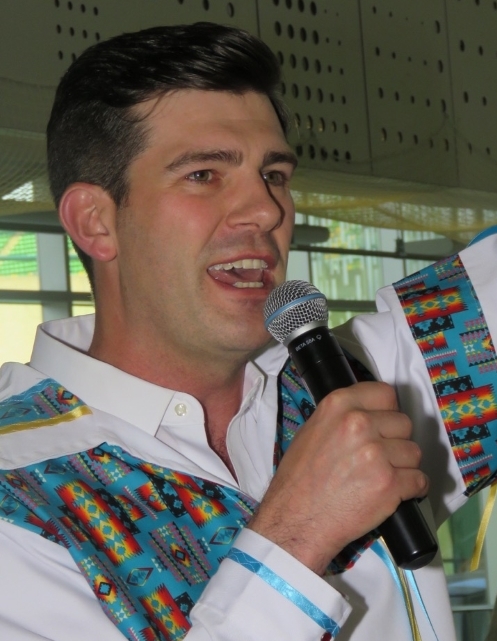 “It is always good to hear the drums of all the Nations participating at this important event,” he said. “It is a beautiful thing to join together to celebrate Indigenous culture and tradition. The City of Edmonton is happy to play host at this venue, as a partner on the podium with Ben Calf Robe. They do a phenomenal job and the powwow keeps getting bigger every year – if this continues we’ll have to find a bigger venue.” 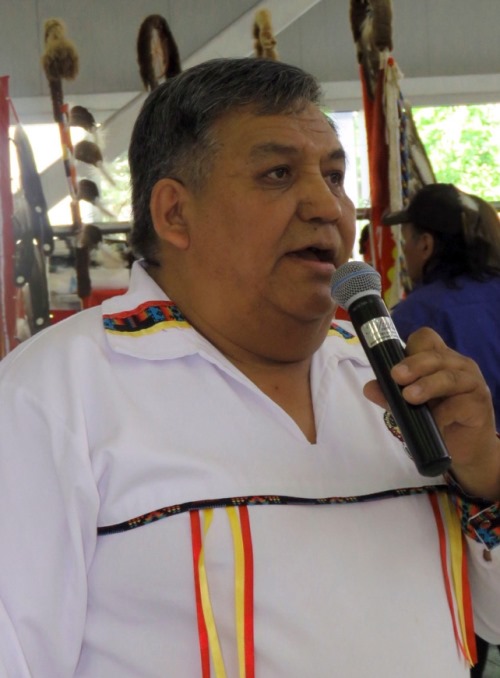 Grand Chief Courtoreille, who is also Chief of the Mikisew Cree Nation, located in northeastern Alberta in close proximity to the fire-ravaged city of Fort McMurray, commented on the dangers people are facing in the north and the burdening issues that many people, now homeless and destitute, will be facing during the coming months. He encouraged support for everyone affected by the fire and asked that people be as generous as they can to help support the thousands who were forced to flee in the homes in Fort McMurray and it threatened neighbouring communities. 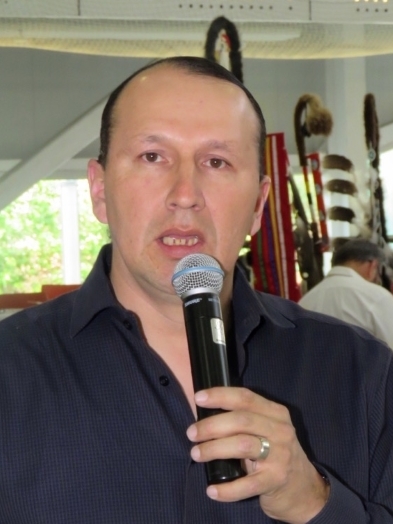 Grand Chief Alexis reiterated those thoughts and later commented on the significance of the traditional powwow while congratulating Ben Calf Robe School and the Ben Calf Robe Society for the “outstanding work” they’ve contributed over the years to ensure the successful initiative continues well into the future.

Jason Goodstriker, a polished professional within the Powwow circuit, saw to it that the agenda maintained its expected pace. He effortlessly delivered his comedy routine, offbeat jokes and ongoing banter, never missing a beat and ensuring that participants and guests alike understood that protocol reigns supreme when it comes to hosting and participating in traditional powwows. Goodstriker is an all-season powwow participant; he does it full time.

“I used to be involved in politics and was once the AFN’s Regional Chief for Alberta (2003-2007) but I’ve given that up to go back to what I’ve been doing for the last 23 years, announcing and MCing on the powwow circuit. I believe I have a responsibility to continue; it gives me balance and it allows me to participate in sharing my culture, our traditions and our beliefs.” 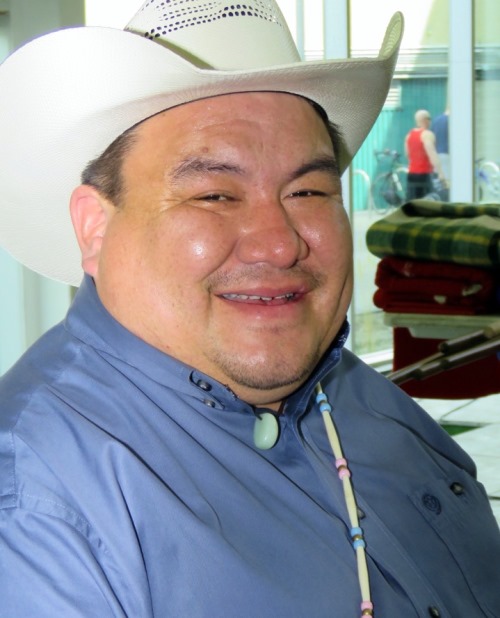 Including Ben Calf Robe, Goodstriker has participated in nine powwows so far this year and expects to be at many more. He also participates as a conference facilitator, presenter and keynote guest speaker. He’s at his busiest during the Powwow season – which runs from May through November, though most held after September take place in the United States.

“This is the time of year that the circuit really gets busy,” he explained. “Ben Calf Robe is among the biggest powwows that people attend each year. I don’t work exclusively in Alberta; I also travel to powwows in Utah, Wyoming, Washington and Colorado.”

He spoke about powwow protocol and the importance of understanding the meaning and the occasion behind each song.

“Part of my job is to know and understand what type of song needs to be played for each occasion that comes up; for instance you’d drum and sing a different song if one involved a give-away dance while another was designed to honour a family member or pay tribute to someone who has passed on. The powwow is an event that brings families and strangers together; it is an important gathering that honours our people and our Nations in the spirit of song. Every song comes from a different tradition; the Cree have their songs and the Blackfoot have theirs and though they are different in language and personal meaning they are all spiritual by nature.” 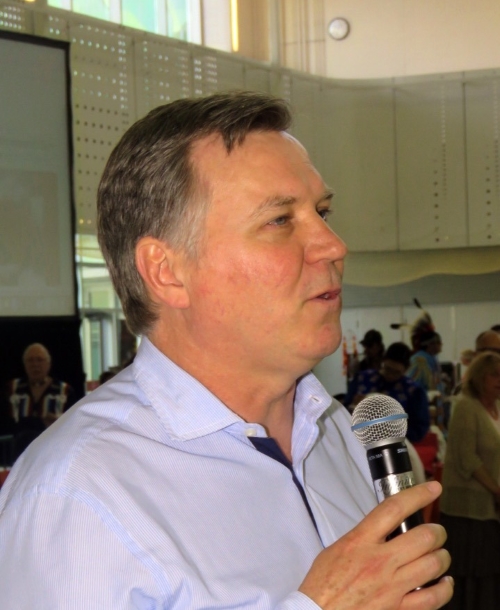 Goodstriker noted that a recent change in law via the Supreme Court of Canada has ruled in favour of the Métis Nations and peoples of Canada. ‘For the first time ever, I incorporated a call for the Métis to come to the floor and dance. I was very pleased with the result. I’m very pleased that the crowd was so appreciative,” smiled Goodstriker. “It was all in good spirit; just as the mayor said: dancing and enjoying life together is indeed a very good and pleasant thing.”

They came, they participated and they conquered the crowd with individual and collective renditions of the Red River Jig. In an interview, Elder Betty Letendre talked about the powwow, lauded the efforts of everyone who’d worked so hard to ensure another successful outing and noted that “it is important that everyone know that no one is left behind at the powwow. Every person from every culture is invited to attend. The Métis have always been included and it was special this year when Métis dancers were asked by the Master of Ceremonies to showcase their favourite dances.” 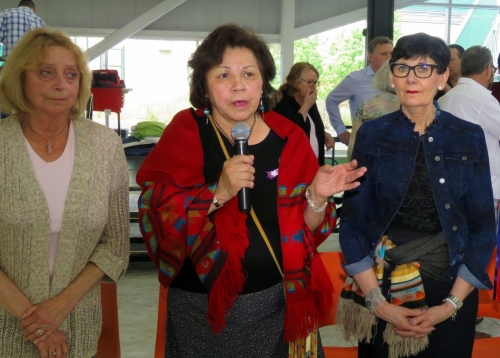 The Elder also talked about her 32 year experience with the annual powwow.

“When I look at the 35 year history of the Ben Calf Robe Powwow and see the people gather together as they are today, I realize just how far we’ve come,” she noted.  “There was no truth and reconciliation in those times; we worked hard and we worked together to achieve the results you see here today. Some things don’t change; we still work hard to ensure the success of the event.

“This very first powwow took place in the gymnasium at Ben Calf Robe/St. Clare School and there were about 250 people in attendance. We have participation from the First Nations, Inuit and Métis communities just as we’ve always had. When we come together for a powwow no one is left behind – that’s what it means to host a traditional powwow. There are no winners; there are no losers; there is no competition. When money becomes involved in just about any project, the dynamics change considerably. The Ben Calf Robe Powwow is a powerful and spiritual event that makes me proud of who I am as an Indigenous person. I think a lot of people here today feel the same way. Anyone who says we can’t or don’t work together is mistaken, a fact that is obvious by what we have seen here today. The Edmonton Catholic School District has stepped up to the plate each and every year to make this event a special day for everyone.” 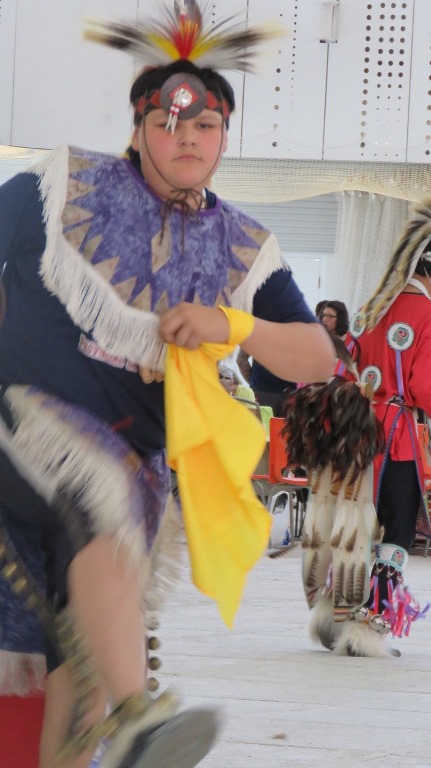 Leo Wells is the lead drummer/singer for the Blackfoot Confederacy Singers, this year’s Host Drum. He said that the Ben Calf Robe Powwow “is a very special and very spiritual event and one that I hope will always be held as a traditional powwow.”

A career teacher who instructs students in Grades 5 through 12 during the school year, Wells and his group, many of whom are teachers or employed in other areas of education, only participate in powwows in the southern regions of the province until the end of June, but when school is out the brakes come off and the group catches up with the circuit and stays with it until the beginning of September.

“I’ve been participating in powwows for the last 10 years and make it to about 12 every season but some of our lead singers join up (temporarily) with other groups when school is in. We have about 15 active members in the group.”

Drinking and partying or acting foolish are no-no’s within the Blackfoot Confederacy’s built-in but unwritten bylaws, something Wells says he never has to remind his members of.

“There’s a time and place for everything,” he said. “The powwow is a time for sobriety, a time for spirituality, a time to rise to the occasion, to honour your Elders, your culture and traditions, your family, your heritage, the Creator and yourself. It was an honour to have been chosen as the Host Drum for the 35th Annual Ben Calf Robe Powwow; we will be back.” 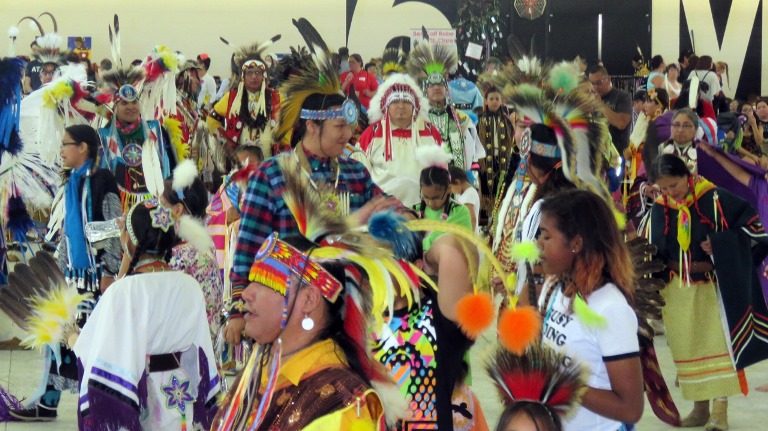 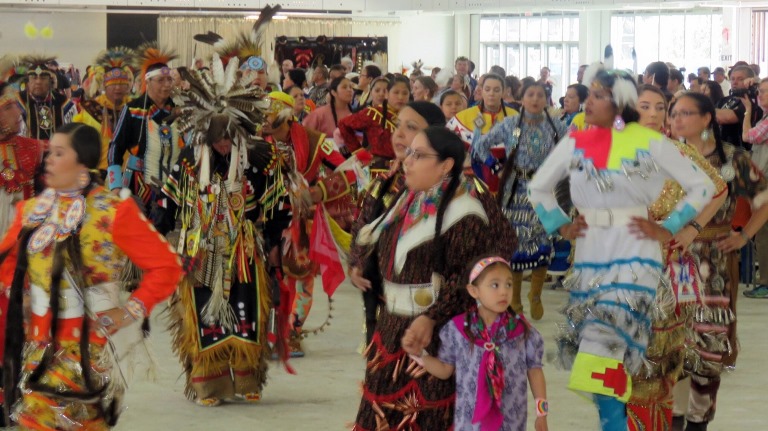 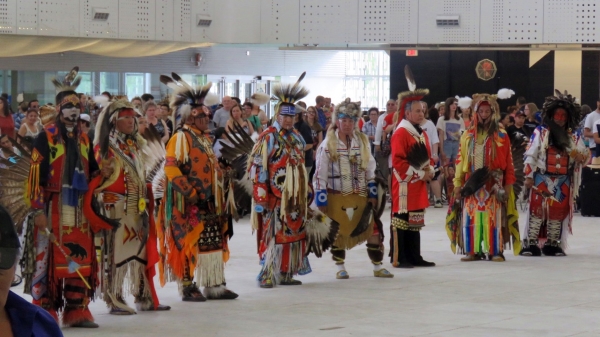 Flag and staff carriers were recognized during the  recent pow wow at Commonwealth Recreation Centre in Edmonton. 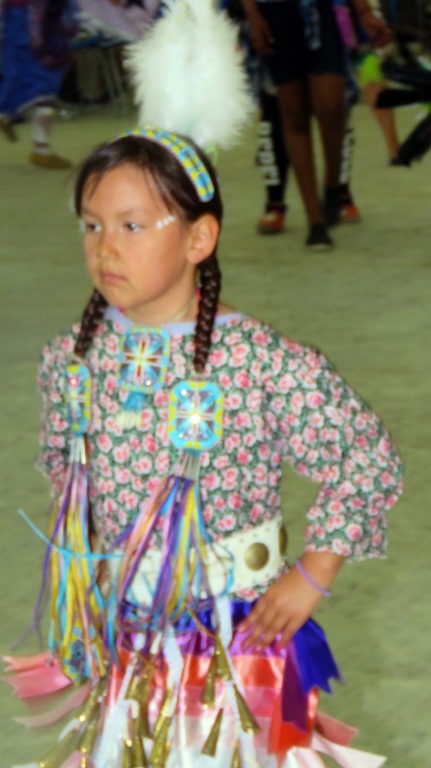 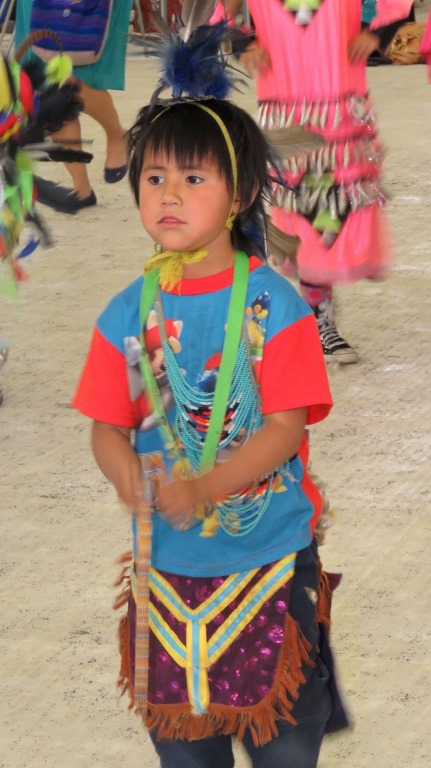 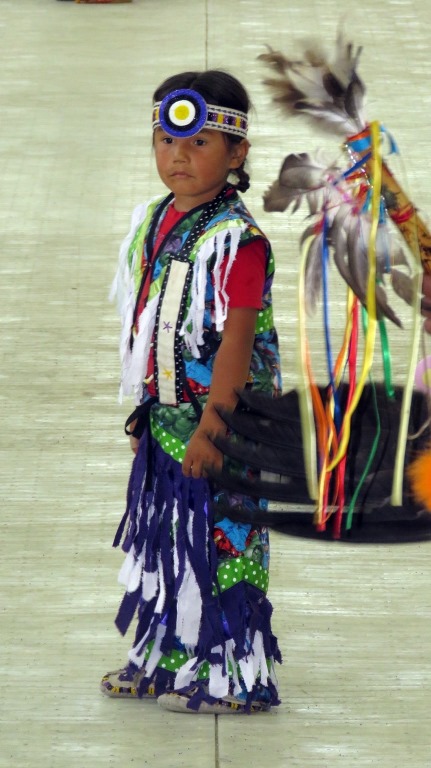 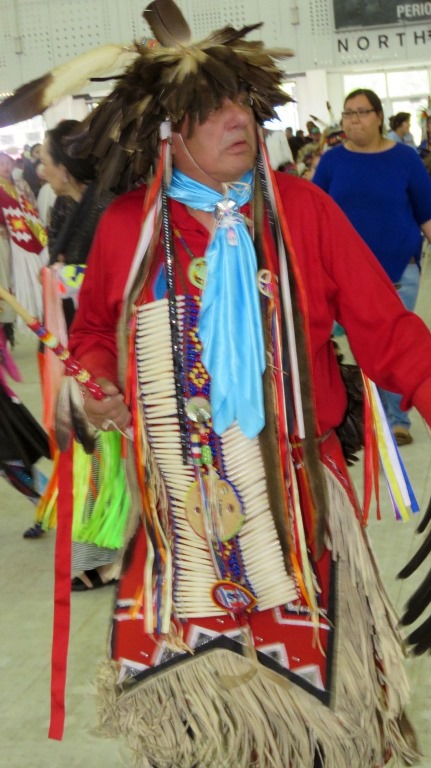 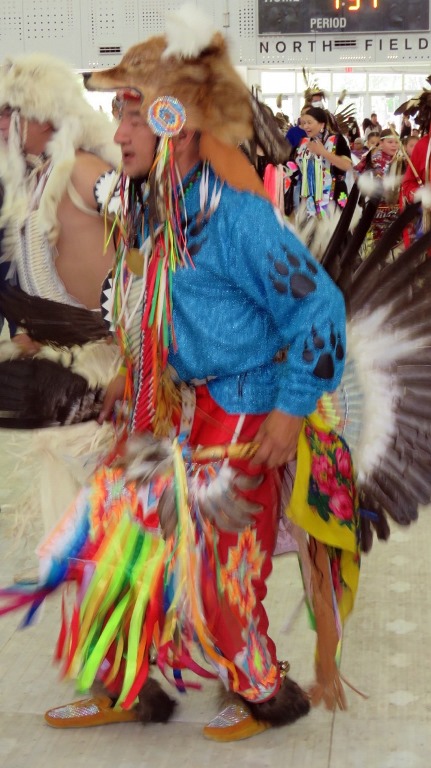 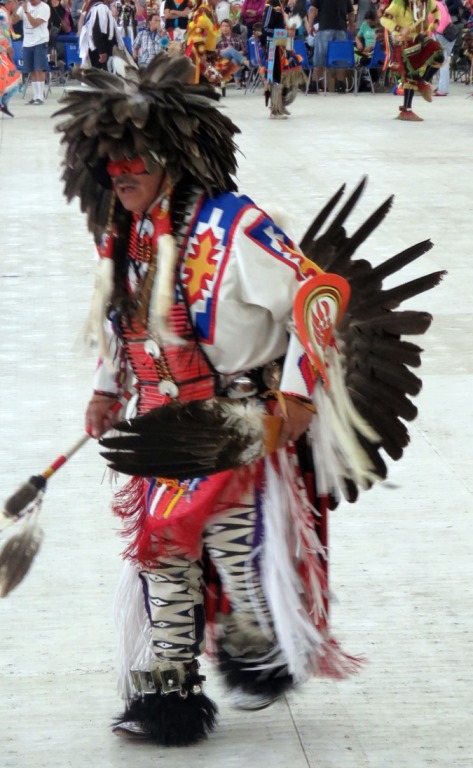 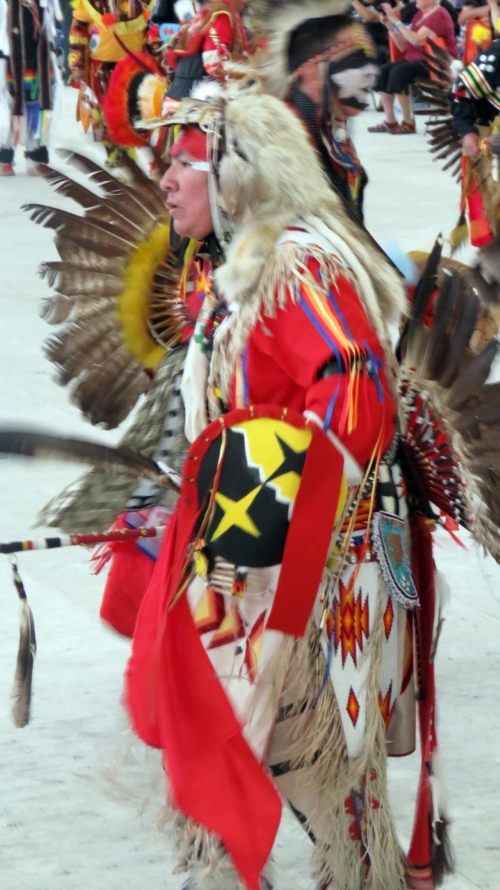 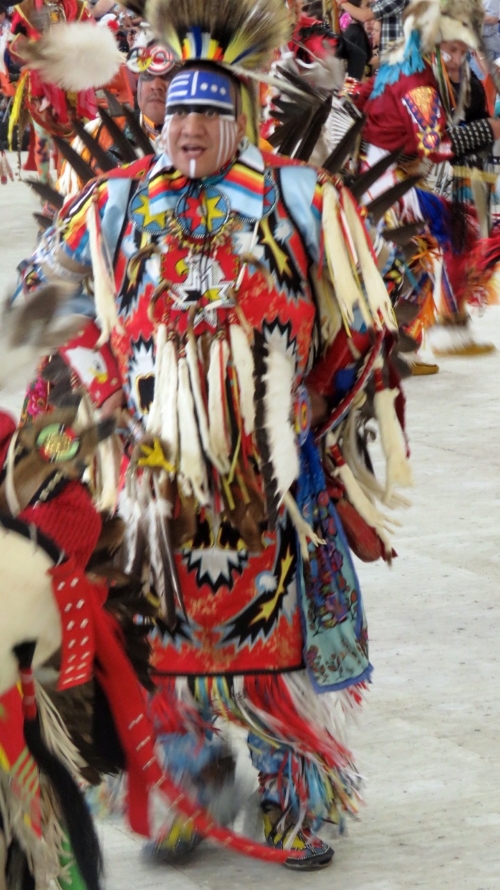 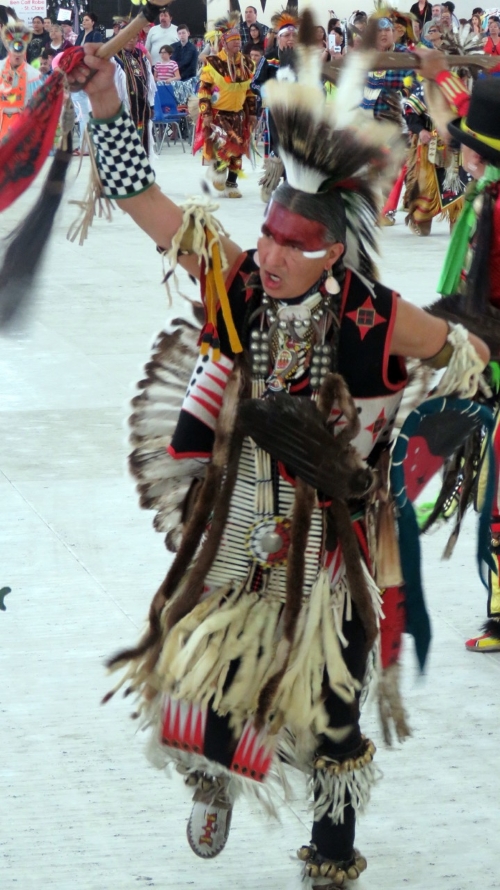