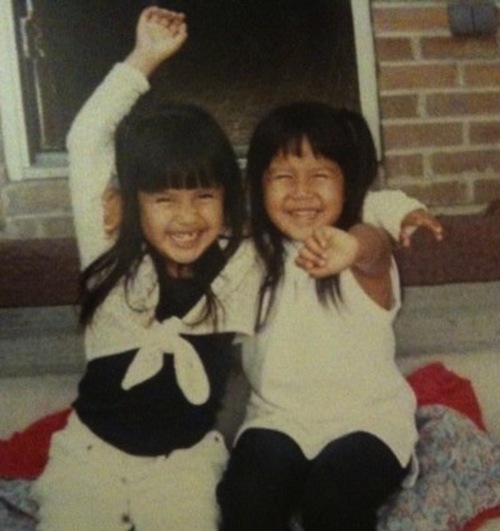 (ANNews) – If you are an artist, agent, art lover or simply a student with an assignment to write, there’s no better topic to contemplate than the ones now being presented courtesy of the Art Gallery of Alberta (AGA) in downtown Edmonton. And if you have a penchant for Indigenous art, and are maybe just a little curious about the collective works of the revered Aboriginal Group of Seven, whose colourful and intriguing masterpieces will be on display at the prestigious Capital Region gallery until the first week of July, it gets even better. Unquestionably the best known masters of Aboriginal art and art by Aboriginal artists, the work currently being showcased at the AGA represents about 80 pieces of art created in the 1970s by Alex Janvier, Daphne Odjig, Joseph Sanchez, Jackson Beardy, Eddy Cobiness, Norval Morrisseau and Carl Ray. 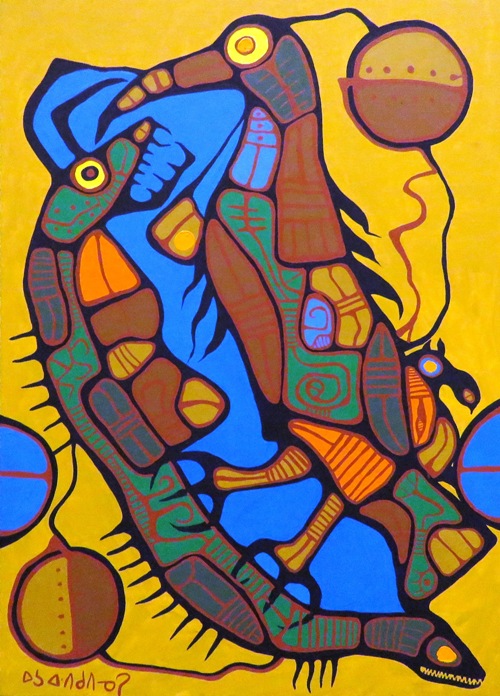 One of the stunning creations by Norval Morrisseau currently featured at the Art Gallery of Alberta as part of the acclaimed 7:PNIAI exhibit. Photo by Daniel Moser

The beautifully designed and presented exhibit, which is being curated by Regina’s MacKenzie Art Gallery Curator Michelle LaVallee, is a must-see collection of some of the most breathtaking, awe-inspiring artwork you may ever see – and though it occupies all but one room on the gallery’s main floor, it isn’t the only reason for going.

“The RBC New Works Gallery has a smaller but exciting new exhibit that I think Edmontonians will enjoy,” noted Kristy Trinier, a curator with the AGA for the past three years. “I think that people visiting the gallery during the next few months will enjoy both the contrast and the similarities these two exhibits present.”

Curated by Trinier, the New Works exhibit, Little Cree Women (Sisters, Secrets & Stories) was launched on March 5 and will remain on display until July 3. The collection represents the work of two southern Alberta women, sisters Brittney and Richelle Bear Hat.

“These two women have an exciting story to tell,” assured Trinier, “and they also have a rather unique way of presenting their work and sharing their Aboriginal culture and heritage with others. Their work is showing a whole new generation what it is like to be a Native person. The women utilize their writing skills, create text art and tell stories by combining video and imagery; their stories often come with a humorous side.”

Visitors will be treated to a unique collection of art that may not be something they’ve seen before or expect to see now. Little Cree Women (Sisters, Secrets & Stories) doesn’t present the kind of sculptures or paintings found in the gallery’s additional show rooms this month but instead you will discover an array of items and objects, each housed in its own framed collage and each representative of what is means to be Aboriginal. Hunting and gathering, forests and flowers, stripping a hide, watching the eagle soar; this collection may be smaller than some but no less significant. The frames, which vary in size, house such things as willow bark, mint leaves, photos, charred wood and other mementos of the artists’ heritage. They are items that have helped them to develop a strong identity, confident in who they are, where they come from and what they have yet to achieve. 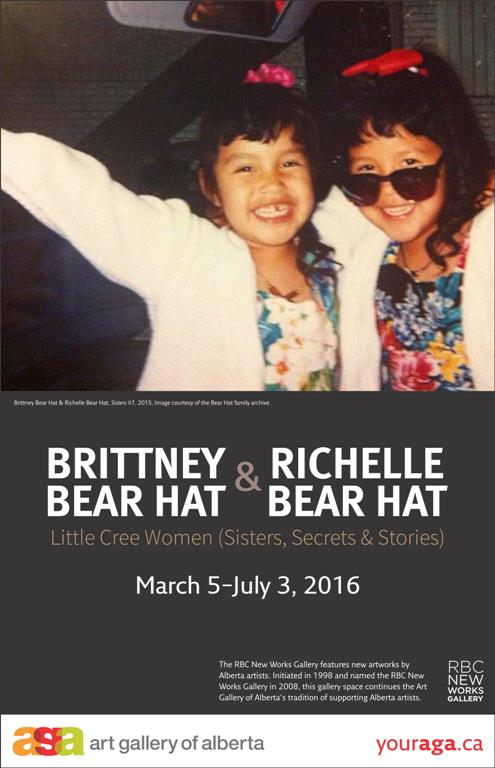 The artists’ goals are to share the confidence instilled in them from family members, who have never doubted their ability to learn about the landscape they themselves so boldly navigate.

“Both artists strive to know their culture, one that is deep with history and ever adapting,” noted Trinier. “They have learned that being Native is about more than one viewpoint and that experience can be shared as storytellers through image and text, which in turn shapes their culture.”

Richelle Bear Hat is a Calgary based First Nations artist with both Blackfoot and Cree heritage. She graduated from the Alberta College of Art and Design with a Bachelor of Fine Arts in Drawing in 2011. Her practice investigates ideas surrounding family relationships and the types of knowledge that are capable of being passed through them. These ideas are explored through the use of photography, transfers, video and paper based works.

Brittney Bear Hat is also a 2011 graduate of the Alberta College of Art and Design, where she majored in painting with an interest in collage and drawing. Based in Calgary, her work focuses on identity and belonging. Not unlike her sister Richelle, Brittney also embraces her dual ancestry in much of the work she creates in that her creations symbolize the values that identify her as Native. Her work involves the process of taking her own family photos or personal items and combining them with text, retelling stories and memories. With each piece, Bear Hat is trying to figure out what is her’s and what she can call home.

Since 2008 Brittney has participated in numerous group exhibitions and in 2011 was named the recipient of the Joane Cardinal Schubert Memorial Scholarship. In 2013 she was the resident artist at Banff Centre’s Woodland School of Art.

The catalogue that accompanies the exhibit includes an essay by Banff Centre Visual Arts Coordinator Angela Marie Schenstead. Born and raised in Saskatoon, Schenstead, an artist of Cree and mixed-European ancestry, has been an Alberta resident since 1998. Her art works have been exhibited as part of the group show Indigeneity at The Works Art & Design Festival, Edmonton (2012). Her pen on paper drawings were exhibited for Drawings, because of the land at Botega, Banff (2012).

For more information about the Little Cree Women exhibit visit the Alberta Art Gallery at youraga.ca.