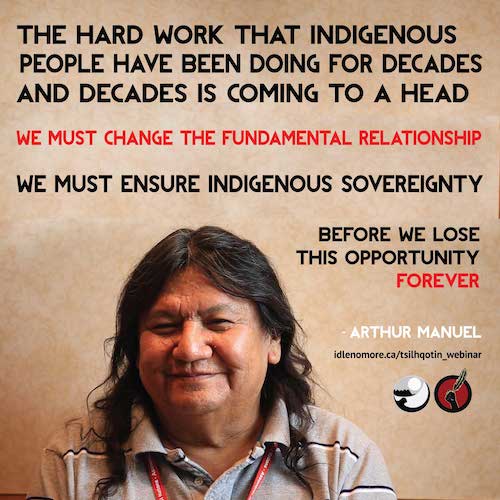 (Ottawa, Ontario)― Assembly of First Nations (AFN) National Chief Perry Bellegarde offered condolences and prayers to the friends and family of Arthur Manuel, a past Chief of the Neskonlith Indian Band in British Columbia and a leading activist and advocate for Indigenous rights, who passed away on January 11, 2017.

National Chief Bellegarde said, “On behalf of the Assembly of First Nations, I want to express our deep sadness on the passing of Arthur Manuel, one of our true Indigenous leaders. He held a keen understanding of western law and policy and was firmly grounded in his culture and Indigenous law.

“On behalf of the Chiefs in Assembly and the Regional Chiefs of our Executive, I convey our prayers and condolences to his family, friends, community and all those who knew and respected him.”

Arthur Manuel was a recognized leader, respected by First Nations in British Columbia and across the country.  Manuel served four terms as Chief of the Neskonlith Indian Band and three terms as Chair of the Shuswap Nation Tribal Council. In 2002, he co-chaired the Assembly of First Nations Delgamuukw Implementation Strategic Committee (DISC) to engage the federal government to implement the landmark Delgamuukw decision and changes to the Comprehensive Claims Policy.

Manuel played a significant role in advancing the rights of First Nations on the international stage, working at the United Nations Permanent Forum on Indigenous Issues and as a key expert and participant at the Convention on Biological Diversity. As Chairman and spokesperson for the Indigenous Network of Economies and Trade, he was a strong voice speaking to the importance of involving First Nations in all levels of economics and international trade. His writings were published in numerous publications and he authored a number of books.

In a statement, Union of British Columbia Indian Chiefs Grand Chief Stewart Phillip stated, “Members of the UBCIC are deeply and profoundly saddened to hear of the sudden and unexpected passing of Arthur Manuel. On behalf of our Elders, Leaders and Chiefs, we offer sincere sympathies and condolences to the Manuel family with respect to their tremendous loss.

“Arthur served for many years as Chief of the Neskonlith Indian Band, Chair of the Shuswap Nation Tribal Council and Leader and Spokesperson for the Interior Alliance. He was a member of the UBCIC Chief Council. Most importantly, he was a good father and wonderful grandfather who was devoted to them all, spending as much time with them as he could.

“Arthur Manuel was without question, one of Canada’s strongest and most outspoken Indigenous Leaders in the defense our Indigenous Land and Human Rights.

“He travelled extensively throughout Canada, North America and around the world in his unwavering and relentless efforts to champion the cause of our Indigenous Rights. He relentlessly worked on land claim issues, calling for change to Canada’s fundamental flawed policy on Indigenous land claims.

“At this terribly sad moment in our history, we would like to thank the Manuel family for sharing Arthur with us for all these years.

“We are so profoundly grateful for Arthur’s many sacrifices and contributions to our ongoing struggles to seek a full measure of justice for our Indigenous Peoples.

“Arthur’s legacy will continue to reverberate throughout our ongoing Indigenous history for many, many generations to come.”

Be the first to comment on "AFN, UBCIC pay tribute to Arthur Manuel and his legacy"