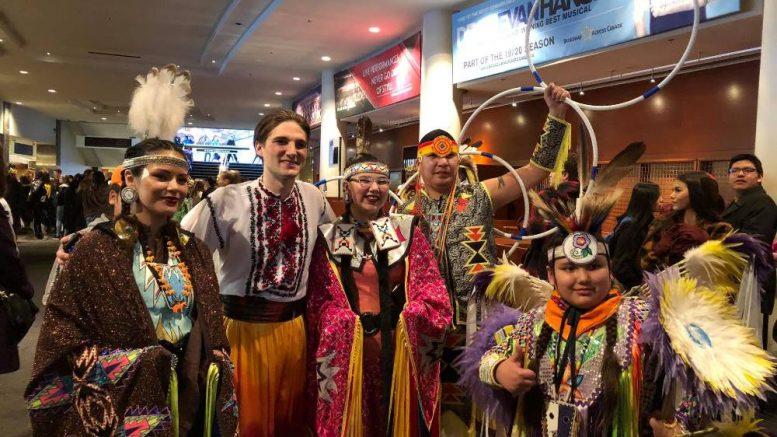 The Shumka Dancers and the Running Thunder Dancers gave the Edmonton audience a breathtaking performance on March 8 at the Northern Alberta Jubilee Auditorium. The day before, students from the Edmonton area were treated to two amazing matinee performances.

(ANNews) – In a mesmerizing spectacle of stunning magnitude, Edmonton’s Northern Jubilee Auditorium stage ignited in a captivating collision of cultures and color.  On March 8, for one night only, and back by popular demand, the Running Thunder dancers and drummers joined a cast of Ukrainian Shumka performers in a thrilling expression of history, tradition, and human celebration.  Ancestors and Elders, a two-act fusion of First Nations and Ukrainian folk lyrical expression, captures a visually stirring glimpse of what it means to connect with one’s cultural heritage.

“We must strive to become good ancestors,” declared Darka Tarnawsky, Executive Director of Ukrainian Shumka. “When we look at the legacy of the ancestors and elders who came before us, we realize this is an enormous expectation.  But with each gesture of acceptance, openness, and the simple joining of hands, it seems more and more possible.”

Ancestors and Elders brings together two unlikely cultural partners in what has proven to be a diverse exploration of how contemporary cultural groups connect with their histories, but also with their futures.

“We aim to truly and genuinely engage each other with humble and open hearts as we share our most personal stories – the ones that have seen us become who we are today,” remarked the production’s Co-Director, Barry Bilinsky.  “I hope that our piece reflects the journey we have undertaken to understand each other more deeply and begin a path to true ally ship and conciliation.”

Through movement and sound Ancestors and Elders conjures images of origin and creation, conflict and collaboration.  Ironically, juxtapositions of tradition and modern innovation, reiterated throughout the performance, highlighted the piece’s ultimate vision of harmony.

Audience members watched as stories of the enduring human spirit materialized in ensemble and solo dances.  Although First Nations contributions and Ukrainian content were easily differentiated initially, these distinctions eventually gave way to the more critical message that there is, in fact, more shared universally between peoples, than there is that divides.

The sentiments of partnership trumpeted by Tarnawsky and echoed by Bilinsky, were the foundation for all that was brought to life onstage.  The composition covered the gamut of human experience with stories of the healing powers of rain, of the search for familiar herbs and medicines in a strange land, cultural displacement, perseverance, community, and celebration.

The performance is one that engages viewers intellectually in addition to satiating their desire for entertainment.  Woven into the lyrical, rhythm-driven fabric of the production were reflective questions intended to initiate ongoing contemplation.  Audience members were encouraged by the content to ponder their own connections with heritage, understandings of history, and relationships with the cultures around them.  Ultimately, mutual acceptance, camaraderie, and respect were the desired conclusions elicited by the culmination of movement and sound as a theatre full of patrons joined hands and hearts in a shared round dance.

The procession paraded and snaked its way up and down the aisles, and across the main stage.  The montage of faces was one heralding multiculturalism and community.  The audience reflected fantastic diversity – and a shared appreciation for cultural collaboration in the arts.

The performance was, and is, accessible for all ages.  Even wiggly eight-year-old children ceased their squirming as soon as the Shumka dancers began to leap and glide weightlessly through the air to the gripping beat of the Running Thunder drummers.  While adults were confronted by content chronicling narratives from the residential school system, children were able to appreciate the enchanting cacophony of brightly colored costumes and dazzling physical feats.

While the lively dancing style of Running Thunder remained rooted poetically in the earthly, the Shumka performers seemed to defy gravity and the laws of physics – when the two groups would merge into one, the stage appeared to explode with energy.  The pairing of First Nations and Ukrainian dance seemed meant to be, as the styles worked together in a highly stimulating demonstration of pure unity.  Ancestors and Elders is more than a feast for the eyes and ears, it aims to initiate conversations about history and our collective future.

Event preview: “Ancestors and Elders” – exploring the power of tradition and truth

Running Thunder Dancers enlighten and captivate audiences of all ages