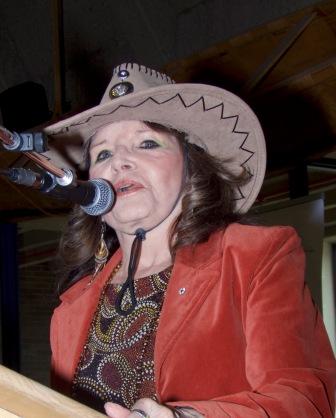 On October 25, 2017 in her first announcement as Alberta Minister of Infrastructure, MLA Sandra Jenson announced the designation of the Edmonton facility, at 12360 142 Street, as the Muriel Stanley Venne Provincial Centre during Women’s History Month.

Muriel Stanley Venne is founder of the Institute for Advancement of Aboriginal Women, an advocacy group that has defended human rights, women’s rights and the rights of Indigenous people since 1995. Under her leadership the IAAW created the Esquao Awards, a province wide recognition for Indigenous Women.

“I am so proud to make this announcement honouring Muriel Stanley Venne during Women’s History Month,” stated Jensen. “Muriel is an inspiration, a role model for women in need and she speaks on their behalf. She has made such an incredible contribution to women in this province. She has been standing up for people who need to be heard, who deserve to be heard – for decades.” 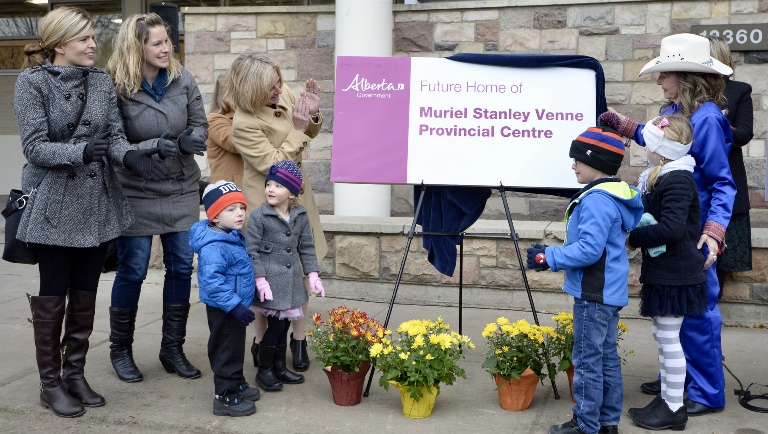 Premier Notley with Muriel Stanley Venne and her family members.

Muriel Stanley Venne has been a leader in the First Nations and Métis communities of Alberta for more than 30 years and has advanced the fair treatment of Indigenous peoples within all levels of society. Her activist path began when former Premier Peter Lougheed appointed her as one of the first seven commissioners to the Alberta Human Rights Commission in 1973. Her work has been recognized by the United Nations High Commissioner for Human Rights and she has received numerous awards for her tireless advocacy.

Also in attendance at the announcement was Alberta Premier Rachel Notley who said, “Muriel is an amazing, incredible woman who I first met through my father (former NDP leader Grant Notley) who was also inspired by this woman decades ago. She had devoted over 40 years to standing up for Indigenous Women and Girls.”

The recognition is well-earned, as Stanley Venne is a strong voice for Indigenous women and a fierce defender of human rights, added Premier Notley.

“Muriel Stanley Venne has dedicated her life to helping improve the lives of Albertans. As an Order of Canada recipient, the founder of the Institute for the Advancement of Aboriginal Women and the creator of the Esquao Awards, there is no one who deserves this honour more than Muriel.”

The Muriel Stanley Venne Provincial Centre is being retrofitted for its new function as a multipurpose government centre. Construction work, currently underway, is anticipated to be complete next spring.

“I am honoured to be the first Indigenous woman in Alberta to have my name attached to a provincial government building,” said Muriel Stanley Venne, surrounded by friends, family and well-wishers. “I hope this is a sign to young women and girls across the country that they can raise their voices and demand to be treated with respect. In the past, I didn’t feel welcomed in my community, my province or my country. That has changed today.”

Premier Notley emphasized that Muriel Stanley Venne’s efforts have been recognized by many groups and organizations. She has a long list of well deserved accomplishments and she is a role model whose work has embodied the core values shared by the government of Alberta. She said, “We are working to make sure that Indigenous people can participate fully in all aspects of Alberta life – just like the work that Muriel Staley Venne has done for decades.”

Justice will be sought for Cindy Gladue at the Supreme Court of Canada: October 11