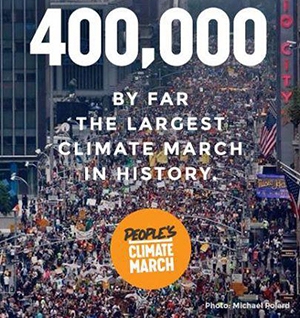 On September 21, upwards of 400,000 people gathered in New York City to take part in what is being coined the largest climate march in history. Held just two days ahead of the United Nations Summit on Climate Change, protestors aimed to send a message to world leaders to take the issue seriously.

The first ever World Conference on Indigenous Peoples was also held in New York on September 22 and 23. At the forefront of the march were Indigenous people from various nations around the globe. Also attending the event was a delegate of prominent Aboriginal environmental and Indigenous rights activists from Alberta.

Melina Laboucan-Massimo is from Northern Alberta and a member of the Lubicon Cree First Nation. She has worked for the last seven years as an advocate for Indigenous rights and in 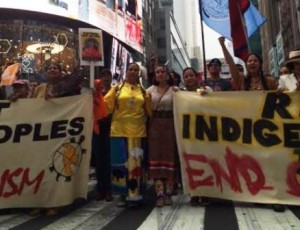 the fight against unabated tar sands extraction and expansion. In addition, she is a Climate and Energy Campaigner with Greenpeace in Alberta as well as with the Indigenous Environmental Network internationally.

“We marched to ensure world leaders hear the voices of communities whose health, safety, and livelihoods are on the line,” said Laboucan-Massimo. “It’s not morally acceptable to sacrifice communities to feed our addiction to oil. Instead, we need to see real solutions and action on climate change.”

Crystal Lameman, from Beaver Lake Cree Nation (BLCN) is a Climate and Energy Campaigner with the Sierra Club Prairie Chapter who was profoundly inspired while participating in the climate march. She believes Indigenous people are key to ushering in an era of world action on environmental issues. 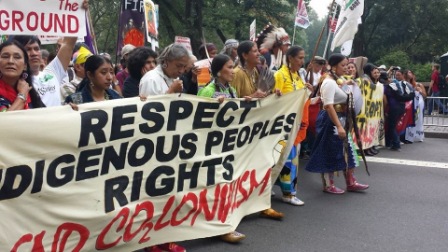 BLCN, located two and a half hours north of Edmonton near Lac La Biche is surrounded by oil extraction and other industrial activity, including mining and forestry. The development is happening within the small community’s traditional hunting and fishing lands while oil companies are proposing to expand further into the area.

BLCN has been involved in on-going litigation against the provincial and Canadian governments since 2008 citing breach of Treaty rights. Lameman said governments are not honoring the Treaties and appear to be altering legislation to cater to industry. The notion of free, prior and informed consent is a consultation merit that is not being exercised.

“Canada has a legal duty to consult and, where appropriate, accommodate Aboriginal groups when it’s determined that Treaty and Aboriginal rights could be impacted,” said Lameman. “So, that’s where we go back to the question of Canada as a nation and First Nations people as a sovereign people – Canada has made their laws and they have to abide by them.”

Given that tar sands activity is the largest emitter of greenhouse gases in the country, Lameman said governments need to immediately address the paralleling issues. And although governments equate the movement as being about the environment versus the economy, Lameman said for most Indigenous people the two are unrelated. What it comes down to is simply the protecting of the earth for future generations. 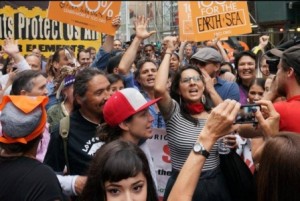 The Athabasca Chipewyan First Nation (ACFN) is another band that is all too familiar with the struggle to protect their homelands. Eriel Deranger, Dene Indigenous activist and ACFN Communications Coordinator, also attended the march alongside Chief Allan Adam and Councilor Anthony Ladouceur. In recent years the ACFN have repeatedly been in the spotlight regarding their battle against the encroaching oil sands development downstream from their community in Northern Alberta.

Deranger said it was a remarkable experience to stand in solidarity at the march with her brothers and sisters from around the world. Through the crowd of thousands she said a strong feminine energy emerged to unify participants.

“Indigenous women are rising up to take roles as leaders,” she said, and it correlates to the protection of the Earth and violence against women.

“Enough is enough, we can no longer afford to be economic hostages and we’re putting our future generations at risk if we don’t take a stand now.”

Deranger served as a liaison to some of the big name celebrities that joined the march, including environmentalist and actor Leonardo Dicaprio, actors Mark Ruffalo and Edward Norton. Last August ACFN hosted Dicaprio along with director Darren Aronofsky who travelled to the area to film an environmental documentary. Dicaprio marched alongside Chief Adam and Chief Oren Lyons of the Onondaga Nation. Two days later Dicaprio gave a moving speech at the United Nations Climate Change Summit urging world leaders to take action on the matter.

“I stand before you not as an expert but as a concerned citizen, one of the 400,000 people who marched in the streets of New York on Sunday, and the billions of others around the world who want to solve our climate crisis,” he said in his speech. 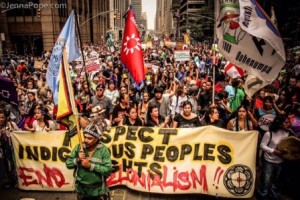 400,000 people from around the globe gathered to protest and bring awareness to the critical environmental problems that are poisoning our planet.

Another well-known First Nation environmental activist, Gitz Crazyboy, who also hails from ACFN, walked in the march and chatted with Dicaprio’s father, George Dicaprio. George said that his son’s experience in Fort Chipewyan had a profound impact on him.

“I believe that they (celebrities) know that we have a unique perspective on this, being people of the land and having a different voice,” said Crazyboy.

“Because there is something to be learned from each Indigenous nation around the planet.”

He said it was good to see people from all around the world and all walks of life banding together to create awareness about climate change. During the march he said he experienced a number of different emotions and felt empowered by the synergy it created.

“It was incredible to hear stories from people from around the world,” he said.

“To hear they have the same troubles of keeping the integrity of their cultural identity in the face of all of this industrialization.”

He believes the issues at hand are ones that need to be resolved before it’s too late.

“We can either deal with it now or we’re going to be dealt with. The world’s changing and it’s a domino effect for the environment. We are the last generation to do anything.”

Although a monumental task of mapping out solutions and moving forward lies ahead, there’s hope on the horizon. Because, as Lameman believes, the problem stretches far beyond Native territory.

“It’s a modern day movement of the rights of nature and the rights of human beings,” said Lameman. “And we are all part of something that is great and wonderful and it gives me hope as a mother who brought life into this world – that if we continue on this path of change my children will be alright.”

Prime Minister Stephen Harper did not attend the summit garnering widespread criticism from environmentalists, but sent Environment Minister Leona Aglukkaq in his place.

United Nations Secretary General Ban Ki-moon has repeatedly stated that “climate change is the defining issue of our times,” and that “now is the time for action.”

During the summit, world leaders jumped on board to contribute billions for a global climate fund to assist developing nations, set precise targets to cut greenhouse gas emissions and ensure greater use of clean energy.

However, it’s yet to be determined if participating countries will implement these commitments once the pomp and flare of the events have faded.

The 21st session of the Conference of the Parties to the United Nations Framework Convention on Climate Change is set to take place near the end of 2015 in Paris, France. World leaders are projected to join together to form conclusive agreements to address global warming.

Nevertheless the impact of the events in New York will have a lasting effect on those involved as it created a momentum that will carry them onward in fighting to protect Aboriginal rights and the environment.

“Knowing that we were at the forefront of this event was probably the most empowering feeling I’ve ever had and probably was the moment where I honestly felt like we are moving forward,” concluded Lameman.

Click here for a video that describes the enormity of the Climate Change event held last month in New York.