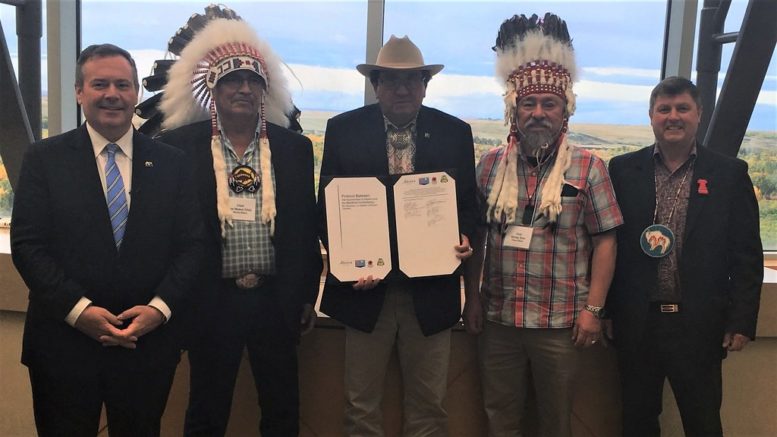 (September 23, 2019) – The Alberta government and Blackfoot Confederacy have renewed an important relationship agreement that will have both parties working closely.

“Our government is focused on building a true partnership with Indigenous Peoples through shared prosperity,” stated Alberta Premier Jason Kenney.  “This agreement will formalize how we build success together. I look forward to meeting with the chiefs each year to discuss our progress.”

The Alberta-Blackfoot Confederacy Protocol Agreement – originally signed in 2017 – sets out a formal process for ministers, chiefs and councils to meet regularly on pre-agreed topics:

“This protocol agreement is a broad umbrella under which we can have meaningful discussions, share information and explore issues of mutual concern,” added Minister of Indigenous Relations Rick Wilson. “Good things can happen when we work together.”

The Blackfoot Confederacy includes three First Nations in southern Alberta: the Blood Tribe (also known as the Kainai First Nation), Piikani Nation and Siksika Nation. Together, these First Nations have more than 22,000 members.

Alberta is providing a $200,000 grant to the Blackfoot Confederacy to support the agreement’s implementation. The agreement will remain in place for as long as both parties wish to keep it active.

COVID-19 Testing Available for All Albertans

Class Action commenced against Gov. of Alberta for Coerced Sterilization of Indigenous Women