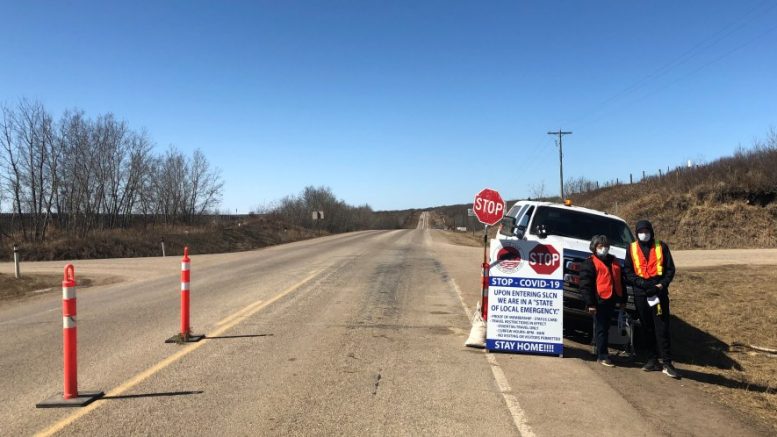 (April 23, 2020) – “May I ask where you’re coming from? Have you traveled to any infected areas within the past ten days? Are you showing any flu-like symptoms–cough, cold, fever? Are you a Saddle Lake resident?” If you’re planning on entering Saddle Lake or are just merely passing through, prepare to be stopped and asked these questions.

Saddle Lake Cree Nation, located 180 kms northeast of Edmonton, is entering its fourth week of emergency security measures as the COVID-19 pandemic continues to sweep across Canada (and the world). The security project has been made in response to the growing number of confirmed cases within the province. According to the Alberta government, as of April 23, there have been 3720 confirmed cases within the province and 68 deaths.

If you are unlucky enough to have flu-like symptoms, a high temperature, or if you have come from a place of infection then a ten-day self-isolation period will be enacted. A doctor will test for the virus during a home visit and then constant monitoring will follow.

The operation is run entirely by Saddle Lake band members from the administration to those running the check stops. Transportation has been donated by local businesses; gravel and barricades are provided by the Nation’s departments; the Health Centre has supported the project through lunches and safety equipment such as masks and gloves; Georgina Cardinal and Penny Delver have supplied hand-made, Pendleton face masks. Saddle Lake has truly come together to fight the spread of the virus.

The singular confirmed case in Alberta on a First Nation was confirmed in Sucker Creek on April 22, located about 23 kms east of High Prairie. The Alberta Chief Medical Officer declared the sickness contained and isolated; not an outbreak.

“We are doing our best to try and keep this COVID-19 out of our community,” HR Representative, Lena Cardinal, said in an interview, “and so far, so good.”

I travelled to a few of these check stops to ask those fighting the virus on the frontlines a few questions, here they are below:

How’s it going at this checkpoint?

A: At this checkpoint here, it’s actually pretty slow. But the other checkpoints, like 652 east, are pretty busy. Yesterday we had about 300 vehicles go by. Today, in these four hours, we had maybe ten.

Have you found any difficulties when working these check stops?

A: There’s nothing really hard about this job at all–as long as you know how to talk to people and y’know, ask questions, be thorough–it’s pretty good.

And how are the people who come through here?

A: There are some people that are a little mouthy sometimes, but its fine.

How are the non-community members who come through here?

A: They’re very appreciative and they always tell us we’re doing a good job here in our community.

So these check stops are useful?

A: Yeah, I would say so because we are slowing down the number of vehicles [passing through]. When I first started there were a lot of vehicles and now I’m noticing there’s less traffic. People are also becoming more understanding and appreciative.

And you both feel safe working here? You have the proper equipment and what not?

A: For sure–feel safe one-hundred percent of the time.

Any difficulties working these check stops?

A: Probably when people are being rugged, when they don’t comply, but other than that it’s not too bad–pretty straight forward.

Okay. I went down to the south-side checkpoint and they said you guys had 300 vehicles yesterday?

A: Yes. And we checked them all.

How about the community member reactions?

And the non-community members?

A: They’re pretty nice. They’re positive about it. They respect our rules.

And you would consider these check points useful?

And you both feel safe when you’re working here?

Most of the time?

A: Yeah, sometimes you get some pretty gangster-looking people coming through. A little sketchy. But they’re usually compliant, too.

They probably don’t want to get searched. But health and safety-wise, you guys are good?

Are there any difficulties within the job?

A: Having people comply. Like, I know it’s hard seeing some stranger asking you your temperature, but—I don’t know. Also, people [the community and non-community members] are getting used to the change.

And has it gotten better?

A: A little bit of both, but mostly non-community members.

Would you consider these check stops useful?

A: They are. I’ve had a few incidences where I had to turn people around because they’re non-residents. We’re trying to minimize the risk, right? And being that there are no cases, in and around Lakeland, it is working.

The statistics don’t lie, eh? Final question for you: do you feel safe working at these check stops?

A: I would say so. Equipment-wise, we use masks and what not. These masks are really good. We could use a little bit more reflective tape on our pylons. But other than it’s been a good ride.

1 Comment on "Saddle Lake: Fighting the Spread of COVID-19"