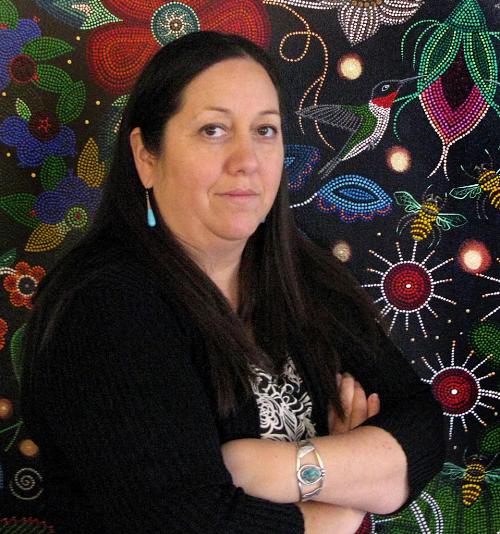 (ANNews) – In the fall of 2013 Canadian artist Christi Belcourt was in Edmonton working alongside renowned Elders Marie Campbell, Pauline Paulson, and Peter (Alo) White. They were participating in the first-ever presentation of the Walking With Our Sisters (WWOS) project, a remarkable undertaking that created a massive community-based commemorative and memorial to honour the nearly 1200 Indigenous women and girls who’ve been murdered or have gone missing during the last three decades.

Created in partnership with the Native Health Sexual Health Network and the Helen Betty Osborne Memorial Foundation, the Walking With Our Sisters initiative put out a call to “every caring soul” in the community interested in contributing a pair of moccasin tops (vamps/uppers) to the project. The project started in May 2012 and by the time the closing date (June 2103) for submissions had arrived more than 1725 pairs of vamps had been contributed to the project. The result was the creation of a massive commemorative that would embark on a seven year Canadian (including several American cities) tour that will come to a close in the summer of 2019. 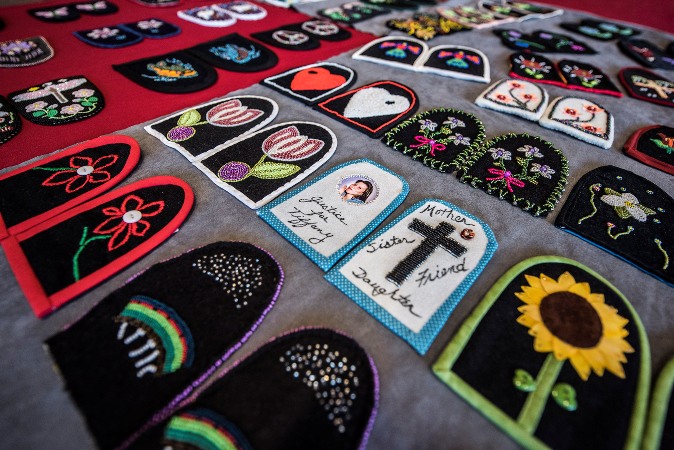 Walking With Our Sisters is a massive commemorative art installation that honours and acknowledges the missing and murdered Indigenous women of Canada and the US. The very moving project will continue its tour across North America until 2019. Christi Belcourt has been lead coordinator since its inception in 2012.

“The project is still underway and will be for the next few years,” noted Belcourt in a recent interview. “Ceremonies are held at each stop along the way for the purpose of honouring the women’s lives and acknowledging what the families are going through. The response has been overwhelming since the beginning and it just keeps going.”

More vamps have been added over the last couple of years, bringing the total to more than 1810 pairs of moccasin tops and an additional 118 pairs of children’s vamps.

Belcourt, the lead coordinator of the initiative, noted that “the work exists as a floor installation made up of beaded vamps arranged in a winding path formation on fabric; the project also includes arrangements of cedar boughs.”

No pictures are permitted and viewers are asked to remove their shoes before they walk on the path of cloth that runs alongside the collection of vamps. 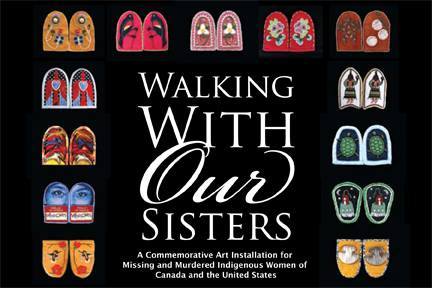 “Each pair of vamps represents one missing or murdered Indigenous woman,” explained Belcourt. “The unfinished moccasins represent the unfinished lives of the women whose lives were cut short. The children’s vamps are dedicated to children who never returned home from residential schools. Together the installation represents all these women; paying respect to their lives and their existence on this earth.”

The Walking With Our Sisters website notes that “in addition to the moccasin tops, 60 songs were submitted for the audio portion of the exhibit. One of the most heartwarming and unexpected aspects that developed over the course of the years were the dozens of beading groups that formed. Women, men and children, both Native and non-Native, gathered in living rooms, universities, community halls and penitentiaries across North America to bead, sew, quill, weave, paint, embroider, and create mixed media pairs of moccasin tops out of the love, care and concern they have for missing or murdered women and their families.” 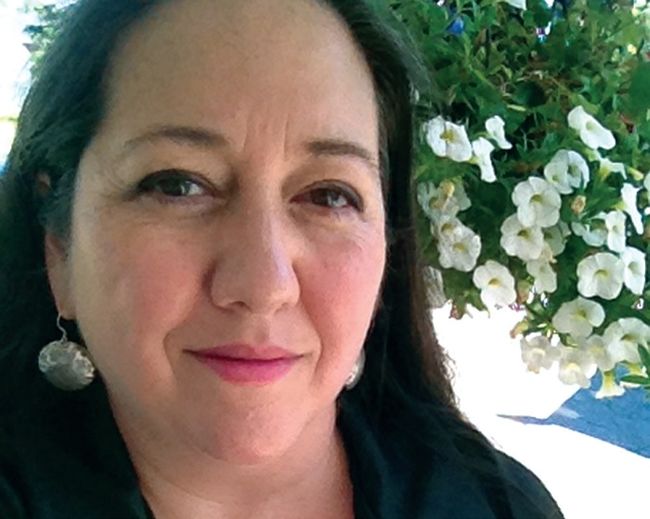 Christi Belcourt is an artist. author and activist whose ancestry originates from the Métis historic community of Lac Ste. Anne, Alberta. She is the eldest daughter of well known and respected Métis politician Tony Belcourt, a co-founder and the first (1970) President of the Native Council of Canada, which later became the Congress of Aboriginal Peoples (CAP). An artistically talented family, Christi’s brother Shane is a well known filmmaker while her younger sister, Suzanne is an emerging visual artist and a graphic designer by trade.

During our recent interview the conversation turned to other issues of importance to Christi, beyond the WWOS.

“One of the things that concerns me today is what we are creating for tomorrow,” she said.

“The biggest and most important thing we have to do now is ensure that our youth have a tomorrow to look forward to. There are other issues, of course, that include Métis governance, nuclear energy, the environment, pipelines, safe drinking water, housing and much more; but as Indigenous peoples we need to step up and ensure that our youth are able to compete and thrive for another millennia.”

That, she said, begins by getting back to the land, back to the traditional ways, back to a time when everyone in the community had a job to do and an obligation to meet.

“I’d also like to see Aboriginal organizations, the federal and provincial governments, the corporate sector and Canadians in general push hard to ensure that the 94 recommendations set down by the Truth and Reconciliation Commission are dealt with, expediently and without prejudice.

“One of the keys to eliminating the marginalization and stereotyping we face as Indigenous peoples is to begin telling the truth – and that truth begins in the history books that Canadian children study throughout their years in a classroom. Changing the way the school system operates is more than challenging, it’s a very tedious and slow process that needs to find a way to expedite what we already know – the books are wrong and they need to be rewritten. 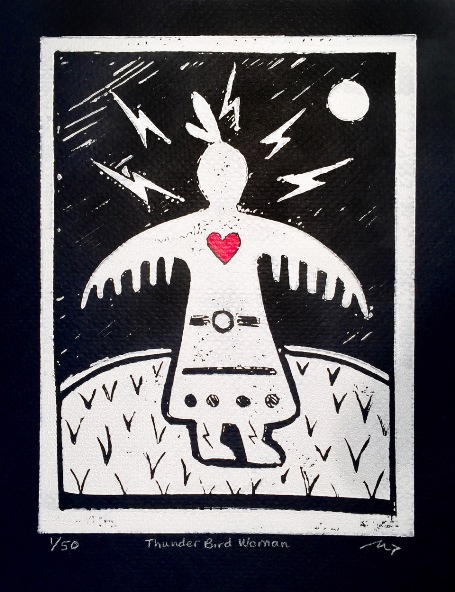 “Thunderbird Woman” by Isaac Murdoch, is part of the Onaman Collective, an initiative created by Murdoch, Belcourt and Erin Konsmo.

“As Indigenous people we are [becoming more] educated in that we have [an increasing number of] lawyers, politicians, sports personalities, dentists, doctors, and other professionals. What we don’t have any more are people being raised on a trapline; what we don’t have any more are youth whose first language is their own. We have to ask ourselves: where are we going and what are things going to look like 100 years down the road if we stay on the path we now find ourselves. Culture, tradition and ceremony – that’s what we are about; it is who we are. We are one with the plants and the wildlife and the natural evolution of nature yet we find ourselves forced to settle with bottled water, third party control of our communities, and corporations that care more about a dollar today than they do about the earth and our environment in one hundred years’ time. It doesn’t matter whether we are talking about green technology, corporate responsibility, Indigenous rights or simply getting back to the land, we need to have the input and the wisdom of our Elders just as we have always had. Without them we are a lost people; in the past each of us had a job to do, a responsibility to fulfill but much of that has gone by the wayside.”

The residential schools, the quiet and less publicized continuation of the ’60’s Scoop, the unwillingness by non-Aboriginal entities to place foster children and children-at-risk with Aboriginal families and caregivers are all part of the ongoing and continuing saga that delivers statistics and information every Canadian should want to eliminate, statistics that include 70 percent unemployment in Aboriginal communities, serious gaps in education, a flawed justice system that puts Aboriginal people behind bars because they can’t pay a $100 fine, increased cases of domestic violence, rising numbers of Aboriginal youth committing suicide, a serious and ongoing shortage of affordable housing.…and the list goes on.

“I am confident that given the opportunity it will be our youth who lead us into a better tomorrow,” explained Belcourt.

“Young people are our best hope and they are worried about the future and about the environment. We don’t yet have the power to change things, but our youth are technologically aware; they are keen to participate and they have the insight it will take to move forward. Our youth will be the difference makers; we just need to ensure that they have the opportunities they need to succeed – a good education, equal opportunity and guidance from the Elders. We need to help them reconnect with the land, with nature, with themselves.”

The Onaman Collective, an initiative developed and managed by Christi Belcourt, Isaac Murdoch and Erin Konsmo, is being utilized to help enhance today’s youth so that they in turn can help resurrect the past. All three artists are “dedicating their work and lives for social change and justice for Indigenous Peoples.”

“Our goal,” explained Belcourt, “is to preserve and recover traditional knowledge, develop traditional art skills and create new ways for traditional teachings in the arts to carry on within the next generations. But we also have a love for contemporary arts and experimentation.

“We live our culture. We don’t believe Indigenous Peoples’ art has ever been stagnant, but rather has always pushed boundaries, adapted and shifted, and been on the cutting edge of expression within each generation.” 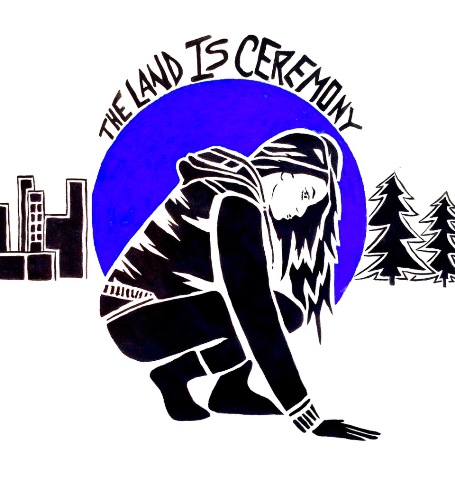 The above stencil print by Erin Konsmo, entitled “The Land is Ceremony” is part of the Onaman Collective, an intiative created by Konsmo, Christi Belcourt and Isaac Murdoch to connect youth to land, traditional knowledge, language and Elders through art and land-based activities.

The trio chose the name of the initiative “because we, like the parallels between Onaman as a binding or clotting agent used in traditional medicine for wounds, as well as within traditional paint and how the three of us will combine our skills for art and land-based community learning, collaborations and community based gatherings that centre on art, land and ceremony as a way to transfer knowledge of traditional teachings and language.”

“For thousands of years,” notes Murdoch in the opening notes on the Onaman Collective, “the Anishinabek have been using a Red Ochre paint called Onaman. It is made from red ochre, animal or fish fat, and other ingredients such as urine and duck or seagull eggs. These are cooked together on a low heat. The longer you cook the paint the redder it becomes. In the language the word “Onaman” refers to the action of thickening something. There are many types of Onaman, most of them use types of Fungi, and each of them become thickening agents, particularly in the clotting of blood in wounds.”

One of the Onaman Collective initiatives was the creation (July/August 2015) of a Chippewa canoe-building project, an undertaking designed “to plant new seeds for the regrowth of cultural practices that were once lost or suppressed.” 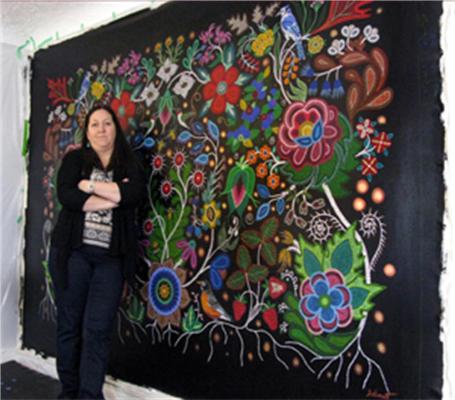 Christi Belcourt with one of her stunning creations.

Christi Belcourt, an incredibly gifted and talented artist, is the recipient of awards from the Canada Council for the Arts, the Ontario Arts Council, the Chalmers Family Fund and the Métis Nation of Ontario. Her work can be found within the public collections of the National Gallery of Canada, the Gabriel Dumont Institute, Indian and Inuit Art Collection, the Canadian Museum of Civilization, the Thunder Bay Art Gallery and the Museum of Nature. She was the feature artist in the January 2016 edition of Alberta Native News.

For more information about any and all of the above, and much more, visit  ChristiBelcourt.com. Click here to view the stunning cover art by Christi Belcourt which graces the January 2016 edition of Alberta Native News.

Activist Christi Belcourt urges: Counteract the chaos by standing up for what’s right