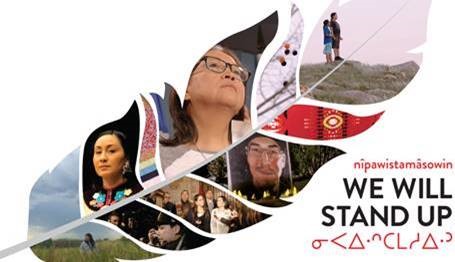 Montreal – (NFB) – Winner of the Best Canadian Feature Documentary Award at Hot Docs, Tasha Hubbard’s acclaimed nîpawistamâsowin: We Will Stand Up (Downstream Documentary Productions/National Film Board of Canada in association with CBC DOCS and APTN) begins a national theatrical tour on May 23 in Saskatchewan. Distributed by the NFB, the film will open in Saskatoon, followed by theatrical dates in Regina, Vancouver, Toronto, Edmonton, Winnipeg and Sudbury—with more cities to be announced soon—as this powerful portrait of a family fighting for a more just and fair society comes to communities across Canada.

On August 9, 2016, a young Cree man named Colten Boushie died from a gunshot to the back of his head after entering Gerald Stanley’s rural property with his friends. The jury’s subsequent acquittal of Stanley captured international attention, raising questions about racism embedded within Canada’s legal system and propelling Colten’s family to national and international stages in their pursuit of justice. From the acclaimed director of Two Worlds Colliding and Birth of a Family, this sensitively directed film weaves a profound narrative encompassing Hubbard’s own adoption, the stark history of colonialism on the Prairies, and a vision of a future where Indigenous children can live safely on their homelands.

Hailed in the Toronto Star as “one of the most consequential films ever to open Hot Docs” (Peter Howell) and “a documentary everyone in this country should see” (Tanya Talaga), nîpawistamâsowin: We Will Stand Up made history as the festival’s first-ever opening night film by an Indigenous filmmaker. The film will also have its BC premiere on May 8 and 9 at the DOXA Documentary Film Festival in Vancouver.

nîpawistamâsowin: We Will Stand Up is a co-production of Downstream Documentary Productions and the NFB, produced in association with CBC DOCS and APTN with the participation of the Canada Media Fund, the Feature Film Production Grant Program of Creative Saskatchewan, Telefilm Canada and the Rogers Group of Funds through the Theatrical Documentary Program, with the assistance of the Hot Docs Ted Rogers Fund and is distributed by the NFB.

nîpawistamâsowin: We Will Stand Up is produced by Tasha Hubbard and George Hupka for Downstream Documentary Productions, and Jon Montes and Bonnie Thompson for the NFB. The executive producers are David Christensen (NFB), Janice Dawe and Kathy Avrich-Johnson (Bizable Media).

The NFB is Canada’s public producer of award-winning creative documentaries, auteur animation, interactive stories and participatory experiences. NFB producers are embedded in communities across the country, from St. John’s to Vancouver, working with talented creators on innovative and socially relevant projects. The NFB is a leader in gender equity in film and digital media production, and is working to strengthen Indigenous-led production, guided by the recommendations of Canada’s Truth and Reconciliation Commission. NFB productions have won over 7,000 awards, including 24 Canadian Screen Awards, 21 Webbys, 12 Oscars and more than 100 Genies. To access NFB works, visit NFB.ca or download its apps for mobile devices.