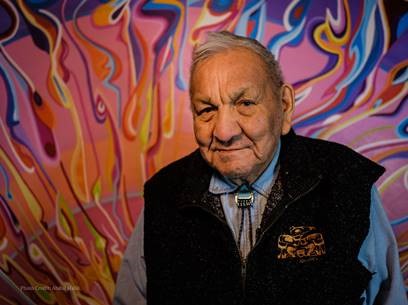 Calgary, AB – Alberta University of the Arts (AUArts) will bestow an Honorary Master of Fine Arts to world-renowned artist and alum Alex Janvier (CM, AOE, RCA, LLD) at its first convocation since its transition from Alberta College of Art and Design..

Alex Janvier, Denesuline, from the Cold Lake First Nations, Treaty 6 Territory, has been a professional artist for several decades. Janvier is renowned for his distinct curved lines and use of bright colour combinations.

His unique abstract style and his artistic ideas have blazed the trail for many First Nations and Canadian Artists. He received a Fine Arts Diploma with Honors in 1960 back when AUArts was Alberta College of Art and was the institution’s first Indigenous graduate.

In 2012, the Art Gallery of Alberta hosted a major exhibition of 90 paintings of his work, including very large canvas originals and works shown to the public for the first time. One of his highest achievements was his solo travelling exhibition Alex Janvier: Modern Indigenous Master curated by the National Gallery of Canada from 2016 to 2018. The exhibition was well received and even made a stop at the Glenbow Museum in Calgary, Alberta from June until September 2019.

Notable public commissions include “Tsa Tsa Ke K’e” or “Iron Foot Place” at Rogers Place in Edmonton, Alberta, and the diptych, site specific installation of “Sunrise” and “Sunset” at the Legislative Assembly of Alberta installed in March of this year.

Even at 84 years of age, Janvier has no intention of slowing down. “The best art I did, was the ones I didn’t get to yet,” he said when asked about his work. “I’ll get to it.”

“I cannot think of anyone more deserving than Alex Janvier of such recognition,” said Dr. Daniel Doz, AUArts President and CEO. “His extensive work-although strongly based on his Indigenous roots, magnificently transcends cultures, times and locations, as the poetic language he has developed over the years speaks to everyone’s heart and spirit. He makes all of us at Alberta University of the Arts so proud to count him as one of ours.”

This is the first convocation since AUArts officially became a University in February 2019. The event will occur at 1 p.m. on Thursday, May 16, 2019 at the Southern Alberta
Jubilee Auditorium.