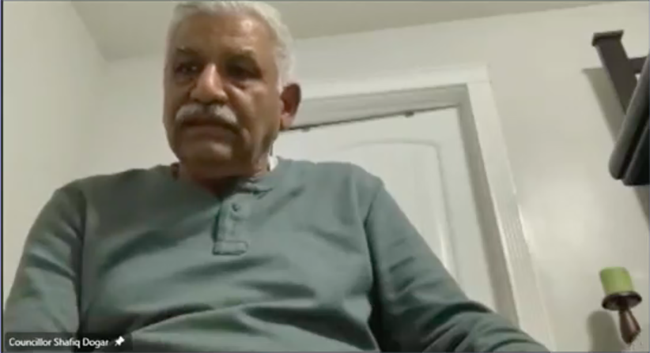 (ANNews) – A Regional Municipality of Wood Buffalo councillor is refusing calls for him to step down after making remarks about Indigenous peoples during budget deliberations. He is alleging that he has been misinterpreted.

Coun. Shafiq Dogar insinuated that Indigenous residents of the region had a proclivity towards drinking and getting into fights at a Feb. 3 meeting, following a request for funding preventative measures for missing and murdered Indigenous women and girls by fellow Coun. Kendrick Cardinal, who represents Fort Chipeywan and Fort McKay.

At the meeting, Dogar denied there was a “campaign against the Indigenous people.”

“These people are in the rural areas and whenever there’s any drunk people in the town, I am a taxi driver and I can feel it after a few yards, few hundred yards, he would find some place where he would get some respite or something, for some relief and a taxi driver might get ahold of them,” he said.

“In your rural areas… some people drunk and maybe it is a criminal case. Also fighting, beating somebody, he’s unconscious, people can’t leave them immediately.”

An initial statement from Mayor Sandy Bowman had misquoted Dogar as saying, “Indigenous people reside in the rural areas and only come to Fort McMurray to get drunk, or fight, or have other legal issues.”

Bowman maintains he should resign given the “hurt, pain and sadness in the community” his remarks caused.

Whatever his precise words, critics say Dogar was engaging in harmful stereotypes of Indigenous peoples.

“I could not believe that someone would be that disrespectful, thinking that you could say those words and not figure there’s going to be any kind of action against it,” CEO of the McMurray Métis Bill Loutitt told Global News.

“We are not only shocked but appalled by these statements meant to stereotype and degrade Indigenous peoples,” reads a statement from Athabasca Chipewyan’s chief and council.

“We are particularly deeply hurt given our Nation’s recent tragic loss of an Indigenous woman, and the addition of her name to a long string of missing and murdered Indigenous women in our region.”

“Wood Buffalo’s Council Chambers is a place for reconciliation, not harmful statements and division,” she said.

Speaking on behalf of the municipality in a statement, CAO Jamie Doyle apologized for “these hateful and insensitive actions” that occurred in council chambers.

“The comments made only undermine the professional and ethical reputation of the department and the overall organization. These comments are disrespectful, undignified and racist. This behaviour is not aligned with the Council Code of Conduct, or values that we uphold as an organization,” Doyle said.

“Our quality of life, ‘Well, that’s just another Indian. That’s just whatever.’ We’re not at the same status as the new Canadians. We’re still at the bottom of the barrel. It’s not surprising because I don’t feel we’re valued as Canadian citizens,” said Bourque.

Be the first to comment on "Wood Buffalo councillor refuses to resign, denies remarks were anti-Indigenous"