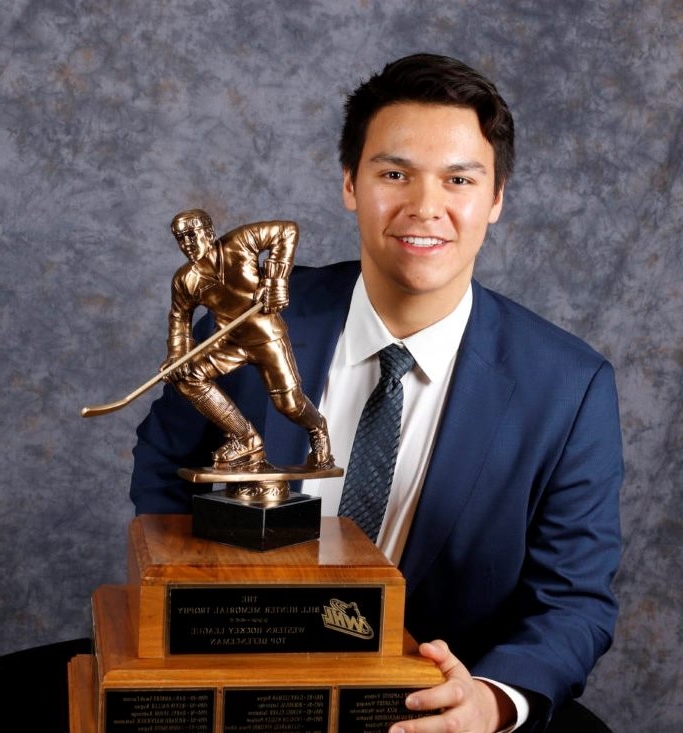 (ANNews) – On May 3, 2017, the Western Hockey League announced the names of the league’s best overall position players, coaches, rookies and more. Among those chosen was Seattle Thunderbirds defenceman, Ethan Bear, a member of Saskatchewan’s Ochapowace Nation and one of six Saskatchewan-born players on the Thunderbird’s roster.

“It was quite an honour for me,” said the rising 19-year-old hockey star in an interview a few hours before his team would hit the ice to play the visiting Regina Pats in the tie-breaking Game 5 of the 2017 conference showdown. “There’s a lot of ups and downs being a hockey player and at times it can be quite tough, but when you put your nose to the grindstone and work hard to achieve your goals and then get rewarded for it, it’s a pretty nice feeling.”

On Sunday, May 14, the Seattle Thunderbirds went on to beat the Regina Pats in six games and for the first time in their storied history, won the WHL Championship and took home the Ed Chynoweth Cup. The next step is a trip to Ontario where the team will participate in the competition that will determine who goes to the 2017 Memorial Cup. The round robin play gets underway May 19; the Seattle Thunderbirds play their first game on May 20th against Conner McDavid’s former OHL team, the Erie Otters.

“Ethan has a lot of skill and he’s probably got the best slap shot in the league,” noted Public and Media Relations Director, Ian Henry. He’s also a right-handed player and that’s hard to find in a good defenceman, even in the NHL today most shoot left.

And that could bode well during the next year or two for the Edmonton Oilers, whose defencemen are currently all left-handed shooters. The team selected Bear during the fifth round (124 overall) in the 2015 NHL Draft and signed him to a three-year entry level contract on July 2, 2016.

“He’s a hard, 5’11” player who thinks fast, moves quick and recovers rebounds as well as anyone,” added Henry. “He’s definitely got what it takes to make the NHL and will go to the Oilers training camp later this year. He may not play for the big club in the upcoming season, but his skills continue to improve and it won’t be long before he’s ready.”

Bear still has one year of junior eligibility remaining, but the Oiler contract could see him join their AHL affiliate, the Bakersfield Condors, later this fall.

Ethan Bear isn’t thinking that far ahead; during our interview he was preparing for the next game and a possible trip to compete for the Memorial Cup. He did note, however, that he was looking forward to playing the next couple of games in Regina.

“I have quite a few family members and friends and it’s always good to have some support in the other guy’s rink,” he noted, saying he expected that good crowds would continue in Regina.

In fact, just a week later and with three straight wins under their belt, the team came away with a 4-3 overtime win and when they looked up the only fans left in Regina’s Brandt Centre were Thunderbirds fans.

After the final game Bear told the Leader-Post that “seeing the crowd we had, it felt like home ice; without them I don’t think we could have done it. It’s amazing to look at all my family and all my friends. I’m not the only guy from Saskatchewan, so I bet they all feel the same. We knew it wasn’t going to be easy right from the get-go. Every time they were down in a series they came back and won. We knew that. We just stuck to it. It feels amazing.”

It is interesting to note that no Saskatchewan club has won the league title since the Swift Current Broncos did it in 1993.

When speaking about his home community, Bear said he enjoys working with and spending time with the youth at Ochapowace. The entire community supports him and “are always there cheering me on.”

Bear encourages the younger members of his community to “stay in school and finish your education. You can’t do anything these days unless you have a high school diploma. Education comes first – when you have it then you find something you really like to do and stick with it. Work hard and make every effort to stay on the path to success. Life might not be easy but when you have an education and a worthy goal, it feels great when you achieve it.”

For more Bear stats and information check out the seattlethunderbirds.com website.

Ethan Bear stands up against barrage of racist messages: “I’m proud of where I come from”