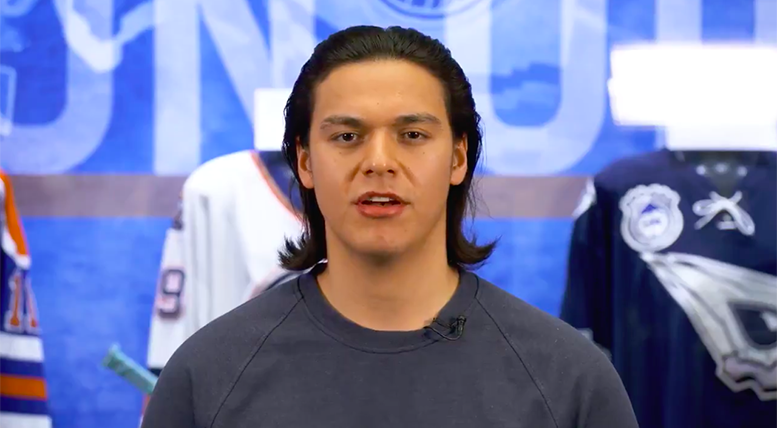 Ethan Bear speaks out against racism following the Oilers loss to the Winnipeg Jets. (Screenshot image).

(ANNews) – Earlier this week the Edmonton Oilers completed their run in the 2021 NHL playoffs with a defeat to the Winnipeg Jets.

However despite the hockey team’s loss, the most newsworthy thing about the entire affair was the racism against Indigenous player, Ethan Bear, that occurred afterwards.

In their final game against the Jets — and thus the season — a number of Bear’s on-ice errors resulted in goals against the Oilers. The Oilers lost the game in triple overtime.

One day after the game, Bear’s girlfriend, Lenasia Ned, announced that the Indigenous defence man had been receiving racist messages and comments from disgruntled Oilers fans who blamed the entirety of the loss on Bear.

Ned’s announcement spurred an entire news day worth of content and sparked outrage among First Nations and Canadians alike. Many social media posts were made in defense of Ethan Bear and many Indigenous organizations released statements.

The Confederacy of Treaty Six First Nations Grand Chief, Vernon Watchmaker said, “Our First Nations people are avid fans of hockey and the Edmonton Oilers, and we are most proud of the athletic achievements of our people. Ethan has been a gracious ambassador to our youth, and he is very much a part of our communities.”

“We all have a responsibility to speak out against racism in any circumstance and to ask those involved to stop.”

The Federation of Sovereign Indigenous Nations (FSIN) also released a statement regarding the racist comments. “The blatantly racist comments being posted on social media this week are disgusting and these individuals must take the responsibility for the harm they are causing the sport and the First Nations community,” said FSIN Vice Chief Heather Bear.

“My Nephew is a strong man and a positive role model to so many of our people, but it hurts our community and our First Nations youth who read and see these comments online. No one deserves this disgusting backlash, and we are calling on the Oilers, the NHL and everyone to stand up to these racist people and do something about it.”

“Staying silent when racism is so public like this is unacceptable,” said Vice Chief Bear.

Shortly after, the Oilers’ General Manager and President of Hockey Operations, Ken Holland, said that the comments towards Bear are “totally unacceptable. It’s disgusting. Ethan is an unbelievable young man. He’s a tremendous role model for all young athletes, especially in the Indigenous community.”

The NHL as an organization also supported the Indigenous Hockey Star, “Ethan Bear represents both our game and his Indigenous heritage with dignity and pride. He, and all people from Indigenous backgrounds, deserve to feel empowered and respected on and off the ice. We stand with Ethan and his family in denouncing hate.”

Bear released a video statement in response to the situation. “We just came off a hard fought series. We didn’t get the result we wanted, but the guys left it all on the line,” said Bear. “As you know, I’ve been subject to racist behaviour on social media. I know this doesn’t represent all Oilers fans or hockey fans and I greatly appreciate your love and support during this time.”

“I’m here to stand up to this behaviour. To these comments. I’m proud of where I come from. I’m proud to be from Ochapowace First Nation.”

He concluded his statement by saying, “I call on all of us to help make change and to end racism. We all deserve to be treated fairly, and in the end I think we’ll get there.”

WHL star Ethan Bear has a great future in hockey

1 Comment on "Ethan Bear stands up against barrage of racist messages: “I’m proud of where I come from”"