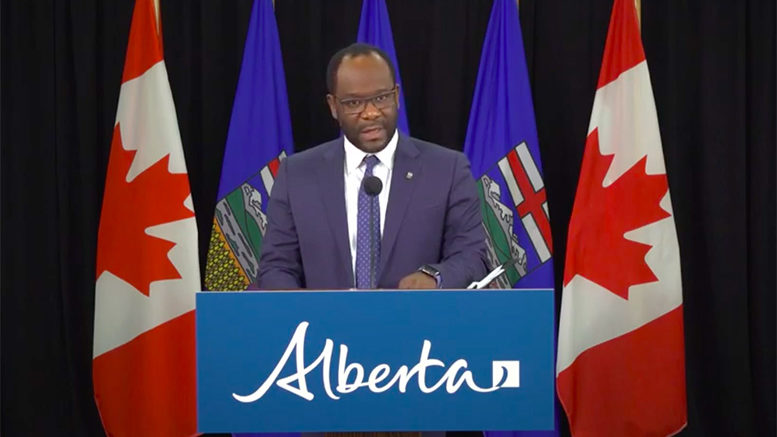 (ANNews) – On January 17, 2022 the Province of Alberta and the Kenney government were hit with yet another controversy. As covered through numerous news outlets and opinion pieces, Minister of Justice Kaycee Madu was put on the defensive when facts were released outlining a call he placed to Edmonton Police Service (EPS) Chief Dale McFee. The placing of the call in question took place following a March 2021 incident in which Minister Madu was cited for distracted driving.

In his official release on the issue, Minister Madu stated that his phone was placed in the inside pocket of his jacket, and that he was not distracted driving. He also clarified that the call to Chief McFee was not in regards to having the ticket revoked, but rather an innocent inquiry into whether he was being surveilled by the EPS or racially profiled. In any event, Madu quietly paid the ticket, by his own admission, by the end of that week.

But, understandably, questions are still abound as to why the issue was shuffled under the rug for the better part of nine months, and why the Minister of Justice did little to investigate the issue. The events become increasingly dumbfounding when one considers that Minister Madu was called to the Bar in Alberta in 2014 as part of the Tisel Law Firm before the election. One could infer it would be more than reasonable to question the validity of the ticket, especially if one is a trained legal professional.

Further to that, if the phone was inside his jacket and not being held, then as outlined in s.115.1(2) An individual may drive or operate a vehicle on a highway while using a cellular telephone or radio communication device in hands-free mode. Accordingly, it would be clear that there was no violation and the Minister would be well within his rights to seek invalidation of the fine. The fact that none of this occurred raises even more doubt and uncertainty around what took place that morning in March.

Additionally, the injection of allegations of racial profiling or surveillance seem to fall flat on their face as well. On March 30, 2021, the Community Safety and Well-Being Task Force (CSWB), assembled by Edmonton City Council, released their Safer for All report which placed a magnifying glass on the actions of EPS and how they over-police Black, Indigenous and People of Colour (BIPOC) communities. Strengthened by EPS data and best practices from across North America, the report pushed for systemic change following the tragic death of George Floyd in 2020. This report included recommendations to avoid racial profiling and called on the EPS to act differently when engaged in community policing.

With yet another opportunity to call attention to his perceived targeting, Minister Madu remained relatively silent on the Safer for All report. Now, there may be reason for Madu to question whether he was being surveilled or targeted given inflammatory statements regarding the state of policing in Lethbridge and the province as a whole. We know that the world of policing is relatively small, and as indicated in the prominence of Thin Blue Line patches, it operates very much like a brotherhood. But in the end, the actions, or lack thereof, speak volumes into what took place that March 2021 morning, and whether it was worth pressing.

In any event, like many within the province, we will await the outcome of the special investigation into the call, its content and whether it was an abuse of authority. And much like Minister Madu, we will wait to see whether he will remain on hiatus from serving as the first Black Justice Minister in Alberta history, or whether the Premier and caucus will be forced to undergo another shuffle.

Be the first to comment on "What happened to Kaycee Madu – Racial Profiling or Red Herring?"