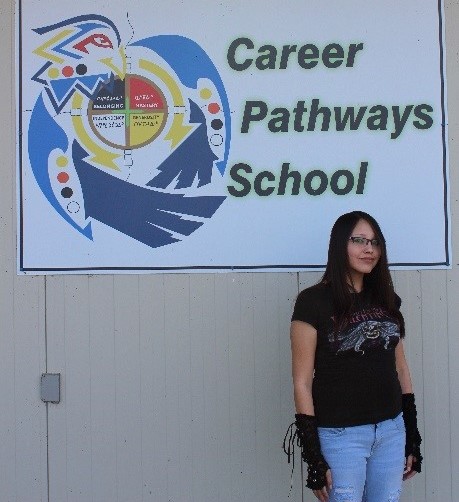 (May, 2016) – Northland School Division No.61 (NSD) recently announced that Wabasca-Desmarais student Chantelle Manybears has been nominated for the Indigenous Shining Student Award. This annual award is presented to a student of First Nations, Métis or Inuit heritage, who demonstrates leadership and inspires others, through embracing and respecting Aboriginal perspectives. Chantelle, a grade 12 student from Career Pathways School, was nominated by one of her teachers Angela James.

“When I first met Chantelle, she was quiet, shy and withdrawn,” said James. Within the first year at Career Pathways School, Chantelle utilized her artistic skills and immersed her rich Indigenous cultures of both Woodland Cree and Blackfoot into the school logo design. She continues to be a leader and role model by sharing her Indigenous knowledge on various topics and issues we discuss within the school.

Chantelle’s willingness to talk about her heritage goes beyond sharing. She says embracing her worldview helps her to understand people’s perspectives on aboriginal culture.

“The reason I’m so intrigued by knowing other people’s perspectives is because I learn what my place is on the world stage,” said Manybears. “I share this knowledge at my school by encouraging people to share their worldviews by talking about it. My hope for people at my school is for them to know their culture by continuing their education and to learn about Aboriginal history. I truly believe that’s the way to bridge two worldviews and be blended respectfully.”

In addition to leading by example at the school, Chantelle demonstrates role model qualities outside of school by volunteering for the Bigstone Cree Nation Fire Department. Despite the busy schedule, Chantelle says it doesn’t get in the way of pursuing her dreams.

“My dream is to become a botanist (plant scientist) or something similar to that,” said Manybears. “Art is a part of my life, so it’d be nice to go to school for that also. But whatever happens, I just mainly want to be happy.”

When asked about being nominated for the Indigenous Shining Student Award, Chantelle says it’s an honour just to be considered for the award and appreciates the support from everyone.

“I feel like my principal, and teachers really helped me tons,” said Manybears. “They make my education experience pleasant and enjoyable. When I wake up for school, I don’t dread it. Sure, there are days when I don’t feel the greatest. But I’m still comfortable going to school because I know I’m welcomed, supported, and wanted there. So thank you to everyone who supported and never gave up on me. You guys helped me sprout and enabled me to grow.”

A school in Anzac piloting a land-based learning course