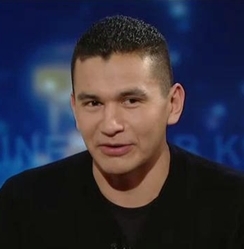 A young man from Winnipeg is garnering national attention with his efforts to improve the lives of Aboriginal people in Canada. And recently there has been speculation that he might throw his hat into the ring for the Assembly of First Nations leadership contest which will be held later this year. His name is Wab Kinew and he is Director of Indigenous Inclusion at the University of Winnipeg.

Kinew – an Anishinaabe, CBC TV Journalist, activist, and also an award winning hip-hop artist – is moving and shaking up the perception of our nation’s First Peoples. Earlier this year, he successfully championed author Joseph Boyden’s The Orenda in Canada Reads and just last month it was announced that the thirty-two year old Kinew has signed a two-book publishing deal with Penguin’s Viking imprint for release in fall 2015.  Already an accomplished journalist, pundit and motivational speaker and with 26,500 followers for his Twitter feed of aboriginal affirmation, there is no doubt that he is destined for success in life.

The first book, due out in fall 2015, is a memoir “about family reconciliation and spiritual rebirth,” according to a statement from Penguin Canada. An illustrated children’s title will follow.

Penguin Canada president and publisher Nicole Winstanley, who acquired the books, says it was Kinew’s Canada Reads appearance that first caught her attention. “I was moved and inspired alongside many Canadians. Wab’s powerful voice should be heard by all, and this memoir offers unique insight into how he came to find it,” she says. 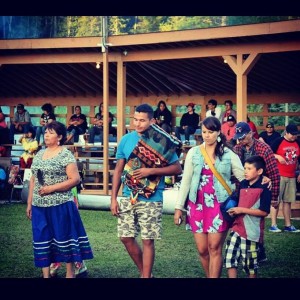 Wab Kinew was honoured in his home community this summer by Chief Kathy Kishiqueb at the Onigaming Powwow.    Article by Brandi Morin

“I’ve been lucky to travel the country and see political and economic reconciliation in action,” says Kinew in the statement. “However, I was also given the gift of helping my late father, who experienced the worst of the residential school era, on his very powerful journey to foster spiritual reconciliation. Through sharing our story, I believe we can contribute to the conversations happening between Canadians and Indigenous people – but also to share some lessons on what it means to be a good human being.”

Wab Kinew’s family has always been actively involved in leadership and his father Peter Kinew, was Grand Chief of Ontario for many years. Wab feels he is living out his life mission, stemming from direction he received from a vision at a very young age.

“I had a vision when I was three or four years old,” said Kinew. “I saw an eagle that took me on a journey.”

Upon learning of the powerful vision his father took him to see a medicine man who instructed him to have a pipe and return to see him by the next moon. His calling to a powerful destiny that would impact the lives of many was confirmed and his family started grooming him for his life purpose. He was also trained in traditional medicine and taught the language and culture of his people.

“I’m a spiritual man and I have a deep faith,” explained Kinew. “I couldn’t say I chose this path, I would say it was something that chose me.”

In his teenage years Kinew developed a deep love for traditional drum and hip-hop music and he began to express himself through rapping. For many years he traveled Canada sharing inspiring messages through his songs and won an Aboriginal Peoples Choice Award and an Aboriginal Music Award.

With a drive to succeed he earned a Bachelor of Economics from the University of Manitoba, but coinciding with his passion for music he began working in radio, which eventually lead him to the CBC and to a career in broadcasting.

Being passionate about sharing the plight of Aboriginal people an opportunity came about a few years ago for him to participate in and host a ground breaking documentary series, titled 8th Fire.

8th Fire draws from an Anishinaabe prophecy that declares now is the time for Aboriginal peoples and the settler community to come together and build the ‘8th Fire’ of justice and harmony. Kinew committed to the project and as production commenced he was unaware that the series would produce overwhelming success and stimulate important conversations.

“Honestly, I wasn’t sure what was going to happen, I was also a little skeptical,” he explained. I thought ‘okay I’m going to do my best on this project and there’s a pretty good team here’, but I wasn’t totally sure that a documentary series produced by the CBC was going to resonate with the Aboriginal community or non-Native people. On one hand it needs to be authentic enough for Native people to feel like it’s doing a good job of portraying them. On the other hand it needs to be open enough to appeal to non-Native Canadians. I wasn’t sure how well it was going to go until I saw the first episode come together. Then I really became a believer.”

Debuting in January 2012, 8th Fire quickly struck a chord with viewers across the country and gained a regular, loyal following throughout its four-week run.

“It’s been interesting,” noted Kinew. “When it was on TV tons of the comments I received were from Native people but in the time since it’s been mainly non-Native people.”

Although the series is now off the air, coverage is continuing to be added on the 8th Fire website and word is spreading far and beyond. Kinew has heard stories of people on both sides expressing interest in hearing the issues faced by Aboriginals, wanting to know the true history of Canada and instilling a desire to learn more about the culture after viewing the series.

“I think we presented certain stories to the public that are important to be talked about and to be heard and I think that a lot of  people saw something on the show that appealed to them or touched them in some way and they felt compelled to talk to somebody near them about it. The conversation is what really matters.”
An advocate for reconciliation between Aboriginal and non-Aboriginal Canadians, Kinew believes it’s the right time for reconciliation, but there are things that need to happen on both sides in order for it to happen.
“Non-Native people need to come at things with an open mind and really discard all the presuppositions that they bring to the table. It’s really hard to do because a lot of things are really ingrained in Canada regarding the views towards Aboriginal people. It doesn’t happen easily, but I’ve seen a lot of people with open minds so that’s encouraging. I think Aboriginal people need to demand more of ourselves and hold to a higher standard when it comes to different areas in our communities. We have it within ourselves to do better and we should ask of ourselves that we deliver on that potential.”
Kinew believes that culture and identity is extremely important to keep alive since the effects of residential schools and colonialism where designed to strip the “Indian” way of life away.

He is working to revive and strengthen this aspect and facilitates Anishinaabe, one language classes in Winnipeg and online through social media outlets like YouTube, Twitter and Face book. He takes the traditional teaching approach incorporating fun games, crafts, songs and elements of culture to create a hands on environment for children to learn alongside their parents and also elders.

“Our language is on life support. The reason why it’s at risk of dying is because the heart of the language, the thing that transmits it from one generation to the next doesn’t exist anymore. People don’t learn it organically in their homes. So if our community is like a patient on life support, what we’re trying to do in the classroom is give it a pace maker or heart transplant. The real magic is the kids are now starting to soak it up from the older people.”

Besides his hectic schedule and flourishing career, Kinew is also a committed father of two young boys. He has spent time coaching his eldest son’s hockey team and regularly speaks Ojibwa at home plus teaches his sons the medicine way of life.

He also believes in the importance of sobriety and how it’s incompatible to the Sundance and traditional medicine lifestyle.

“I don’t really preach, but I don’t see how you can live up to your full potential if you’re wasting your time drinking or being hung over. It’s pretty simple.”

Kinew is now widely regarded as a Canadian celebrity, role model and public figure and we’ll be watching him closely in the political arena.   The full 8th Fire series and extended interviews can be viewed at http://www.cbc.ca/8thfire/. Click here to listen to Wab Kinew’s spoken word defence on Canada Reads.

This article was written by Brandi Morin in 2012 with updates from the Alberta Native News staff writers.

Be the first to comment on "Wab Kinew: A man with a vision"