VANCOUVER, BC/ Troy Media/ – The B.C. government cannot expect support from First Nations for its much-touted liquefied natural gas (LNG) projects if the province insists on steamrolling ahead with the Site C dam, a First Nations chief is warning.

“They want support on LNG, and the level of destruction that is going to bring, and then they want Site C as well. They can’t have them both,” Chief Roland Willson of West Moberly First Nation said. 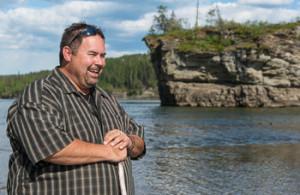 There is no logical reason to have both, Willson added, saying the provincial government has ignored alternatives to Site C, even as the federal Joint Review Panel found there is no immediate need for the power and excess power would be sold at a loss.

Treaty 8 First Nations in B.C. are vehemently opposed to BC Hydro’s plans to build a third massive dam on the Peace River that would flood more than 5,000 hectares of land, swamp more than 330 recorded archaeological sites and – in direct contravention of the 1899 treaty – destroy land now used for hunting, fishing and collecting medicinal plants.

Initially, some Treaty 8 Tribal Association nations were willing to look at what the B.C. government was offering in terms of mitigation and compensation, but as more information became available Willson noted a change in attitude.

“Now everyone is opposed,” he said.

The treaty states First Nations have the right to continue with their way of life “for as long as the sun shines, the grass grows and the rivers flow.”

But with massive resource development in the area, the sun, grass and rivers are all at risk and Site C is the final straw, Willson said.

With high levels of methylmercury in fish because of rotting vegetation from the previous two dams, fishing is restricted and ungulates, such as caribou, are being destroyed by the major projects, said Treaty 8 Tribal Association Chief Liz Logan, who has asked the UN Special Rapporteur James Anaya to call on the government of British Columbia to assess cumulative impacts of industrial activity in the area.

A recent study, Passages from the Peace (PDF), by the David Suzuki Foundation and Global Forest Watch Canada found 28,587 kilometres of pipelines, 45,293 kilometres of roads and 116,725 kilometres of seismic lines used for oil and gas exploration within the Peace region. 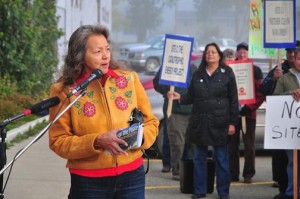 “We have become the cash register for the province . . . . Now our way of life is going to be interfered with again,” Logan said.

“We are bush people and this is our grocery store, our pharmacy, our school and our church. It still sustains us.”

The treaty is alive, despite damage inflicted on the ecosystem by resource extraction and previous Peace River dams, so the province should think carefully about ramifications of treaty-breaking, Willson said.

The Joint Review Panel agreed the dam will have significant adverse effects on First Nations practices and heritage and that many of those effects cannot be mitigated.

A total of 21 First Nations would be affected if the valley is flooded and, with numerous legal decisions reasserting First Nations’ constitutional rights, there is growing awareness that a court challenge could hold up the $7.9 billion project for years if the province decides this fall to proceed.

The two Treaty 8 First Nations rely on the Peace Athabasca Delta for plant gathering, fishing, hunting and travel through the many lakes and river tributaries and presented evidence at the hearings that showed the Delta is already ecologically stressed, with low water levels affecting wildlife habitat and harvesting.

Any further changes to water levels in the Delta could prevent First Nations from exercising their treaty rights, according to the application, which aims to have some sections of the Joint Review Panel report declared invalid and unlawful, some sections quashed and others referred back to the panel for further consideration.

The application is asking the Federal Court to prohibit the federal and provincial governments from taking any further actions that would allow Site C to proceed until a new report is issued that complies with “principles of procedural fairness.”

BC Hydro spokesman Dave Conway said he could not speculate about the possibility of Site C heading to court.

“However, I can tell you that we aim to fulfill our duty to consult and, where appropriate, accommodate aboriginal groups,” he said.

Logan said the five Treaty 8 nations have not yet voted on whether to go to court, but there are heavy hints that any attempt to build the dam will immediately become entangled in legal battles.

“The only mandate I have right now is to oppose this right to the end. We are going to go back to our people once we hear the decision,” Logan said.

Willson supports the judicial review of the environmental assessment and then, if necessary, a court challenge.

But going to court is expensive, especially when going up against the deep pockets of BC Hydro and the provincial government, he said.

BC Hydro has talked with more than 50 aboriginal groups in hundreds of meetings since 2007 and will continue to look for mitigation measures, Conway said.

“We are committed to providing lasting benefits to aboriginal groups through the construction and operation of the project. In addition, we are negotiating impact benefit agreements with some First Nations where appropriate,” he said.

But a major hurdle is the distrust First Nations have for government.

“Nothing the B.C. government has done since I have been chief has made me trust that I can believe anything they do,” Willson said.

Logan said she always tries to be hopeful.

“But, unfortunately, in my 16 years of working with this government, I have learned not to really trust what comes out of their mouth,” she said.

As decision time approaches, other Site C opponents are counting on the power of First Nations.

There is no doubt Treaty 8 nations have a strong case for stopping the dam plans, said Andrea Morison, coordinator of the Peace Valley Environment Association.

“That bodes very well for the campaign and I absolutely expect it would go to court,” Morison said.

However, in the meantime, Peace Valley residents and First Nations are hoping Site C will be rejected and there will be no need for a legal battle.

That will take more pressure from people in southern B.C., Logan said.

“We are doing everything we can, along with our environmental friends from down south, to create awareness and tell people ‘it’s coming out of your pocket,’ ” she said.

Emma Gilchrist is deputy editor of DeSmog Canada. The column is courtesy of troymedia.com