It seems like human kind has always been fascinated by explosions in the sky. My ancestors up the James Bay coast have always had a deep respect for the power of nature.

My Elders passed down a legend to me about lightning or Oh-mee-nee-s-koh as originating from the west. We Cree on the James Bay coast live on flat tundra and mushkeg. We consider any rise in the land as a mountain.

The stories that were passed down about Oh-mee-nee-s-koh described it as a living being that lived in a world onto its own in the sky. He or she wandered the sky and passed over our heads from time to time in the clouds that formed in the storms during the summer. He or she also originated from the high mountains of the west. 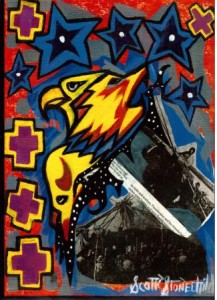 This year my July 1st was full of explosions in the sky. I was invited by my friends John and Colleen to watch a fire works display in Alymer, Ontario. The evening was festive with live music and all kinds of  entertainment mainly for children. It was hot and sultry as we sat on the top of a large hill overlooking the fireworks launch pad. It was magical to watch the sun disappear in hues of red and purple over the surrounding  lush forests and farmland.

When darkness fell on us and the stars popped into the sky to join a crescent moon, we knew the fireworks would soon begin. Suddenly, there was a loud burst and great flowers of flame shot up into the sky. These flowers and brilliant balls of light dazzled the audience with an entire spectrum of colours. The explosive sounds were almost deafening and echoed or ricocheted off the town behind us. The darkened sky lit up constantly with dramatic brush strokes of light that streaked and screamed across the night sky. There were ‘oohs’ and ‘aahs’ from the crowd with every blast of fireworks into the heavens. It all climaxed in a crescendo of brilliant, colourful rockets that turned the dark sky into a kaleidoscope of shapes.

On the way home, as I drove along in the dark, I noticed a huge storm front brewing in a lightening lit sky. The lightening pulsated from one side of the land all the way to the other. The sky over my head was full of stars yet the horizon was lit in huge lightening bolts that displayed the powerful anvil head clouds in the distant sky.

As I drove on, it occurred to me that Oh-mee-nee-s-koh had come to visit me in the south and was running wildly on the tops of the clouds. It helped me remember all of those Elders that had talked about the power of

lightening and fire. Decades ago when my people were very close to the land a huge thunderstorm, presided over by Oh-mee-nee-s-koh, often meant a refreshing break from the black flies and mosquitoes. It also brought rain to replenish the forests and tempered the heat of a summer day.

The explosions from the storm in the sky and the man made fireworks of my July1st also reminded me of human kind’s fascination with big fire. As part of our evolution, I think we have gone down a bad track in developing weapons of mass destruction having to do with explosions in the sky. I am reminded of that fascinating book by Farley Moat called ‘And No Birds Sang’, where he talked about his time in World War Two and living with daily bombings and explosions that tore his friends apart in front of his eyes. It reminded me of the atomic bombs that we dropped on Hiroshima and Nagasaki during that same war. The destruction that our fascination with big fire produces has developed to the point where our very existence on this planet is threatened.

It bothers me greatly that we have lost our respect for Oh-mee-nee-s-koh. We have enough nuclear weapons on this planet to destroy it many times over and some how we have allowed ourselves to be governed by leaders that are constantly waging war. Perhaps we should remind them that our existence here is fragile enough without the real danger of nuclear conflict. These fireworks would be fatal.

Be the first to comment on "UNDER THE NORTHERN SKY: Explosions in the Sky"