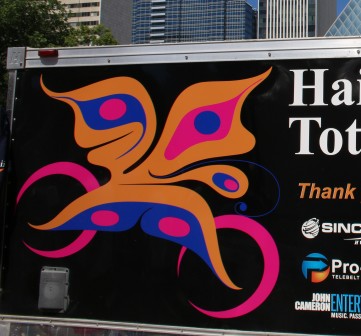 Reaching out to help children in need is a never-ending cycle and Canada Day in downtown Edmonton drove home this point. Thirty-eight cyclists zipped into Churchill Square following a 1760 km odyssey that began off the mainland coast of British Columbia in traditional Haida territory. The region, just west of Prince Rupert, was once called the Queen Charlotte Islands, but in 2010 it was officially renamed its traditional name Haida Gwaii as part of a reconciliation protocol between British Columbia and the Haida people. 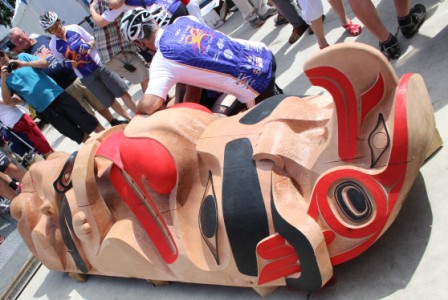 The cyclists were greeted by mid-20s, sunny weather and a ready-made audience which was on hand for The Works Festival as well as Canada Day celebrations. Among the cyclists was 13 year-old Alex Webb and a handful of seniors, including Edmonton Journal columnist, Nick Lees.

Lees originated the idea for the ride several years earlier when he visited the Skidegate and Masset area. He said it didn’t take much convincing to talk some of his cycling buddies to also join up. That was “easy,” he said. Along the route, they would stop at Aboriginal and non-Aboriginal communities to explain the role of the Stollery Children’s Hospital Foundation, a service dedicated to the health care of children. For those who may not know, approximately 25 per cent of the Stollery’s patients are Aboriginal children. 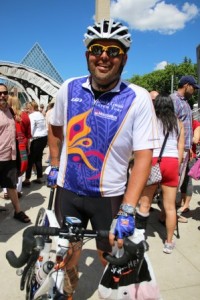 Webb, incidentally, has been the highest-earning fundraiser in the bunch with almost 29,000 dollars to his credit. The total tally was not immediately available at press time. Money is raised through financial donations of varying amounts from a variety of sponsors as well as the sale of beautifully designed long sleeve t-shirts that display a colourful butterfly on the chest and the bike route on the backside.

Upon arriving in Edmonton three of the group’s members took to the stage with a drum song followed by a raft of well-wishers and supporters wanting to purchase shirts, ask questions and pose alongside some of the cyclists as well as the 1,000 pound red cedar totem pole that was put on display.

The three metre-long totem, from the top, down, contains images of an eagle, a mother bear and her cub, a bison and some butterflies. Ben Williams, the carver, explained that the ashes of Haida children who died prematurely were mixed in with the paint used on the totem.

Haida art has a great history for its unique style and rich details. The towering poles of Haida Gwaii backdate hundreds of years, but almost disappeared from sight and mind. Fashioned from soft, red cedar, they actually symbolized family crests. The beauty of cedar is not only its gentle softness, but its ability to outlast most other woods due to its natural oils. 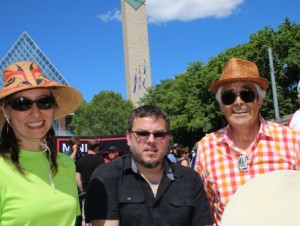 At one point in history, the tradition of pole carving nearly disappeared thanks to the bible-thumping missionaries who discouraged such practices. The art form did go out of style for close to a century around the late 1800s, however a gradual period of recovery took root, and by 1969, renowned artist Richard Davidson carved the first pole in 130 years. That was followed by the first modern pole carved by the late and world-famous carver, Bill Reid in 1978.

Today, this art form is gaining momentum. It has returned and is making its presence felt on a true comeback with many aspiring, young carvers wanting to take up the trade. Once again the magnificent structures are dotting the traditional territory of the Haida Nation.

As for the city of Edmonton, the pole is scheduled to be raised at the atrium of the University of Alberta in October.