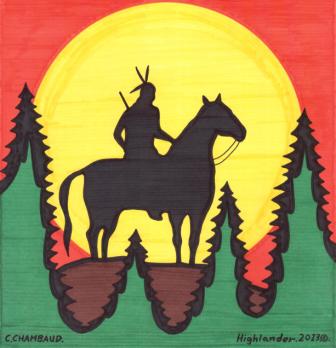 The relationship between horses and Native Americans has long been regarded as one of unparalleled kinship. It is a legendary tale of animal and human coming together to form a partnership that naturally harmonized the two spirits into one.

Horses were indigenous to North America thousands of years ago, but after spreading to Asia and Europe they became extinct in their homeland.

Spanish explorers brought horses back to the Western Hemisphere in the mid 1400s. Returned to its natural environment, the horse broadly flourished and was revered as being a spiritual or mythical creature by many Indigenous tribes.

It is said that the Native people immediately became enchanted by the “Horse Nation” and began to build a close relationship with them. From then on the Aboriginal people of North America became world-renowned horse people. 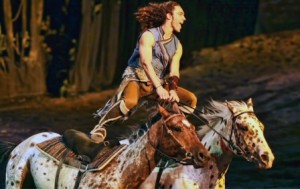 Odysseo by Cavalia is a dazzling spectacle of equestrian arts, performing arts, acrobatics and theatrical showmanship, in Edmonton until August 10.   Article by Brandi Morin, Photo supplied.

Odysseo, by Cavalia recently trotted into Edmonton and will perform over four-weeks their equine show under “The Big Top,” that combines horses with show-stopping entertainment. The spectacular production sees 69 equine performers take centre stage with a dazzling cast boasting skilled horsemanship and jaw dropping tricks and stunts whilst on horseback.

Cavalia may be remarkable for the average person to experience because this spectacular type of interaction between man and animal is not often seen in our fast-paced modern Information Age era which tends to be disconnected to nature.

Other than for sport, the horse/human connection is perhaps evolving into one of mystical folklore, whereas less than a century ago mankind was almost entirely dependent on this majestic animal.

There are several Aboriginal themed scenes in the Odysseo show that take viewers back to a day gone by when Natives and horses lived side-by-side.

Horses transformed the way of life for many tribes becoming their primary means of both travel and hunting and they became valiant warriors in times of war.Considered an equal, the Native people treated their hoofed companions with utmost respect and care. Often times they would share living quarters and the trust bond was such that rarely were they bridled or fenced in, rather they roamed free amongst the tribe. 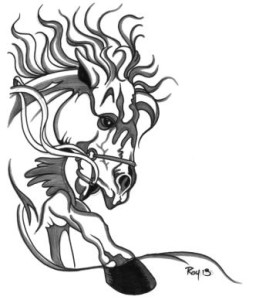 Curious training methods were practiced including the river method, where a horse was lead into a river and mounted. This was successful in breaking wild horses because they didn’t buck in the water.

A bridle of sorts was fashioned by American Plains Indians to help control the horse, which they already made look effortless. The bridles, which were up to 20 feet long, were made from braided sinew material or horse hair to provide both length and strength. The purpose was to have it drag along the ground or be tucked into the waist so in case the rider fell he would be able to stop his horse from running away.

One Siksika (Blackfoot) myth tells of how their relationship with the horse unfolded:

As an orphaned and abandoned boy, Long Arrow was adopted by the elder GoodRunning. Upon reaching manhood, Long Arrow asked Good Running how he could repay him. Good Running told him of a spirit people at the bottom of a distant lake who had an unknown animal, swift as an elk but also a burden-carrier, like a dog. It was called ponoka-mita (Elk Dog).

Long Arrow found the lake and met a young spirit who took him to the bottom, where the spirit grandfather lived. The young spirit told Long Arrow to watch for a glimpse of the old man’s feet, which he kept hidden under his long black robe. If Long Arrow saw them, the old man would grant his request.

After four days, the old man’s robe caught on a post, and Long Arrow saw that he had hoofs like the Elk Dogs. The old man was the master of the Elk Dogs. Long Arrow asked for three things: the black robe that prevented horses from running away, a rainbow-colored quilled belt that carried Elk Dog dance songs and prayers, and a herd of the animals. The old man granted the requests and also gave Long Arrow a magic rope to catch the Elk Dog. And so the Blackfoot have been horse-people ever since. 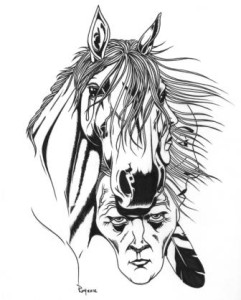 By the 1700s essentially all tribes in the west were mounted. The horses fortified the nations and assisted in the fight for Indian lands.

At one point the United States government tried to annihilate horses from indigenous culture as part of their attempted conquest over Native people and their territory. Although many horses died during that dreadful period, enough survived to multiply and again carry on their lines throughout the continent.

The Paint or Pinto is most symbolic of Indian horses, but there are many different breeds that are associated with Native America such as: The Morgan, American Saddlebred, American Saddle Horse, Rocky Mountain Horse, Palomino, Buckskin, Appaloosa and Pony of the Americas. The world’s most popular modern breed is the American Quarter Horse.

Cavalia incorporates many of these kinds of horses and in their show remind us of one of the most epic relationships ever formed between man and beast. Lest we forget that at one time they were a way of life, not a machine or an inanimate object, but a wild, living spirit with pride, intellect and unique character. Since time immemorial they have shared man’s hardships, carrying him through trials and triumph and are widely

celebrated as one with the Indian. Together with practice, patience and a genuine desire for relationship, horse and man can still form a bond that borders on divinity.

Many still practice the horsemen way of life and strive to keep the tradition alive.

Oglala Lakota Elder, Emil Her Many Horses said in 2009, “For some Native peoples, the horse still is an essential part of daily life. For others, the horse will always remain an element of our identity and our history. The Horse Nation continues to inspire, and Native artists continue to celebrate the horse in our songs, our stories, and our works of art.”

The Odysseo show runs now through to August 10. For more information head to www.cavalia.net