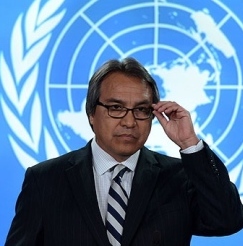 After visiting with several of Canada’s First Nations leaders and government officials last year,  Anaya issued his report on May 12, 2014. In it, he  confronts the federal government on several areas, including education, energy projects on reserves and missing or murdered Aboriginal women. 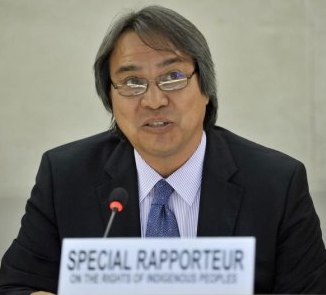 “It is difficult to reconcile Canada’s well-developed legal framework and general prosperity with the human rights problems faced by Indigenous peoples in Canada that have reached crisis proportions in many respects,” writes Dr. Anaya, the UN’s special rapporteur on Indigenous rights.

“Moreover, the relationship between the federal government and Indigenous peoples is strained, perhaps even more so than when the previous special rapporteur visited Canada in 2003.”

The report also notes that the “disturbing phenomenon” of missing and murdered Aboriginal women has further strained relations, and it calls on Ottawa to launch “a comprehensive, national inquiry” into the issue of why Aboriginal women and girls remain vulnerable to abuse.

Dr. Anaya  states that “the numerous initiatives that have been taken at the federal and provincial/territorial levels to address the problems faced by Indigenous peoples have been insufficient. The well-being gap between Aboriginal and non-Aboriginal people in Canada has not narrowed over the last several years, treaty and Aboriginals claims remain persistently unresolved, Indigenous women and girls remain vulnerable to abuse, and overall there appear to be high levels of distrust among Indigenous peoples towards government at both the federal and provincial levels.”

Anaya concluded that “Indigenous peoples’ concerns merit higher priority at all levels and within all branches of Government, and across all departments. Concerted measures, based on mutual understanding and real partnership with Aboriginal peoples, through their own representative institutions, are vital to establishing long-term solutions. To that end, it is necessary for Canada to arrive at a common understanding with Indigenous peoples of objectives and goals that are based on full respect for their constitutional, treaty, and internationally-recognized rights. ”

First Nation Chiefs and Aboriginal leaders across the country are supporting Dr. Anaya’s report and calling for the government to implement his recommendations.

“We are calling on the Government of Canada to work with First Nations to implement these important recommendations to ensure these priorities are addressed in ways that work for our peoples,” said AFN Regional Chief for Quebec Labrador Ghislain Picard.  “First Nations fully agree that Canada must bring much more attention and action on the issues facing our people, issues that affect all Canadians.  This includes full respect and implementation of First Nations rights, title and Treaties and ensuring safe and healthy communities for our people.  We welcome as well his support for our call for a national public inquiry on missing and murdered Indigenous women and girls.  There is a groundswell of support for such an inquiry and the Government of Canada must hear this call and act on it now.”

In October 2013, Dr. Anaya traveled to six provinces and visited a number of First Nations communities.

The report sets out recommendations for Canada to comply with minimum international standards for treatment of Indigenous peoples, including improving socio-economic conditions with a focus on education outcomes and adequate housing; addressing over-representation in the criminal justice system; taking action to end violence against Indigenous women and girls, including calling a national inquiry into missing and murdered Indigenous women and girls. It recommends addressing legal barriers to the exercise of self-government including meaningful consultation on legislation and the development and implementation of policies and programs; reforming the comprehensive claims process; ensuring that resource development projects do not infringe on Aboriginal rights and title and that First Nations be fully engaged in any such projects.

After many months of refusal by the Harper Government to provide formal consent to Dr. Anaya to conduct the study in Canada, First Nations leaders are welcoming the release of Dr. Anaya’s report.

“Dr. Anaya’s critical study on the rights of Indigenous Peoples in Canada is a clear and objective report on the conditions facing Indigenous communities in Canada. As confirmed in Dr. Anaya’s report, the Harper government continues to aggressively pursue a unilateralist legislative agenda that allows unsustainable resource development without meeting the government’s legal and constitutional duty of consultation and accommodation on projects that impact our inherent Indigenous Title, Rights and Treaty Rights,” stated Grand Chief Stewart Phillip, President of the Union of BC Indian Chiefs.

“The Harper government still relies upon ineffective, legally outdated, prejudicial and dishonorable policies of engagement with Indigenous Peoples in Canada.  As indicated by Dr. Anaya, this approach has contributed to an adversarial atmosphere of contentiousness and mistrust that does not allow for beneficial economic development or social peace.  We absolutely expect Canada to carry out the recommendations that Dr. Anaya made, specifically the recommendation that Canada undertake a comprehensive inquiry into missing and murdered indigenous women.   Further, we remind the Harper Government that Canada endorsed the UN Declaration on the Rights of Indigenous Peoples (UNDRIP) in November 2010 and the whole world is watching to ensure that Canada fully implements the important recommendations within Dr. Anaya’s report.”

“We thank Dr. Anaya for his thoughtful and comprehensive report on the situation of Indigenous Peoples in Canada.  He has rightfully acknowledged that a crisis based on widening socio-economic gaps between Indigenous and non-Indigenous communities exists in this country and must be immediately addressed as the actions taken by the federal and provincial governments to date have clearly been insufficient,” said Grand Chief Edward John of the First Nations Summit political executive.  “We urge Canada to unequivocally accept this important report and take the necessary steps to immediately implement its recommendations.”

BC Regional Chief Jody Wilson-Raybould said, “Dr. Anaya’s conclusions and recommendations all speak to the need for strengthening our collective resolve to ensuring reconciliation between Aboriginal Peoples and the Crown, and to translating the promise of section 35 of the Canadian Constitution and the articles set out in UNDRIP into practical benefits on the ground in all of our communities.”  She added, “While the Special Rapporteur’s report acknowledges that efforts are being made, all Canadians must surely agree with him that the pace of change is completely unacceptable in a country as prosperous as ours where the socio-economic conditions of Aboriginal peoples have not improved since the last visit of the UN Special Rapporteur over 10 years ago.”

She concluded, “In support of our Nations rebuilding and moving beyond our colonial past, the federal government must follow the Special Rapporteur’s recommendations. This necessarily includes amending its policies and laws to reflect true reconciliation, under an overarching framework applicable to all federal departments and agencies. Working together we can and will create a stronger Canada.”

by Alberta Native News staff with files from CP