The chiefs of the Treaty 8 First Nations of Alberta are fed up with the province’s disregard for meaningful consultation. A dozen Treaty 8 chiefs gathered to protest in Edmonton  by boycotting  a meeting with the Ministry of Aboriginal Relations set up to discuss the Aboriginal Consultation Act. The chiefs  say they have repeatedly raised several concerns with the act over the last 10 years to no avail.

“We are upset that our input isn’t being heard and we’re just being pushed aside,” said Beaver First Nation  Chief Trevor Mercredi. “Anytime we make a recommendation it’s not taken into account. Since day one everything has been the same- they (the government) just laid it out for us.” 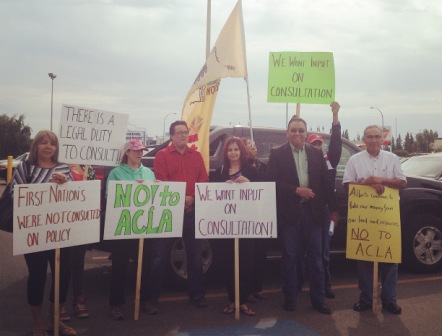 Some of the protesters who gathered in support of the Treaty 8 Chiefs. Article and photo by Brandi Morin

The Chiefs traveled from northern Alberta to the Ramada Inn in Edmonton on August 28 where Aboriginal Affairs Minister Frank Oberle waited for them to attend a meeting with him. They however, turned down the meeting and united together to send a strong message to Oberle.

In a letter addressed to the Minister, the Chiefs stated:

“Treaty 8 First Nations in Alberta has and continues to reject the Aboriginal Consultation Policy. In addition to this policy the Government of Alberta has now passed Bill 22 on the Consultation Levy Act.”

The Chiefs  emphasized that they would not attend an engagement session with Oberle until they have completed direct consultations with each of their 24 respective First Nations and that it is their right under the Duty to Consult.

Already passed, but yet to be enacted, the legislation endeavours to assimilate and control how industry will consult with Aboriginals about development affecting their territory. To make sure that First Nations have enough resources to fully engage, a levy on industry is to be imposed.

Treaty 8 believes they are being left with no say in the matter when it comes to choosing which lands will be affected. It will also impact smaller bands with limited resources who are already struggling to keep up with impending development. 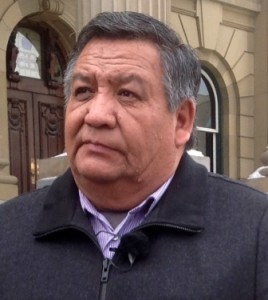 “The Alberta Government is always finding ways to undermine our Treaties,” said Mikisew Cree Chief Steve Courtoreille. “The consultation levy act is a prime example. We’re going to put our foot down and our statement is to let them know that we’re not happy.”

He went on to reference the Mikisew 2005 Supreme Court of Canada case where the Mikisew successfully argued that the Canadian Government had failed to consult with them when it attempted to take up lands in Wood Buffalo National Park. The landmark court case set a precedent for First Nations consultation, said Chief Courtoreille. Some Nations of Treaty 8 are preparing to legally challenge Alberta over Bill 22 if needed.

He explained, “We’re going to have to start pushing back on what’s right. That (court decision) applies to every First Nation across this country. First Nations have that right to determine what their consultation will look like and most First Nations in this country have their own consultation policies. So they have to honour those policies on a case by case basis. When they originally signed the Treaties they went around from community to community. This is the same situation; we’re not going to go to them they’re going to come to us.”

“From the outset this process has been flawed, so how can you possibly have a First Nation’s Consultation Act when you haven’t consulted the First Nations?” declared Sherman.

“The government’s idea of having a consultation is inviting folks to a meeting for a couple of hours and having a chit chat.” 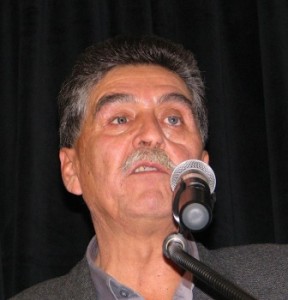 The Liberals believe the Chief’s voices need to be expressed in the law and in the regulations and that the government should have an equal partnership with them.

Treaty 8 wants the legislation scrapped all together and re-written with their inclusion before any talks of moving forward can begin.

“If you want a process to be successful create it with the Chiefs and communities, from the ground up, and work with us to build policies that work for First Nations, Industry and Albertans alike.”