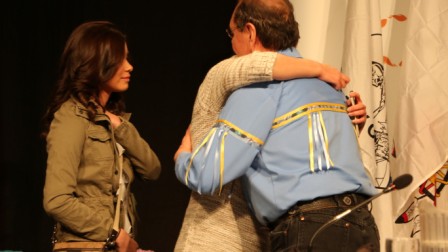 As survivors of Indian residential schools converged on Edmonton’s Shaw Conference Centre to take in the March 27 – 30 seventh and final Truth and Reconciliation (TRC) National Event, staff and volunteers listened and documented the testimonials and stories of the former students.

They were stories that, for many, had been long bottled up, not even shared with their own immediate families. For so many, they were sad accounts of the tragic legacy of an experiment orchestrated by churches and the Canadian government in their attempt to “take the Indian out of the child.” 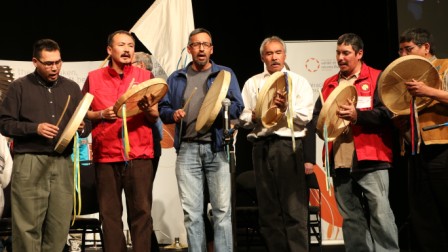 Drummers sing for the closing ceremonies at the final TRC National Event in Edmonton on March 30, 2014. (Photos and story by Terry Lusty)

The impact on the Aboriginal students between the 1830s and 1996 begs any of many adjectives such as: unloved, unwanted, confused, frustrated, lonely, depressed, ashamed, scared and crying. Other descriptors include: hurt, bitter, afraid, suicidal, anxious, angry, and more.

“I went through all the atrocities that many of you went through,” said Ann Shouting as she recalled the sexual, physical, mental and spiritual abuses and resulting trauma. While watching the movie, Schindler’s List she felt a surging that excited and scared her out of the house to grab a huge breath of fresh air not knowing exactly the cause of same.

Shouting, from southern Alberta, sought out a close friend and asked her, “Did it really happen? Were we herded into this cubicle with a small, little window – like when the Germans herded Jews into the gas chambers?”

“Yes,” she replied. “It was a steam room. It was very hot, I could hardly breathe. Some girls were passed out and we were banging on the door with the little window. Some were crying and screaming. Then the door opened and the nun was shoving us back in there.

In the presence of staff, the girls quickly learned to speak in whispers. “We even had names for the nuns and we laughed behind their backs,” said Shouting. The sexual abuses were not discussed.

As far as education went, little transpired she said. “When I left, I could hardly read, I could hardly speak English.” In the end, “I learned to let go.” She also learned to forgive. “The people at the reserve are still hurting,” she added. 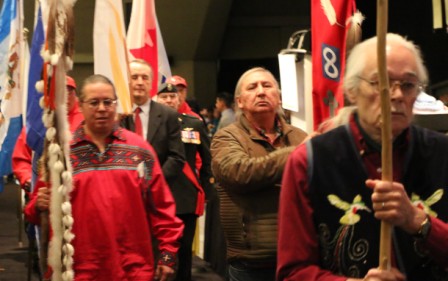 Dignitaries march out during the closing ceremonies of the final TRC National Event.

Another Kainai First Nation survivor, Lester Melting Tallow, went from age five-and-a-half until twenty, as a stutterer because of residential school. His son traveled all the way up from Colorado to sit with him as he gave his statement at the Commissioners’ Sharing Panel. Sadly, he has little if any contact with his daughters, a fact for which he blames himself.

Melting Tallow likened his story in school to being on “a conveyor belt.” The experience was terrible – “hate, beatings, sodomy, rape!” he exclaimed.

“I left there hardly speaking, I was ashamed,” he admitted. He wound up hiding and not speaking to people because he feared them.

“Now I can start forgiving because I never realized I was carrying pain in my soul for 70 years. I’m walking away today with a lighter heart, leaving that hate behind: sharing with you, sharing with my son and my children and grandchildren,” he expressed to a long and loud round of applause.

In closing, he admitted to not having anything to place in the Bentwood Box. “If I had my wish, it’d be the commissioner (Murray Sinclair),” he concluded.

A most moving testimony, riddled with guilt and sorrow, was that of Mary Simon, an Inuit leader who humbled herself by opening up and relating her touching story.

“How could I understand your pain when I never really, truly walked your path?” she inquired. “It will take all of us to involve ourselves to bring true reconciliation.”

“Our world suddenly ended after Grade 6 because everybody except me and my siblings had to go to residential school. I was denied education because my mother never went to school, couldn’t speak English. Her dad educated her with home schooling.

Her granny used to take the kids to visit the parents who had to give up their children to the residential schools. The “anguish and pain” on their faces never left her. “I felt guilty,” she confessed. “I shouldn’t have had the comforts and love that my parents gave me when I was growing up.” She didn’t learn to deal with that until she hit 40. She experienced a decade of depression which is why she always tried to be a good and honest leader, she informed the crowd. The applause was long and loud.

Be the first to comment on "TRC testimony is painful, yet healing for many"