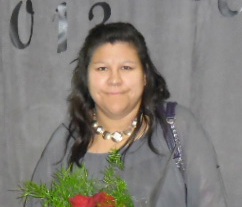 “I am extremely honoured to be chosen as the Edwin Parr Nominee for Northland School Division,” said Gladue-McLeod. 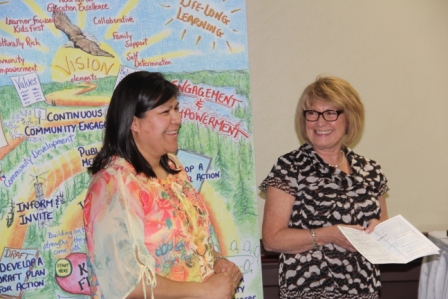 Deborah, who started out as a teacher assistant with NSD61, teaches grade 1 at St. Theresa School. She was one of 20 first year NSD61 teachers to graduate from the Aboriginal Teachers Education Program (ATEP) in 2013.

“Mrs. Gladue-McLeod has developed a great rapport with parents and developed communication connections with them by making phone calls home, visiting homes, meeting with parents at school and sending newsletters,” said Shelley Stevenson, St. Theresa School Acting Principal. “She strives to make each student succeed at their level. Students feel loved and safe in her classroom.”

Deborah has been praised for developing lesson plans to help students succeed and make connections.

“Family is essentially the most important need in my eyes and making those connections for students has been a top priority,” said Gladue-McLeod. “I try to meet all learning styles because if my students express themselves best through drawing or by explaining themselves verbally, then it is always honoured and respected. Just because someone cannot read or write doesn’t mean they are not capable of learning and that is why I have my students demonstrate their learning through projects, presentations or simulations.”

Deborah, who is originally from Wabasca, is always willing to volunteer her time.

“Mrs. Gladue-McLeod volunteers at school functions such as sporting events and carnivals,” said Stevenson. “She is also part of the Mentorship Program where staff members are mentoring other students. She works hard for the benefit of all students in our school.”

Deborah says she is thankful to many institutions for her success and believes that ATEP has helped her develop into the teacher she has become.

“NSD61 has always been supportive in my determination to pursue my career when I wanted to become a teacher assistant and then a teacher,” said Gladue-McLeod. “I am thankful to the University of Alberta, Northland School Division and Northern Lakes College for developing ATEP. I am also thankful to Bigstone Cree Nation.”

Deborah was recognized at the NSD61 Long Service and Recognition Awards at the Sawridge Inn in Peace River on May 8th. She was accompanied by Ashley Jones from Bill Woodward School (Anzac) and Little Buffalo School’s Arlene Eldridge who were both in the running for the nomination. Deborah will also be recognized at the Alberta School Boards Association (ASBA) Zone One Awards Luncheon in the fall.