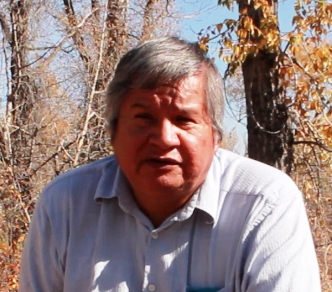 February 11, 2015 — A collision on a cold, windy Saskatchewan highway has cut deep into the heart of Canada’s arts community, now reeling with the deaths of four Western Canadian artists. The group was heading to the Piapot First Nation reserve to discuss a theatrical project called Making Treaty 7 in the hopes theatre students at the local school could do something similar. After cancelling the planned visit on February 9 because of a missed flight, they were on their way to the school the next morning on Highway 6, just north of Regina, when their Subaru collided with two other vehicles, killing five people, including the four heading to the meeting.

Michael Green of the Calgary theatre company One Yellow Rabbit (OYR), Kainai First Nation elder and educator Narcisse Blood, who worked with Mr. Green on Making Treaty 7, Michele Sereda, artistic director of Regina’s Curtain Razors theatre, and Regina-based multidisciplinary artist Lacy Morin- Desjarlais were killed. The fifth victim, Morley Hartenberger, 59, of Cupar, Sask, was in another vehicle.The RCMP say there was drifting snow at the time, but could not confirm if weather was a factor.

The board and staff of Making Treaty 7 issued the following statement as they  deeply mourn the tragic loss of ELK SHADOW / PONA KO’TAKSI, also known as Michael Green, and MIDDLE BULL / TATSIKIISTAMIK, also known as Narcisse Blood. 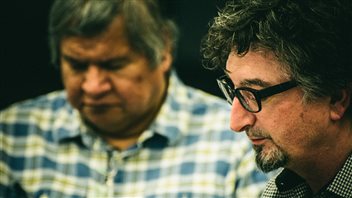 “Elk Shadow was the founder and visionary behind the Making Treaty 7 project.  We celebrate today his commitment to a shared belief that “WE ARE ALL TREATY PEOPLE”.  We are committed to ensuring that his spirit will live on.  Elk Shadow, One of Long Vision, had no boundaries and could not see color.  He was an inspiration to everyone he touched. He told us: This is the most rewarding and electrified piece of art that I have ever created in over 30 years and to have, through this process, through the Sundance, been blessed with a spiritual awakening is a gift I could never have expected.

“Middle Bull was the Cultural and Spiritual Advisor to Making Treaty 7.  He was the Grandfather to the cast and crew;  he was the walking encyclopedia of our language, our culture and our history.  Together, Middle Bull and Elk Shadow brought First Nations and non-First Nations together.  They were the heart and soul of Making Treaty 7.  Narcisse will be truly missed within our spiritual circles.

“We also extend our deepest and most heartfelt condolences to the families of LACY MORIN-DESJARLAIS and MICHELE SEREDA for their devastating loss.

“Kitaitamatsin or Until We Meet Again.”