On cold February days long ago, one of my favourite escapes was to the outdoor ice rink next to our old school in Attawapiskat. After winter blizzards, the ice surface would be covered in drifting snow three to four feet deep. As a teenager the challenge of clearing all that white snow drew me out the door early in the morning and down to the rink.

Few people would be up and around and other than the sound of a snowmobile engine here and there in the quiet frozen white landscape. At the rink often I would find a small path had been shovelled by someone who had found only the energy and will to start the job. The local maintenance team that looked after the ice always provided several shovels spread about the rink perimeter in case someone decided to tackle the snow removal.

I would arrive bundled in several layers of clothes, a warm moose hide hat lined with beaver fur, a pair of thin work gloves covered over in heavier moose hide mitts and a scarf to break the freezing wind from my face. In the comfort of my warm clothes I was happy to get to work. I knew through experience not to work fast or hard because sweating under my clothes would be dangerous. Even though I was within the community surrounded by people tucked into their cozy homes, I knew that getting chilled or even frost bitten was a real danger at minus 30 and 40 degrees. Staying dry was a must. 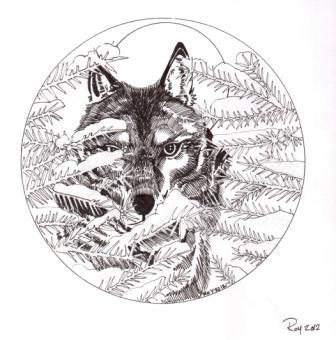 I recall the steady rhythm of moving the shovel slowly one load at a time to remove the snow. I would cut one single path along one blue line to clear one quarter of the surface. I always felt a sense of accomplishment in seeing the single path emerge in the deep snow to expand and uncover the precious ice surface.

I never cleared the entire rink by myself. Others showed up during the day here and there to lend a hand. A few showed up to watch me work as that much effort by one person certainly would be entertaining. Others would just stop in to see how I had progressed and if the ice was clear so that they could play some hockey. I didn’t expect any help but it helped my cause when many young boys would pick up a shovel and help with the work.

I remember being happy to see the arrival of cousins my own age arrive to help shovel. Boys like Antoine Wheesk, was a huge kid and very powerful so he made a big contribution to clearing the ice. Thomas Kataquapit could be counted on to show up and shovel because he was in love with the game of hockey and just wanted to hit the ice with his skates. Joey Okimaw another gifted hockey player would come along and help dig the rink out from its white blanket. As ice surface revealed itself these hockey enthusiasts would take breaks and show off some of their new moves and shots.

Younger boys came and went as we worked eager to be able to play. They waited for a large patch of ice to appear out of the deep drifts. As soon as one end of the ice was cleared, the two nets were moved to make a miniature ice rink and the first game of the day was played out. A group of ten to 15 boys would get together to form two opposing teams and the game was started without rules or form. Everyone was a forward and the players moved in a chaotic mass as the gang chased the puck.

I often took a break from my work to join the game. There were always enough sticks and pucks around and willing players once the ice was cleared. We played the game mostly in haphazard ways with some of us on skates and many stomping about on our heavy winter boots. The only thing on our minds was to pass the puck and edge it towards the opponents net.

After hours of work and some play, I would head home to have something to eat.After several hot cups of tea, a bite to eat and a chat with my mom Susan, I was fuelled up for a few more hours of shovelling.

When I returned I was happy to find other hockey lovers had showed up to clear away the snow and things had progressed. As we shovelled, more and more local players came along to help out. The closer we got to uncovering the ice, somehow news spread in town and that drew out more players in anticipation. As more ice showed up the playing surface increased and the hockey boys and girls grew in a hodgepodge kind of dance in skates and boots while moving pucks all over the place.

As more ice surface was revealed we frantically shovelled while taking breaks to play our winter game. Although most of the time it was minus 20 or 30 Celsius that did not deter us in our quest to bring the ice back to life and play our hearts out.

It would be dark by the time we finished and the rink would come alive with flood lighting and the cover of a thin haze of frigid air. By that time I was exhausted but I was satisfied to stand with some of my cousins and friends along the rink side on top of the huge snow piles we had created to watch a real game of hockey appear before us. The adults and older kids had arrived to claim the ice and they thrilled us with their skill as they skated like pros in their equipment and slapped the puck off the boards.

In the remote north, where we felt like we didn’t have much, there was a sense of pride in maintaining our own rink. No one was there to guide us or tell us what to do, we just did it and it felt great. I miss that old rink and sometimes when I am shovelling snow in February, I enjoy recalling how wonderful it felt to be out there in the winter sun on the ice rink in Attawapiskat and dealing with life one shovel at a time.

Be the first to comment on "Under the Northern Sky: Outdoor rinks – one shovel at a time"