Two Aboriginal artists were among eight local artists honoured recently by the Edmonton Arts Council (EAC) – Todd  Houseman and Will Belcourt. Houseman is a performer and Aboriginal People’s Interpreter, who along with partner, Ben Gorodetsky, will be furthering the development of Folk Lordz, an improvised theatre show driven by Cree storytelling and Chekhovian character drama. Belcourt is an award winning multi-talented artist who is in the process of creating a new body of music that will be rooted in traditional Métis folk music; a project that will include songs taken from four generations of his family’s history.

On February 2, the EAC hosted a recognition event for the 2014 recipients of the Cultural Diversity in the Arts project grants and the Edmonton Artists’ Trust Fund  awards.  The program was established by the EAC “to recognize that artists from all parts of the world enrich Edmonton’s cultural scene.” The award is available to artists at any stage of their professional career.

During the evening event, which was held at the Timms Centre for the Arts, Edmonton Mayor Don Iveson and Alex Draper, the Donor Grants Associate with the EAC Foundation presented the eight local artists with cheques for $7,500 each. The funds are intended to offset living and working expenses, allowing the artists to devote a concentrated period of time to their artistic activities, career enhancement and/or development.

“The City of Edmonton values diversity of artistic expression,” said Paul Moulton, Executive Director of the EAC. “We are grateful for this wide-ranging group of writers, filmmakers, musicians, actors, performers, visual and media artists who call Edmonton home – for all that they bring to the Edmonton Arts Community, and to the lives of Edmontonians.”

The recognition of the artists came just three weeks after the EAC called for artists to submit their resumes and participate in one or more of three projects that involve supplying art for the arena district. The art, however, does not have to follow a predictable sports theme.

More than 175 artists submitted their portfolios and resumes before the deadline. In all nearly one million dollars will be spent on the three art projects with the majority going to the top three winners, whose work will be selected by juries that will comprise city representatives, the Edmonton Arena Corporation, the project architects and artist peers. The winners are expected to be announced in April. 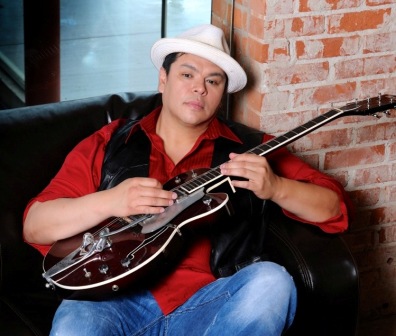 Will Belcourt said when he was notified about the EAC’s plan to recognize him he was “surprised, and elated and very excited to be honoured in this way” for his art and creativity. He went on to say that “ it’s very humbling and I am very appreciative that I was selected among the candidates to receive this honour.”

Belcourt said the award money “means that for the time being I can concentrate completely on my art without the interruptions that life can throw at you, especially when it comes to finances.” He noted that being a full time musician has many challenges, and that he is thankful for this opportunity .

“Walking this path is a long hard road with many challenges,” he added. “I’ve been very fortunate and very blessed by the Creator for my many gifts.”

The talented entertainer has garnered respect through both his live performances and his recorded music. He has toured extensively and has performed and appeared on television, radio and online programs. He has been featured in print in various magazines, newspapers, and online blogs and his music is in heavy rotation on radios around the world. Will Belcourt has also shared the stage with many great artists, including Shane Yellowbird, Tom Jackson, Laura Vinson, Digging Roots, Dwight Yoakam, Big Sugar, Billie Joe Green, Star Nayea, Donny Peraunteau, Buffy St Marie and others. Music from his albums has been selected (as feature tracks) for award winning television shows that include Blackstone and Sky and Chang. He has also been featured as artist of the month on CFWE 98.5FM, and has charted numerous times on national radio and the National Aboriginal Countdown on NCI Radio, which features some of today’s finest musical acts and performers.

Belcourt has four albums on the market and a fifth is on the way.

“The new (electronic) album, Orbiter, has been completed,” he announced. “It hasn’t been released to the public yet; that will likely happen in 2016. At the moment I am recording a new rock-based album that includes a variance of influence and delves into blues, folk, gospel and alternative country. Hopefully it will be wrapped up and ready for release this summer.”

After that’s done he plans to record “an album rooted in traditional Metis folk music by developing songs taken from four generations of family stories.”

Belcourt is currently in the process of building a range of marketing tools that will include music videos, websites and a tour schedule and documentary that will follow his travels in the next year, both when he records and goes on tour. 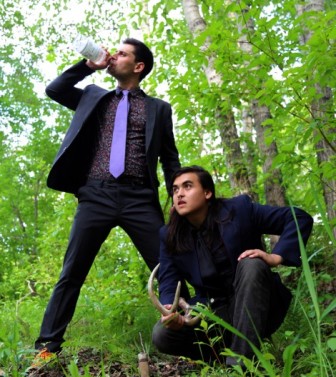 Todd Houseman said he was “surprised but very pleased” to find out that he was being honoured by the Edmonton Arts Council for the work he’s been doing and noted that any award money would go toward “further development of the project (Folk Lordz) we are currently working on.”

Folk Lordz, noted Houseman, “is both colourful and dark, happy and sad,” symbolic of the cultures that Houseman and his counterpart Ben Gorodetsky represent. Gorodetsky is a first generation Russian-Canadian theatre artist and Folk Lordz represents a combination of the two cultures.

The first part is First Nation in origin (Cree) and delves into the harshness of winter, starvation, explained Houseman, and the second moves into Chekhovian culture, which is quite the opposite of Cree culture. The entire show is improvised, with audience involvement and the performers utilize audience comments to further their own improvisational skills.

“It’s a great deal of fun and every performance is different,” he said. The next step for Folk Lordz comes by taking the initiative on the road.

“We’re planning a journey into various northern First Nations communities where we will talk to the Elders and traditional storytellers to better understand the foundations of their oral tradition. We are receiving some help on this part of the project from Mason Mantla, the Social Involvement Program Coordinator for B.C.’s Tlicho Nation community government.”

Todd Houseman has been improvising with Rapid Fire Theatre since the summer of 2009 and is currently a senior member of the company. He was accepted to the company after performing in the high school improv tournament, the Wildfire Festival, where he performed in the Canadian Improv Games as well as the Nosebowl.

Through Rapid Fire, Houseman has performed in weekly shows such as Theatresports and Chimprov and continues “to follow the company from Varscona, to Citadel, to the Moon.”

In addition to being an improviser Todd is also a local actor who has appeared on stage as well as in the TV show Delmer and Marta. Todd was born and raised on Treaty 6 land in Edmonton. In his free time, he interprets his family’s Cree ancestry both at Fort Edmonton Park and within the Aboriginal arts community.