(ANNews) – The St. Albert Healing Garden, or as it is known in Cree, Kåkesimokamik, officially opened to the public on Friday, September 15, 2017 during a late morning pipe ceremony and celebration of culture on the north banks of the Sturgeon River, along the popular Red Willow Trail. The community-led initiative acknowledges survivors of Indian Residential Schools and is a visible sign of St. Albert’s commitment to work in unison with First Nation, Métis and Inuit peoples, and maintain ongoing and positive relationships with all residents.

“The idea for the garden, came from Rev. James Ravenscroft, a former United Church minister in St. Albert,” explained Kelly Jerrott, Cultural Services Director for the City of St. Albert. “He brought the concept forward following a conversation he had with Maggie Hodgson, a well-known and respected addictions program developer and counsellor, women’s advocate, and author.”

“This was an exciting collaborative initiative that included input from a community planning committee with participation from residential school survivors, First Nations and Métis communities, the United Church, Catholic Church, St. Albert Arts and Heritage Foundation, Michif Cultural Connections, City of St. Albert and the public.” 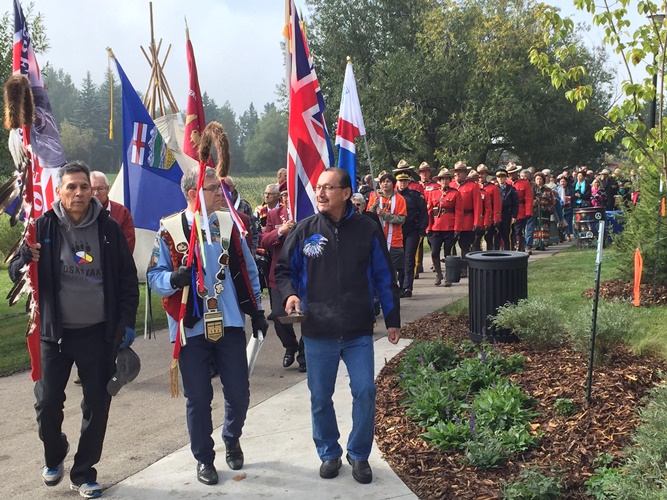 One of the first of its kind in Canada, The St. Albert Healing Garden was approved by City Council in 2015. A sod-breaking ceremony took place in May, 2017 with construction completed in late August. 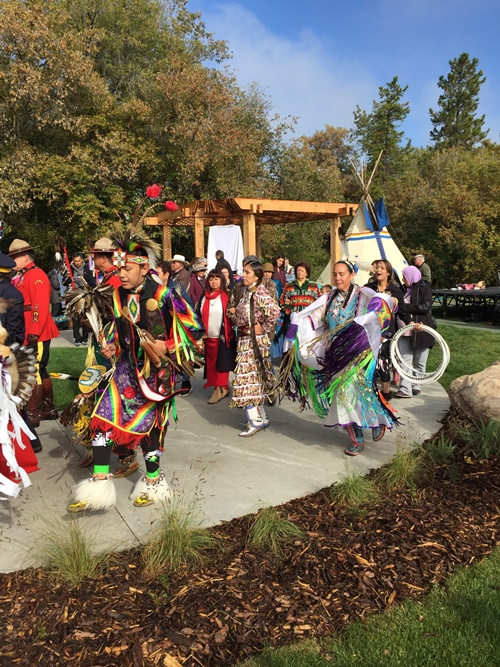 Dancers joined the Grand Entry at the official opening of the St. Albert Healing Garden held on September 15.

“We’re hopeful the healing garden will bring awareness, education and cultural teachings to the community,” said St. Albert Mayor Nolan Crouse. “It is one of the many ways we can answer the calls to action from the Truth and Reconciliation Commission.”

A multifaceted initiative, The St. Albert Healing Garden will actively acknowledge survivors of Indian Residential Schools and provide a place where truth and reconciliation can thrive and grow.

“There will be ongoing activity in the garden,” noted Jerrott, who said plans are already underway “to develop initiatives with schools, Indigenous individuals and communities, as well as local community organizations such as the Musée Héritage Museum and Michif Cultural Connections.” 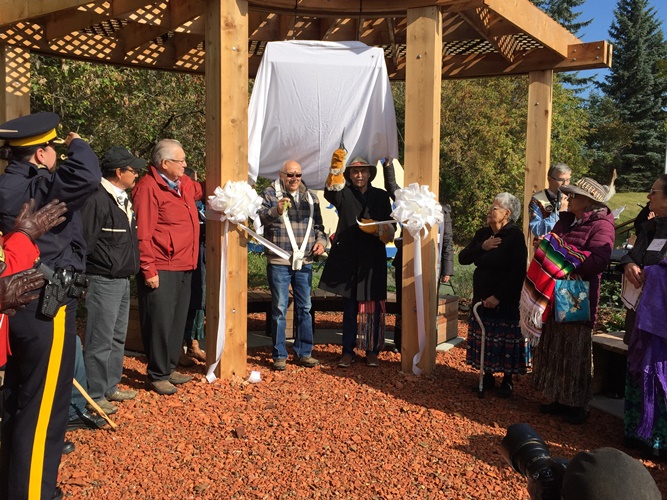 The St. Albert Healing Garden officially opened to the public following a ribbon-cutting ceremony on Friday, September 15, 2017 in St. Albert.

“I could tell the event was going to be both successful and memorable when the sky opened up and the sun revealed itself in a beam of light that shone across the pathway just as the Grand Entry got underway,” smiled Jerrott. “It was a special day and a very educational one as well. The City is very pleased and proud to be involved in this project and to support the recommendations as described by the Truth and Reconciliation Commission.”

Be the first to comment on "St. Albert Healing Garden captures the essence of reconciliation"