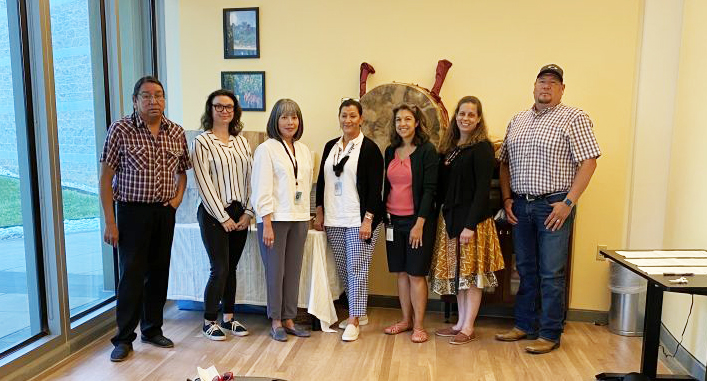 Siksika Nation, Alberta – (July 2021) – Siksika Nation leaders met with representatives last week from the Smithsonian’s National Museum of the American Indian to repatriate a Prairie Chicken Society Headdress and a Weather Dance Robe, sacred items that were taken over a hundred years ago after the Canadian and American governments banished ceremonial practices and property in an effort to eradicate Indigenous peoples and their way of life.

In a ceremony held on July 7 in Suitland, Maryland, Siksika Nation Chief and Council representative Councillor Kent Ayoungman and Ceremonial elder Herman Yellow Old Woman attended the historic occasion and were delegated to collect the Natowa’piists (sacred items) on behalf of Siksika Nation and return them home.

“The repatriation of our cultural property is necessary to the revitalization of the Siksika way of life and remains a top priority for Siksika Nation Chief and Council, who work with various public and private collections on repatriating Natowa’piists back to Siksika. It is a special thing to see these items coming home and to be a part of this process,” expressed Councillor Ayoungman who credits the work and persistence of Herman Yellow Old Woman who began the process over thirty years ago and to leadership, both past and present, who supported Yellow Old Woman along the way.

Siksika Nation was notified in May 2021 that the repatriation request was approved and that the sacred items would be returned to the Nation. The headdress was accessioned into the Museum of the American Indian in 1908 and the collector is unknown. The Weather Dance Robe was acquired by William Wildschut from Yellow Old Woman, a noted Siksika Weather Dancer in 1924.

This journey has been a personal one for Herman Yellow Old Woman, who is the great grandson of the Weather Dance Robe maker, Yellow Old Woman. He was known as a Weather Dancer—a medicine man who maintains a spiritual connection with Natosi (the sun) and whose primary function is the control of the weather during ceremonial occasions, such as the Sundance. The Weather Dancers’ ceremonial responsibilities also include providing blessings for community members.

Herman Yellow Old Woman, a Weather Dancer like his great grandfather who received his transferred rite in 2016, is extremely honored to be included and excited to see these sacred ceremonial items return home and be utilized once again in Siksika ceremony.

“These items have been gone for almost 100 years, so the thing that is amazing for us, is these materials (Natowa’piists) are going to go right back into action. There are transfers that will take place, sweats that will take place when we get them home. The Sundance is coming up in the next two weeks and they will be transferred and put right back into circulation, so today is an honour. It is very emotional,” explained Yellow Old Woman who participates in the annual Akoka’tsin in Siksika.

“You can feel the power and spirit in these bundles and I feel excited for our Nation, our people. The Prairie Chicken Society are going to be able to see and use this headdress the way our ancestors did a hundred years ago and I can imagine our ancestors and how excited they are,” shares Yellow Old Woman who invites all Siksika Nation members to attend the Akoka’tsin and welcome back their old relatives.

Siksika Nation would like to also acknowledge the work of the Department of Homeland Security for the safe transport of these sacred items through the border despite COVID- 19 restrictions and the National Museum of American Indian who has worked diligently with Siksika Nation on having these items returned safely to Siksika.

“Repatriation has always been one of the highest priorities for the National Museum of the American Indian,” said Machel Monenerkit, the museum’s acting director. “Our repatriation policy embodies our mission and vision, and we are proud to have worked with the Siksika Nation to ensure the return of these objects.”