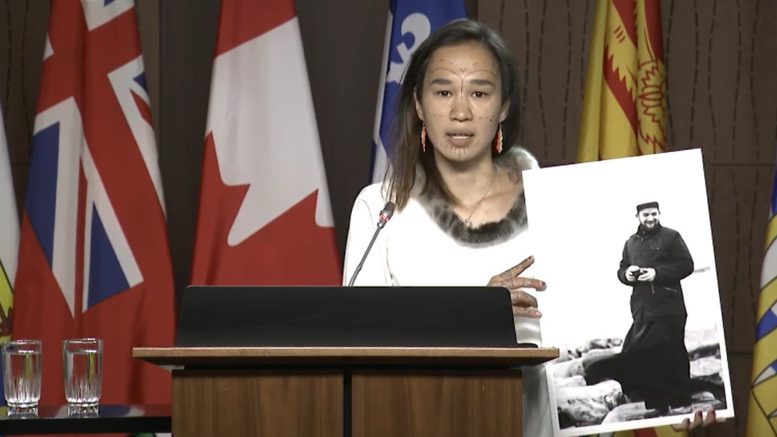 MP Mumilaaq Qaqqaq with a photo of French Oblate priest Joannis Rivoire, who is accused of sexually assaulting Inuit children at residential schools in Nunavut communities in the 1960s. (Screenshot photo).

(ANNews) – Two NDP MPs are demanding that Canada investigate the allegations of “crimes against humanity” in residential schools.

Mumilaaq Qaqqaq and Charlie Angus have told the Justice Minister of Canada, David Lametti, to launch an investigation into the system in order to bring justice to the perpetrators.

“Enough is enough. Indigenous people need truth and justice,” Qaqqaq said in a press conference. “We need a full and independent investigation that has the power to shine a light on every facet of this national crime and has the power to bring perpetrators to justice.”

“Minister Lametti, don’t you dare tell me you can’t do this. You have the authority. You just refuse to use it and that needs to end today,” she said.

The call for justice comes after the multiple discoveries of unmarked graves at Residential school sites across the country.

It began with the Tk’emlúps te Secwépemc First Nation when they discovered 215 bodies at a former residential school in Kamloops, B.C. This was followed by the Cowessess First Nation discovery of 751unmarked graves near the former Marieval Indian Residential School in Saskatchewan.

The most recent unmarked gravesite discovery happened last week when ʔaq̓am — one of four bands in the Ktunaxa Nation in B.C. — used radar at St. Eugenes Mission School to find 182 bodies.

From the late 1800s to 1996, Canada forcefully took 150,000 Indigenous children from their home and put them in Residential School Institutions — which were run by the church — where many were believed to be abused by staff and even murdered.

In 2005, 17 private investigation firms were contracted by the Federal Government to investigate the claims of abuse in the system. In 2016, the firms located 5,315 alleged abusers — both former employees and students.

Unfortunately, no criminal charges were laid, and only optional Independent Assessment Process (IAP) hearings were offered. The hearings did not involve the courts at all, but despite this 4,450 out of the 5,315 declined to participate.

“There is a reason for that.”

The two New Democrat MPs called on the Justice Minister for the appointment of a special prosecutor to lead the investigation.

“We cannot trust the Justice Department to do this without an independent special prosecutor and international observers,” Qaqqaq said.

The potential prosecutor should be completely funded and possess the power to compel testimonies and documents.

MP Angus said that the Federal Government has enough classified documents to extend the work of the Truth and Reconciliation Commission.

“(The Commission) did not have a mandate to pursue justice, to go after the perpetrators,” he said. “Canadians and Indigenous communities are calling for justice.”

The call for investigations should also be broadened to include other Federal Institutions, such Day Schools and Tuberculosis Sanatoriums, said the MPs.

However, Justice Minister Lametti stated that in order to appoint a special prosecutor, the police must first launch an investigation.

“This is an exclusive power of the police,” Lametti’s press secretary Chantalle Aubertin, said. “We will consider all options that will allow the survivors, their communities and the country to move forward on the path to healing and reconciliation.”