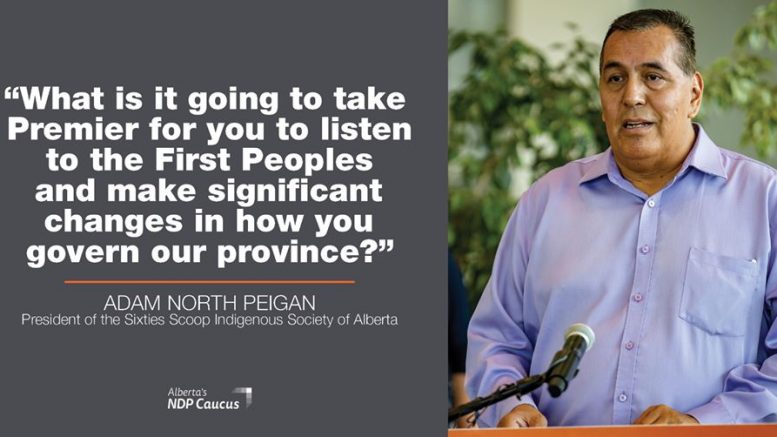 (ANNews) – On August 19, 2020 Adam North Peigan, President of the Sixties Scoop Indigenous Society of Alberta (SSISA), joined the call for the firing of Premier Jason Kenney’s racist speechwriter, Paul Bunner, and for the removal of another appointee Dr. Chris Champion, from the Alberta Curriculum review panel “in order to properly rebuild trust and move forward with reconciliation.”

So far, however, Jason Kenney has chosen to ignore the requests of not only the SSISA, but also the Grand Chiefs of Treaty 8, Chiefs of Treaty Six, the Blackfoot Confederacy, and the Assembly of First Nations regional chief for Alberta – all of whom have called for the firing of Paul Bunner.

“What is it going to take Premier for you to listen to the First Peoples and make significant changes in how you govern our province? We cannot deny the atrocities of the Residential School or the Sixties Scoop survivors. To pretend it never happened is unjust,” writes North Peigan.

If you are unaware, Paul Bunner has famously written racist and homophobic articles in his years as a journalist. In an essay published in 2013, entitled “The ‘Genocide’ That Failed,” Bunner wrote that the Residential Schools which abducted, abused, raped, murdered, and disregarded Indigenous Children (which lasted well into the 1990s) is nothing more than a “bogus genocide story” used to fuel “ripe recruits” for insurgencies.

However, that news was back in June.

This month, after the Alberta Government celebrated their new curriculum review panel (which was created to overhaul the work of the previous NDP government), it was quickly uncovered that Dr. Chris Champion had published and written racist articles directed to First Nation Peoples.

NDP Indigenous Relations Critic Richard Feehan said alongside North Peigan, “Mr. Champion appears to believe that there is no such thing as Indigenous history in Alberta, and he is intent on erasing it from our school curriculum.

“Once again, I am calling on Premier Kenney to dismiss Paul Bunner and dismiss Chris Champion.”

In her own call a few weeks back, NDP’s Janis Irwin stated,  “[Chris Champion] is the editor of the publication that has questioned the experience of residential school survivors and the value of including those in school curriculum. Does that sound a little bit familiar to you? Probably, because it’s the same position adopted by the Premier’s racist speechwriter.”

Some academics have also weighed in on the matter. Jonathan Anuik, an associate professor in educational policy studies at the U of A, stated sarcastically, ” if we just teach a common Canadian history to every single student in this province of Alberta, those conflicts will just go away, because everyone will be assimilated. Everyone will feel proud of the province, proud of Canada, there won’t be any more conflict. It’s very simplistic.”

Rebecca Sockbeson, an associate professor of educational policy studies at the University of Alberta, said hiring someone who doubts the experiences of residential school survivors is “reckless.”

“The earlier that we can introduce to children the truth about Canada’s history, the sooner we can account for what has happened and ensure it doesn’t ever happen again,” she said.

Meanwhile, Residential School Survivors like Lena Wildman are also speaking out against the hiring of Dr. Chris Champion, “It really angered me and it actually really made me feel sad because I thought about the family members that have passed away in residential schools that never made it home, the parents were never told about what happened to those children as well.”

At the time of writing, both Bunner and Champion are still employed by the Government of Alberta.