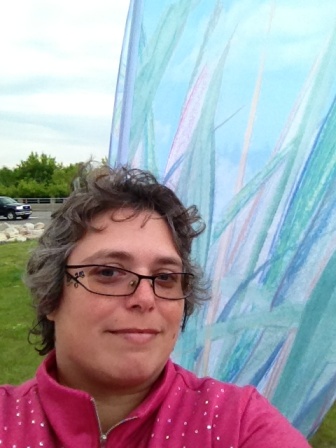 Saskatoon’s Cosmopolitan Park has a more serene look these days, thanks to the City of Saskatoon and Alberta Métis artist Heather Shillinglaw, whose first-ever public art installation, Sweetgrass Sway, was installed at the site atop University Bridge at the end of College Drive in mid-August. Shillinglaw joins Josh Jacobson, Monique Martin, Les Potter and Alicia Popoff and other artists whose works are being represented this year by Saskatoon’s annual public art Placemaker Program.

The temporary installation, explained Shillinglaw, “is comprised of twelve fourteen foot panels placed in an infinity position like the one on the Métis flag. Each panel resembles a large feather. Sweetgrass flows across each piece and when the breeze is blowing the installation brings a sense of peacefulness and comfort. I was particularly delighted when I was approached by a lady walking in the park who said she’d earlier seen what appeared to be a class-room size gathering of young people laying on the ground staring up at the flags and the sky, smiling.” 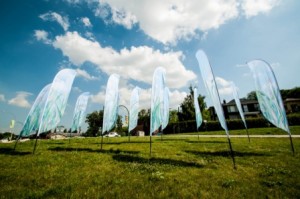 Sweet Grass Sway by Heather Shillinglaw is now on exhbit in Saskatoon. Article by John Copley Photo by Liz Hartman

In all, the Sweetgrass Sway installation measures 12 feet by 32 feet by 14 feet high. It was developed to pay homage to Métis culture and some of the elements that make it special.

“I designed the installation as a representation of the sacredness of the eagle feather, the longevity of the Métis culture and the importance of seeing fresh sweetgrass growing everywhere,” she noted. “The installation was up for about a month before the school year began and it was left well watched but untouched; unfortunately and sadly, the same week the schools reopened one of the flags was bent over and another went missing. I am working on replacements as we speak. It’s too bad that vandals have to break something that represents peace and tranquility, love and friendship. I hope this doesn’t happen again; I have reported it to the police.”

And they are keeping an eye out.

The artist’s statement on the creation of Sweetgrass Sway tells it all: “The wind rustles across the prairies and takes my mind up to the sky. The Sweetgrass plant holds great power with smudges and medicines. I have placed them in the infinity symbol to honour our ancestors: ‘as long as the Sweetgrass Sway so shall the Métis.’ The landscape will forever be our responsibility and provide for us, we need to be reminded of how fragile this relationship is and how we are all connected.”

On August 23 the City of Saskatoon hosted a public presentation by Shillinglaw at the Kehrig Gallery of Fine Art. She spoke to the gathering about the art and the meaning behind it. 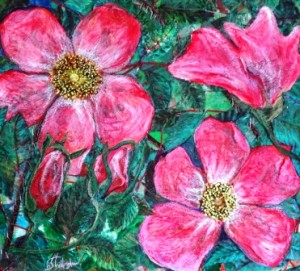 Buffalo Girls III by Heather Shillinglaw is on exhibit at Kehrig Fine Art Gallery in Saskatoon. Photo by Randall Kehrig

“I also have a current exhibit taking place at the Kehrig Gallery,” noted Shillinglaw. “The exhibit, entitled: Buffalo Girl III, will be displayed at the gallery until the end of September. I have about 14 pieces of art in that exhibit; the Buffalo Girl has proven to be quite popular.”

Talking about her journey through life as an artist, Shillinglaw notes: “In 1994 I attended my first Artist Residency at the Banff Centre for the Arts. I worked with the artistic group ‘Minquon-Panchet’; the result was the brainchild for ‘the doors exhibition’ at Slide Gallery in Calgary.  It embraced a group of fellow artists exchanging ideas about why and how culture is art.  This experience also triggered the festival: ‘Fem Spin’ and the piece I created was exhibited in Calgary’s Glenbow Museum; the importance of this work was to speak about my ancestors as country wives; they continue to revisit in many of my paintings.”

Shillinglaw completed the Drawing Program at the Alberta College of Art and Design in 1996 and has since won various scholarships and awards, including the Binney and Smith International Student Competition in New York and second prize in the Peace Hills Trust annual art contest.

A guest speaker, presenter, educator, curator, world traveller and an advocate for women and the challenges they face, Shillinglaw’s artwork has been part of private and corporate collections across Canada for nearly two decades.

Heather’s husband Keith is supportive of her art and helped design and erect the Sweetgrass Sway installation. In addition to her art, Heather and Keith are raising two children. Before starting a family the couple travelled through 15 countries across North and South America to learn about the culture and lifestyles of the continent’s Indigenous peoples. Her work has been presented in many local, regional and national exhibitions in Canada and her voice has been heard at speaking engagements in places such as Paraguay and Argentina, where she’s spoken on subjects that embrace women’s rights, the healing powers of art and the significance of Métis culture in both North and South America. Five years ago Shillinglaw was invited to speak as a panelist in an Indigenous Nations exhibition in Buenos Aires and Mendoza, Argentina. Later that fall she was invited to Ascension, Paraguay, to participate with the First Congress of the America’s within the framework of Education, Human Rights and Environment issues. During this time she also worked with that country’s K-Grade 7 schools as a representative of the first Indigenous school program with Unicef.

“These were tremendous experiences; the things I learned, the people I met, the roads we travelled – it was a great experience and one that has helped me to become a better person and a better artist.”

Shillinglaw has also worked in many schools throughout the Capital Region and beyond, including both Catholic and Public Schools in Edmonton. She’s worked with the Harcourt Arts Centre and in various inner-city programs with the Bissell Centre, McCauley Community League and numerous senior’s centres. As a result of her extensive presence and willingness to participate in meaningful initiatives for the less fortunate, the artist was approached to run an art project that commemorated Inner City Housing’s 25th Anniversary.

“I also have a large retrospective of the last four years of my work traveling to the Grande Prairie Art Gallery,” concluded Shillinglaw. ‘It is forecasted for sometime next year. These works were enabled thanks to funding I have received from the Alberta Foundation of the Arts and Edmonton Arts Council. As an ongoing body of work I am currently working on a project of recent travels to Europe to study romantic painters.  This work is an installation series specifically designed for the gallery. It looks like I’m going to have a busy year in front of me; all we can do is hope.”

For more information about her outstanding creations, visit  www.heathershillinglaw.com