The Writer’s Guild of Alberta revealed the winners of the 2015 Alberta Literary Awards in Edmonton on May 23.

These awards recognize excellence in writing by Alberta authors. This year, jurors deliberated over 150 submissions to select 24 finalists in 8 categories.

First Nation author, Victor Lethbridge, was one such finalist for the R. Ross Annett Award for Children’s Literature, with his book, You’re Just Right. 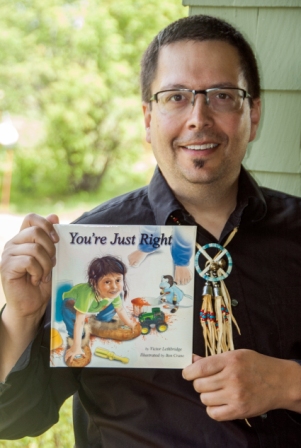 Victor Lethbridge with his children’s book “Youre Just Right.”

This category’s namesake is one of Canada’s most recognized children’s authors having started his career with New York’s Saturday Evening Post during the depression.

Victor’s book did not win in his category and remains one of three to be short listed. Victor comments, “It is an honour to be included in this prestigious group of authors. Thanks for all the friendships made and encouraging words.

The Writers’ Guild of Alberta is the largest provincial writers’ organization in Canada. It was formed in 1980 to provide a meeting ground and collective voice for writers of the province. Its mission is to inspire, connect, support, encourage and promote writers and writing, to safe guard the freedom to write and to read, and to advocate for the well-being of writers.

Victor’s book is published by Tatanka Productions and is available in book stores everywhere or through Sandhill Books. www.tatankaworkshops.com