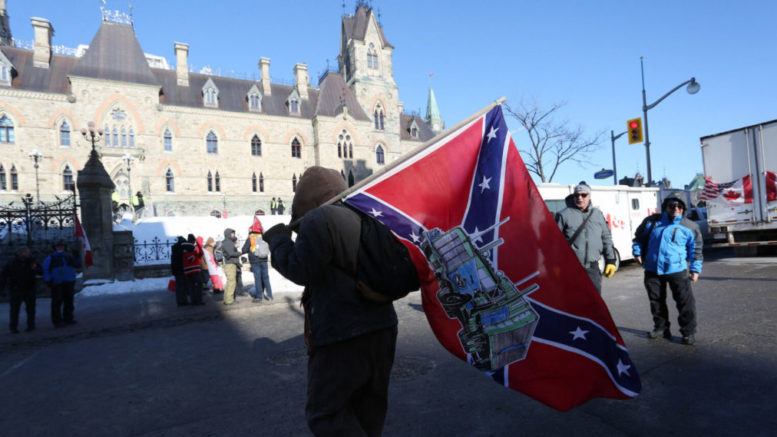 A supporter carries a Confederate flag during the "Freedom Convoy" protests against COVID-19 vaccine mandates and restrictions in front of Canadian parliament in Ottawa, Jan. 29, 2022. (Dave Chan/AFP via Getty Images)

(ANNews) – First Nation leaders in Saskatchewan are adding their voices to the growing list of Indigenous Nations who are condemning the nation-wide protests, known as the ‘Freedom Convoy,’ and the Indigenous cultural appropriation within it.

The statement by the Federation of Sovereign Nations (FSIN) was made after videos of protesters playing Indigenous instruments began circulating on social media.

“The FSIN Executive strongly opposes the actions and tactics of the ‘Freedom Convoy’ protestors, some of whom have been openly sharing ignorant acts of cultural appropriation of First Nations culture and spirituality, publicly and online,” read the statement.

“The FSIN condemns such open acts of racism and ignorance, which are being committed across our traditional Treaty territories.”

The FSIN also retweeted a post from political advisor and treaty right advocate, Andre Bear, that depicted what appears to be two caucasian people at the helm of a pipe ceremony.

FSIN Chief Bobby Cameron said of the protest, “Our First Nations communities have been some of the hardest hit since the beginning of the pandemic. We have been working tirelessly to distribute PPE and supplies to our First Nations because we are highly vulnerable to COVID-19.

“Our families and communities have suffered insurmountable losses because of this horrible virus and our First Nations Chiefs have implemented some of the strictest protocols in the country to keep their membership safe.”

Cameron continued, “This convoy is an insult to our Chiefs, our communities, and to the hundreds of loved ones we’ve lost through this pandemic.  Not only are these protestors risking lives and spreading false information, but they’re also disrespecting our traditional drums, pipes, and medicines.

“It’s a disgrace to see our culturally sacred items being used improperly, without proper protocol, in support of anti-vaccine protests.”

The FSIN are adding their voices to others who are speaking out against the convoy including the Athabasca Chipewyan, the UBCIC, and the Algonquin Nation. The Mikisew Cree First Nation in Fort Chipewyan have also released a statement denouncing the protest and the government’s reaction.

The statement pointed towards an Indigenous protest in 2020 and 2021, in which the Alberta government was swift to target largely Indigenous protesters for showing solidarity with land defenders in BC and Ontario.

When a rail line was blocked in Edmonton, the province was quick to pass Bill 1, the Critical Infrastructure Defence Act, and police immediately moved to enforce it, arresting Indigenous individuals who were peacefully protesting. Calls for the rule of law were loud from the Alberta government.

“Yet, the rule of law doesn’t appear to apply to the occupiers,” said the statement. “There is little to no enforcement while critical infrastructure is blocked, hate speech, intimidation and defacing property is allowed to continue.”

Mikisew Nation Chief Peter Powder stated: “We are troubled by what is happening in southern Alberta and across the country. The occupations show the racism in the way that government and law enforcement deal with Indigenous and non-Indigenous people protesting.

“Our people are overrepresented across the criminal justice system, from victims of crime to over-incarceration. The law applies unequally to our people, who receive criminal records for minor offences, while we watch occupiers violate the law without any consequence.”

On February 8, 2022, at the time of writing, the convoy / occupation in Ottawa was on its 12th day and with no end in sight.