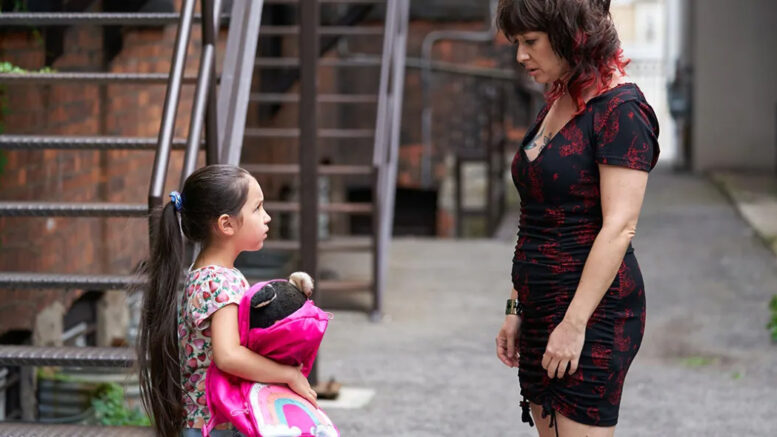 Left to right: Keris Hope Hill as Rosie and Mélanie Bray as Frédérique in Rosie. (TIFF)

Set in 1980s Montréal, Rosie is a film about an orphaned, Indigenous girl named Rosie (Keris Hope Hill).  The story starts when Rosie is taken to live with her Francophone aunt, Frédèrique (Mélanie Bray) or Fred as her friends call her. Fred is the adopted sister of Rosie’s deceased mother, Julie. Fred is on the verge of eviction and homelessness and isn’t at all prepared to care for her estranged adopted sister’s child.

As the film progresses, a heartwarming bond of family and love begins to form between Rosie and Fred. Rosie also forms a bond of friendship and family with two of Fred’s gender-bending friends, Mo (Alex Trahan) and Flo (Constant Bernard). Another character Rosie bonds with is Jigger (Brandon Oakes), a homeless Cree man living on the streets. The relationships between the main characters in the film are all truly sweet and uplifting.

Following the screening of the film at the Edmonton International Film Festival was a live audience Q&A with the Métis writer, director and producer Gail Maurice and the lead actress and co-producer Melanie Bray. The Q & A was led by 89.3 The Raven Radio with Shannon Medaglia as the host.

During the Q&A, Maurice said that Rosie began as a short film which screened at imagineNATIVE in 2018. She said she never expected Rosie to be anything but a short film. But, then imagineNATIVE had a screenwriting workshop which led to Rosie being developed into a feature.

“So I got to talk more about the Sixties Scoop through Rosie’s experience with her parent, her mom and I got to bring to life Flo and Mo and Fred and just be able to play with family and love which are themes in my films,” Maurice said.

Maurice said that she had two siblings that were forcibly taken away from her mother at birth. Despite the fact that her mother had been begging the doctors to not take her children away, they were still stolen.

“I wanted to do a film that honours the children that were stolen and to show that they’re survivors and they’re doing the best that they can. Even though some of them will never be able to find their birth parents because of lost records and such,” Maurice said.

Additionally, Maurice said she wanted to talk about identity which is why she made a bilingual film, where the characters speak French and English. Rosie is often left out when the people around her speak French, since she can only speak English. Maurice said she wanted Rosie to feel isolated when she entered Fred’s world, where she doesn’t understand the language and where everything is foreign to her.

“That’s what children face when they’re adopted out. Everything is foreign to them. But, I wanted to show that love also conquers all,” Maurice said. “And I wanted to tell a story through a little girl’s eyes, because they see the world as a magical place and they accept things around them with non-judgment. So not once does she ever question any of the characters. You know, she just feels love. She just accepts them.”

The film also deals with incredibly sad situations. One of those situations is Flo’s father, who has rejected Flo due to Flo’s queer identity. And, Rosie’s mother Julie was a survivor of the Sixties Scoop. Jigger is homeless in his own home country. Despite the dark things that happen, the film still manages to come off as lighthearted and hilarious; comedy is blended perfectly with the heartbreaking situations. In regards to the humour in Rosie, Maurice said that there is so much humour in Indigenous culture. She said that even when Indigenous people are at a wake, they’re still playing cards and laughing and joking.

“And even though our hearts are breaking and our world is ripped out from underneath us, we’re still laughing amidst our tears. Because, you have to go on, right?” Maurice said.

The characters in Rosie are like that, she added. They’re resilient and they keep fighting and Maurice said she just loves them.

A bright light in the film Rosie is Rosie herself. Rosie is absolutely sweet and adorable. Despite the sadness and loss she’s experienced, she still manages to keep on smiling. She brings light and radiance and warmth to the film. Her laughter and joyful innocence and childlike acceptance of others is a ray of shining sunshine. She accepts everyone around her without judgement.

In a essay about Rosie that she wrote for CBC’s Cutaways series, Maurice wrote: “I wanted to tell a story about people filled with love, strength, and perseverance, and to remind viewers to keep their eyes and hearts open to the beauty in those who have been cast aside or don’t quite fit in. Love and acceptance — that’s what this film is about.”

To conclude, Rosie is a lighthearted movie that is both heartbreaking and heartwarming. It deals with many issues in Canadian society, but still comes off as sweet and funny. Heartbreaking moments are healed by moments of love and happiness. Laughter is medicine and Rosie has plenty of that. Rosie is a story about love and family and perseverance, and I really would recommend this movie to anyone.