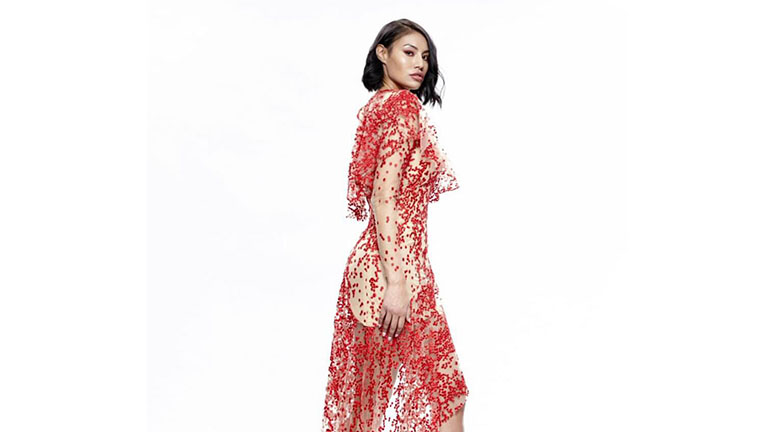 (ANNews) – Anishinaabe and Mohawk fashion designer Lesley Hampton made headlines this week over a dress she made in 2019 that used imagery of missing and murdered Indigenous women, girls and two-spirit people.

The red-spotted, cream-coloured dress – which was showcased during Toronto Fashion Week 2019 – was featured in a picture by Ashley Callingbull on her social media recently.

Much of the critique of the dress comes from how triggering it was to families of missing and murdered Indigenous women, the “sexy” nature of the photos, the bloody aesthetic, and the notion that the brand was exploiting the MMIWG2S+ movement for fashion.

“Posing sexy is NOT the way to honour the cause,” Cree activist Deborah Green wrote online. “In fact, it further perpetuates sexualization of Indigenous women, and reinforces the colonization of our bodies as disposable and open to predators.”

“I’ve been re-traumatized; it brings back all the memories,” said Green, whose sister was murdered in Calgary in 1982.

“I know that a lot of families that have reached out to me have been triggered,” she said. “They were traumatized by that image.”

“The dress itself, had it not been attached to the MMIW fight, would’ve been a fine dress and Ashley could’ve posed how she wanted,” said Green.

While some say that the red spots on the dress look like blood, Hampton said that they were meant to represent each missing sister and affected family.

“We wanted each dot, the vast majority of dots to show the vast statistics of how many people, how many Indigenous women we lost,” Hampton said.

“It was that kind of visual representation to show the mainstream viewers how big of an issue this is and how much we have to bring it to the forefront and fight it.”

“I think it sparked the conversation around victim blaming,” said Hampton, who said that it was not her intention to offend survivors and their family members.

“The Indigenous fashion community is my way into learning about my Indigeneity and learning about who I am as an individual. I apologize so much if my work affected anybody in a negative way and it’s really just my exploration into myself and how I can continue to better develop work in the future,” said Hampton.

“So, to see a dress done in a way where it can be seen in mainstream media and it looks beautiful. But the truth behind it is that it’s not. It’s scary, the stats. It’s the scary truth that we live in.”

“This post didn’t mean to be hurtful or offend anyone. This was for a campaign that an Indigenous designer created for the MMIW movement.”

In 2019, the fashion world (and most likely still is) was predominantly white, thus the dress was made to force the industry to acknowledge the MMIW movement.

Callingbull said it “opened a lot of people’s eyes, especially non-Indigenous people’s… it wasn’t just putting on something in the name of fashion.”

“It’s supposed to be art… it was a statement dress.”