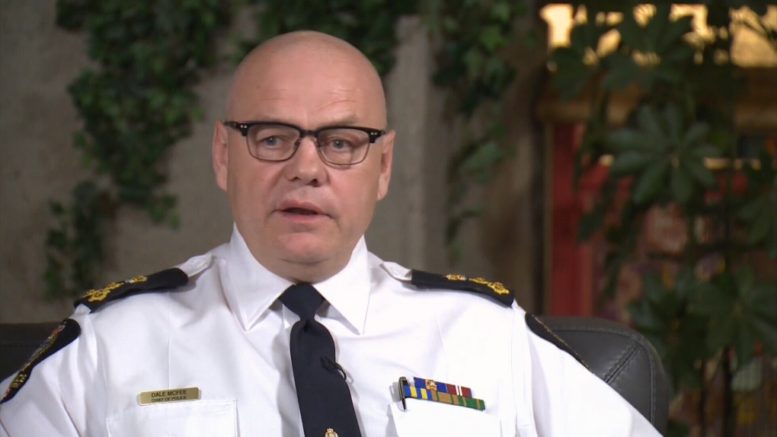 Edmonton Police Chief Dale McFee says there has been no evidence that the tiki torches were used with racist intent at the rallies held in Alberta last month.

(ANNews) – On Saturday Feb. 20, hundreds of people gathered at the Alberta Legislature to protest COVID-19 restrictions, but the rally raised concerns over racism in the province. A similar “anti-lockdown” rally was held in Calgary on Feb. 27. Both rallies included people holding lit tiki torches as they marched through the streets.

Although the rallies were attended and organized by members of known hate groups, Edmonton’s police chief says the department doesn’t have evidence of racist intent behind the use of tiki torches at the rallies.  On March 2, Chief Dale McFee said that the EPS doesn’t condone tiki torches but “some people didn’t know why they were carrying them at the legislature.” He added that if the real intent of the torches was racist, he’d like to see the evidence.

Mayor Nenshi stated that there is “no lockdown to protest in Alberta, schools are open, restaurants are open… It’s been clear for some time that the regular demonstrations against pandemic public health measures are also a vehicle for spreading hate.

“When we see people advertising these marches using pictures from Charlottesville, we know what that means. We know who that’s meant to intimidate,” he said.

“And I will tell you right now, as a person of colour in this city, I will never be intimidated by that.”

Regarding the suggestion that marchers were using the tiki torches for purposes other than hatred, Nenshi tweeted, “It’s not for light, it’s not for heat – don’t be ridiculous.”

I don’t accept this, tweeted Notley, about the suggested naiveté of the torch bearers.”These marches have been advertised using images from the racist, hate-filled Charlottesville march. There is a long history of racist hate groups using torches to intimidate, going back to the Nazis and the KKK.”

The convoy, which was organized by the “Walk for Freedom Alberta” group, began in Lethbridge and travelled up North through Calgary and Red Deer before arriving in Edmonton.

The group claims to stand up for rights and freedoms and “peacefully promote breaches to civil liberties across Alberta.”

Saturday morning before the convoy gathered, Edmonton Mayor Don Iveson released a statement, saying “COVID-19 is not a joke nor a hoax.”

“We are in the middle of a global public health crisis,” Iveson said. “Wearing a mask and following other public health measures keeps people safe and saves lives.”

Iveson also said he had been “made aware” that some of the organizers “may be associated with known hate groups.”

“Edmonton unequivocally condemns racism, misogyny and other forms of hate — such speech is not welcome in our community,” said Iveson.

The protest was attended by those who organized it, as well as other groups.

Concerns about racism were raised after some of the attendees started carrying lit tiki torches during their “walk for freedom.” The tiki torch is a symbol that is historically linked with white-supremacists such as the KKK and was recently used by white-supremacists chanting racist rants at a white nationalist rally in Charlottesville, Virginia in 2017.

On Monday Feb. 22, Premier Jason Kenney released a statement which condemned the event’s connection to hate groups. “Albertans value the constitutionally protected freedoms of speech and assembly. This weekend, protesters gathered at the Alberta Legislature to oppose our government’s public health measures that are in place to protect the vulnerable, and our hospitals, from the COVID-19 pandemic,” Kenney stated.

“I understand that publicity for this event incorporated an image apparently taken from the notorious 2017 Charlottesville torch rally, which was an explicitly white supremacist event.

“Prominent racists promoted Saturday’s protest at the legislature, and individuals attended the event from known hate groups like the ‘Soldiers of Odin’ and ‘Urban Infidels.’ I condemn these voices of bigotry in the strongest possible terms.

“Albertans believe in the dignity of every human being and have no time for these voices of division and hate, or the symbols that they represent.”

Kenney then went on to say that there were likely people with varying views at the protest, mentioning some who came only because they were opposed to the public health restrictions.

“Like any large public protest, there was likely a range of perspectives and motivations amongst those who attended. There is no doubt that some people came just to register their opposition to public health measures, which is their democratic right.”

“But these people also have a responsibility to disassociate themselves from the extremists who peddle hatred and division, and who played a role in this event,” Kenney said.

“It’s clear it was not a march about freedom. It was about anger, hatred and fear.”

“As others have ably explained, the symbol of crowds marching with torches has a long-standing history of threat towards racial minorities as clearly demonstrated by the white supremacist hate rally in Charlottesville in 2017, which was included on this event’s poster,” said Shepherd.

EPS Chief Mcfee reiterated that the rally / protest was “largely peaceful” even though four police officers were assaulted during the protest after attempting to conduct an arrest. No officers were injured; however, Edmonton police are looking at protest footage in order to identify the culprits.

“Usually, it’s best to try and identify and then contact that person later instead of in a heated, dynamic situation.”

Before the Feb. 27 protest in Calgary, police chief Const. Mark Neufeld assured there would be a large police presence.

“The vast majority of these events pass uneventfully with the members of our service working with groups of all sorts to facilitate the expression of constitutional rights in a way that is not only safe but in a way that minimizes the impact on the public and the broader community,” said Neufeld.

Irfan Chaudhry, director of the office of human rights, diversity and equity at MacEwan University, told the Edmonton Journal that downplaying the significance of racist symbols is “disheartening.”

“Symbols are power in right-wing extremism, and the power in itself is by being able to deny that it’s connected to any type of … hateful ideology,” he said.

“Acknowledging the impact that the symbols have on communities of colour — whether or not there’s enough evidence to proceed with any charges, I think that’s another consideration — but it’s that support for the community that I think is missing.”