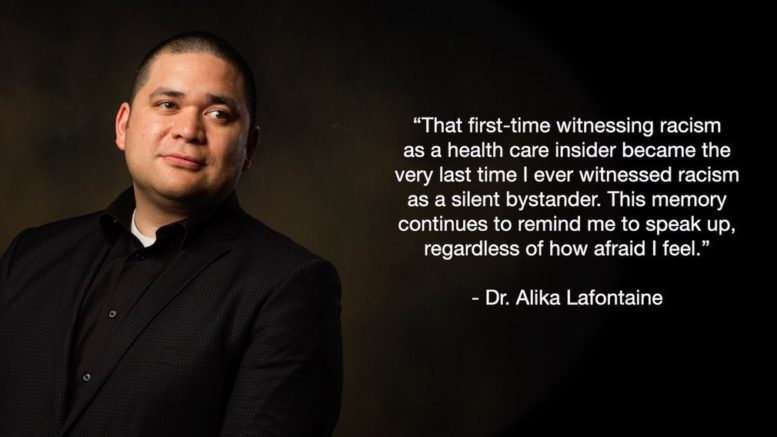 (ANNews) – Dr. Alika Lafontaine, Associate Clinical Professor and anesthesiologist at the University of Alberta Hospital, appeared on the February 18 episode of the First Nation Health Managers Association Virtual Town Hall to speak about anti-indigenous racism in the health system and the newly-created Safespace Networks.

BC Association of Aboriginal Friendship Centres [BCAAFC] has partnered with the Safespace Network pilot project to give Indigenous patients across BC an anonymous reporting and learning platform – a safe space – where they can discuss their healthcare experiences.

Dr. Lafontaine began his talk by explaining what his profession as an anesthesiologist entailed, “I tried to figure out a quick way to explain what we do and I came up with the term medical ninja. We’re highly specialized, we’re very mysterious, and we’re the last thing you see before you lose consciousness.”

“As a front-line provider we’re exposed to situations where passing along COVID is actually very, very high-risk. Probably the highest risk out of all the different types of physicians.”

Dr. Lafontaine said that his involvement with Safespace Networks stemmed from an experience his brother had in the healthcare system. “He was really concerned that the feedback he got from his medical provider wasn’t (addressing) the actual problem he had.”

His brother reached out to him and asked for his medical opinion, which Dr. Lafontaine believed to be appendicitis. However, this was a totally different diagnosis from the initial doctor.

In order to find out what the decision-making process was in the first diagnosis, Dr. Lafontaine did some research. “What I found out pretty quickly was that there were many different things missing within that interaction.”

“It was a very brief conversation, there wasn’t a lot of medical history taken, the provider had not done physical exam, there had been no lab work sent off – usually you send an ultrasound or a CT scan… and you use those to make this diagnosis.”

After getting his brother a second opinion, it was revealed that his brother did have appendicitis and that it had ruptured. “He could’ve died if he had gone home.”

“I remember talking to him the next morning after all this had happened and there was a line that really stuck with me…” said Dr. Lafontaine.

“He said… y’know, Alika. At the end of the day, it doesn’t matter what I’ve accomplished in my life. When I put on that hospital gown, I’m just another Indian.”

This is quite an important issue for me as well, as I once went into a medical clinic for back problems and they told me I had to get an organ removed (needless to say I got a second opinion). And a cousin of mine was put into a medically-induced coma a little while back only for the doctor to let his oxygen shut off for 7 minutes in gross medical misconduct.

“Patient harm is the third-leading cause of death in Canada… When you go for medical care, on average, 10% of people actually run into some medical harm,” continued Dr. Lafontaine.

He then went to discuss how the system is designed to “swallow truth” and put the “burden of change on your shoulders. You have to feel like it’s so bad that you’re willing to risk it all.”

“In systems where racialization is systemic, punishment doesn’t necessarily lead to change. In the example of Joyce [Echaquan], they fired the health providers that were part of the incident, but in a system that normalizes treatment of patients and normalizes racism, it will eventually create another person who racializes patients as well.”

So what Safespace offers, said Dr. Lafontaine, “is a way to share anonymously, your story. And for it to be captured and combined with other stories so we can discover patterns. Those patterns are then validated through a series of steps and connections within the health system. Once we have some confidence in the repeatability and reliability of these stories, we then share them with the health system and with patients so we can all make better decisions.”

“As a patient, if you know that going to a clinic you might be exposed to a racialized encounter… you can avoid that clinic or you can be empowered on how to work through those types of conflicts and those types of interactions in a way that leads to better care.”

The First Nations Health Managers Association (FNHMA) Weekly Virtual Town Hall is a podcast that features speakers from different organizations who provide credible and reliable information, resources, and updates about what their organizations are doing to combat COVID-19. Tune in on Thursdays at 1 pm EST at ihtoday.com. Click here for earlier episodes.