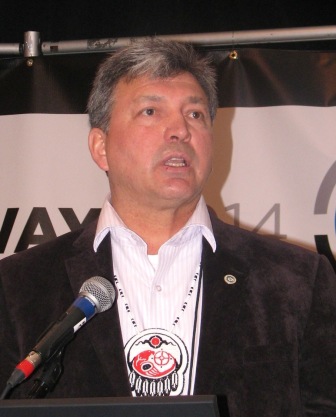 Alexis, a retired RCMP officer and former chief of Alexis First Nation, is more than half way through his two-and-a-half year term. He said he believes the AFN is a needed lobbying and advocacy group regardless of tensions that have recently erupted within the national organization.

“It (the AFN) definitely has its place because you need a body representative to lobby federally, provincially – even municipally – and internationally on the issues relative to First Nations across this country,” he said. “And every province is unique, even within the Treaties and the nations we’re unique because of the different languages and cultures.” 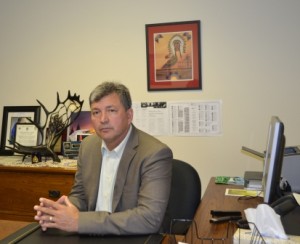 For several months AFN chiefs have been lobbying against recent budget cuts that will limit how often the chiefs meet and do business.

“It’s control. With all the federal bills that he’s (Prime Minister Harper) presented, it’s all been with a lack of consultation, lack of free, prior and informed consent,” said Alexis.

Referencing legislation that has been passed such as the omnibus budget bill, and the recent First Nations Financial Transparency Act, he said that governments are slowly doing away with Treaty obligations. In regard to consultation, passing legislation that averts Treaty liabilities is evident.

“I would highly suggest that it’s a fast tracking to approve certain initiatives by the federal and provincial governments and it goes back to revenue sharing. They don’t want to share revenue. So, you start creating these bills to fast track initiatives such as TransCanada and Northern Gateway to move the bitumen.”

On a provincial level Alexis is “cautiously optimistic” about newly appointed Premier Jim Prentice. He is also skeptical about Prentice’s acquisition of the Aboriginal Relations portfolio and questions his intentions. Upon his swearing-in Prentice appointed Edmonton-Gold Bar MLA David Dorward to the task of assistant deputy minister- a venture Alexis is not too impressed by.

“If he’s (Prentice) so sincere about First Nation and Aboriginal issues why didn’t he appoint a First Nation person?” posed Alexis.

He expressed disappointment in the premier’s comments dismissing a need for an inquiry into missing and murdered Indigenous women. In September Prentice said he preferred to “get on with the solutions rather than studies at this point.” However, Alexis wondered how the premier would come up with the solutions without first knowing the answers.

Alexis, who holds the AFN portfolio for community safety and policing said an inquiry is needed and will likely reveal that Canada still harbours hidden, systemic, racist outlooks towards its Aboriginal people.

“Canada is supposed to be one of the most exemplary nations in the globe in terms of human rights,” said Alexis.

“So, you do a public commissioned inquiry on murdered and missing people in this country, and then you find there’s systemic racism for example – how is Canada going to look on an international stage?”

He said the AFN is contemplating taking their own action on the matter. As of late, First Nations leaders have had preliminary discussions to conduct an inquiry.

“We’re getting to a point where we’re saying we’re not going to wait anymore…If this country’s not going to do it perhaps we need to do our own.”

Alexis suspects that ultimately, the Progressive Conservative’s priority in regard to Aboriginal Relations is resource development and for on-going contentious consultation issues to be resolved.

“Oil and gas is Prentice’s motivation. His team is bitumen ready,” he said.

Alberta First Nations did not agree to the provinces Bill 22, Aboriginal Consultation Levy Act and continue to reject and boycott the legislation. They say they were never consulted about the act and that it violates Treaty rights. First Nations are asking for a seat at the negotiating table and a say on developments that affect them.

“More importantly, we want total inclusion,” declared Alexis. “We come in after the fact and are told (by government): By the way, this is what we’re going to do.”

He said it’s time Canada took seriously the implementation of Treaties and that also equates to revenue sharing. Alberta is the most bountiful province in the country annually exporting billions of dollars in resource related projects.

Alexis referenced a study done by Alberta chiefs which revealed that if First Nations received only 5 per cent of provincial resource revenues they would be more than capable of financial independence.

“What about all that so called “crown land.” When you talk about Treaties, crown lands are disputed lands when it comes to our side of the fence because we never gave up those lands to be totally immersed by them,” he said. “Equal decision making was supposed to happen and it’s not happening.”

Alexis believes the majority of First Nations would be in support of exploring resource development, but would proceed cautiously while considering the effect on the environment.

“We have to have a balanced approach because we have to be stewards of Mother Earth but at the same time we have to survive here as well. So, we have to be cautious on how we conduct business.”

It’s important that First Nations start fast tracking opportunities for economic development, and they need to invest in one another more, he added.

“Anytime a First Nations opens up a business I have a good feeling in my heart. There are several First Nations in this province that are doing very well in embracing economic opportunities and it’s good to see that.”

The AFN continues to address other concerning challenges like the child welfare apprehension epidemic and education issues.

“The Educational Memorandum of Understanding (MOU) is a positive in my observation. There’s an opportunity to participate in a bigger way in education for our people.”

The MOU is an agreement made between the AFN in Alberta, the province and federal government to work toward strengthening learning and educational success for Alberta First Nation learners.

Although Treaty 6 chiefs abstained from the vote to approve the plan, the MOU was approved in September 2013. Since then all other parties agreed to move forward on implementing the MOU Long Term Strategic Action Plan.

Successes in gaming is an undertaking that Alexis is proud of after decades of hard work by First Nations to gain approval to build and operate casinos. All five First Nations owned casinos in the province are flourishing. The businesses allow First Nations to participate in the main stream economy and have created countless jobs for both Aboriginal and non-Aboriginal people.

The province however, put a cap on the amount of casinos to be built on reserve lands which has stunted other projects from going forward. The AFN is advocating for the restriction to be lifted so that additional First Nations communities can benefit from gaming opportunities.

Going forward the AFN will continue to address on-going challenges and they will push for the full implementation of the United Nations Declaration of the Rights of Indigenous Peoples.

“Although Harper called it an aspirational document Canada needs to remove aspirational out of it and get on with business,” ended Alexis.