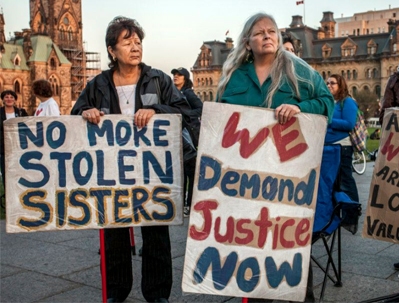 The RCMP have released  their 2015 Update to the National Operation Overview on Missing and Murdered Aboriginal Women which reports 32 Aboriginal female homicide cases within RCMP jurisdiction since May 2014 (more than two-thirds of all female homicides during that time ) and another 174 reports of missing Aboriginal women in all police jurisdictions.

“The numbers of missing and murdered Indigenous women cannot remain a mere statistic,” said AFN National Chief Perry Bellegarde.  “It is time for action that shows the lives of Indigenous women and girls matter.  Today’s report is yet another urgent call to action on a national crisis.  We cannot ignore the evidence or the reality.  There is a significant and tragic over-representation of Indigenous women among the missing and murdered in this country. This is not just a First Nations issue, this is a Canadian issue and we all have a role to play.”

In 2014 RCMP reported a total of 225 unsolved missing and murdered cases across all police jurisdictions in Canada.  Current updated data shows 106 unsolved homicide cases and 98 unsolved missing cases (unknown or foul play suspected circumstances) remain outstanding.  Other key findings include that the vast majority of victims of violence, Aboriginal and non-Aboriginal alike, had a relationship with the offender.  This is consistent with the 2014 report.

“The RCMP is taking some important steps to work with First Nations,” said AFN Regional Chief Cameron Alexis who leads the policing portfolio for AFN.   “All jurisdictions need to look at what they can do to ensure that Indigenous women and girls are safe and secure.  We need a national inquiry to get to the root causes and find long-term solutions, and we need immediate action to ensure they’re safe now.  All municipal and accredited police services in this country including the military police need to work together on Aboriginal policing issues such as missing and murdered Aboriginal women.  A National Aboriginal Policing Forum was advocated for but the federal government did not respond in kind even though they continue to publicly state $25 million has been set aside.  There is still no evidenced action!  As an outgoing Regional Chief, the federal response was very disappointing for me while trying to serve our people.”

First Nations continue to press for adequate support for prevention and safety intiatiaves and a National Public Commission of Inquiry on Missing and Murdered Indigenous women.

A national gathering on justice and policing (an outcome from the February 2015 National Roundtable on Missing and Murdered Indigenous Women and Girls) is expected to be held in Winnipeg, Manitoba later this year as an opportunity to craft a detailed plan for coordination and change across a number of jurisdictions.

The report is available at http://www.rcmp-grc.gc.ca/pubs/abo-aut/mmaw-fada-eng.htm.