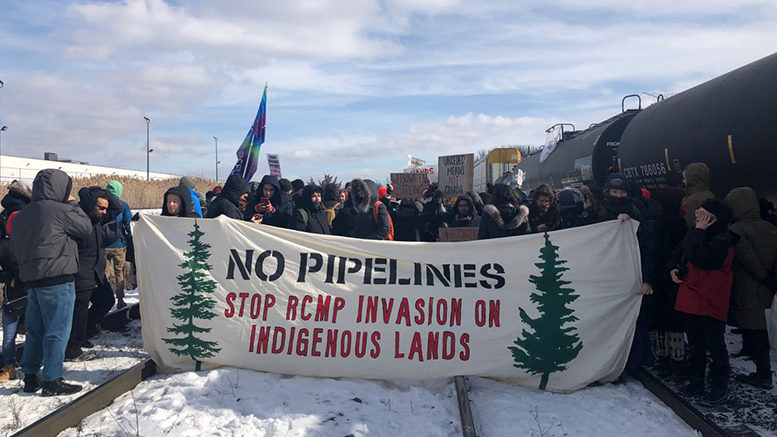 (ANNews) – Last Friday, the RCMP forcibly entered an Indigenous resistance camp in B.C. that opposed the construction of the Coastal Gaslink (CGL) pipeline to impose a provincial injunction that allowed the project to continue, arresting many protesters in the process.

The “coyote” resistance camp has halted CGL’s plans to drill a tunnel underneath the Wedzin Kwa river since Sept. 25.

The company says that construction of the Coastal Gaslink is already more than half completed, with most of the route being cleared and about 200 kilometres of pipe already in the ground.

To enforce the injunction, the RCMP entered camp coyote and arrested approximately 30 people, including Indigenous Elders and land defenders and two journalists.

After the company failed to comply with an eviction notice issued by the Gidimt’en Checkpoint, which controls access to part of the Wet’suwet’en territory, protesters erected blockades that stranded the CGL employees.

The RCMP described the raid as a rescue mission for the 500 workers in two CGL camps, to which the company said were unable to get food, water or supplies due to blockades.

Police said that when they arrived at the camp, they read the provincial injunction notice and warned those inside the camp to leave multiple times before they forcibly entered and made arrests.

According to the Narwhal and APTN, the RCMP used canine units and were equipped with assault rifles and snipers.

This makes 2021 the third year in a row to see Canada enforce injunctions with a militarized police force.

A few of the arrested have been released with the condition they steer clear of the Coastal Gaslink project.

Wet’suwet’en members were also told they were allowed to go to the area for cultural practices like fishing, hunting, and trapping, but must stay 75 metres away from any worksites.

Wet’suwet’en hereditary Chief Woos believes that neither the police nor the courts have the right to tell people where they can and can’t go, “It is Cas Yikh territory. That means we’re the stewards. We’re the ones that make decisions as to who can go on our territory. And it’s not up to CGL. It’s not up to a court system to decide that. It’s not up to them.”

Despite elected Wet’suwet’en officials approving the CGL project, the hereditary chiefs — who are viewed by many as the rightful leaders — are completely against the pipeline. The hereditary chiefs believe that because they never ceded, surrendered, or lost title to territory in war, the land is theirs.

In an online statement issued by the Office of the Wet’suwet’en, 12 hereditary chiefs representing five Wet’suwet’en clans said they, “are seeking to protect clean rivers and water ways, clear air and yintah for generations to come.”

“We have not nor will ever support the CGL pipeline… we declare that RCMP are not welcome on our territories,” said the chiefs.